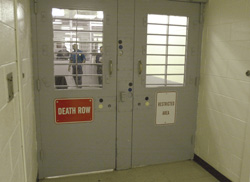 Since 1998, the Death Penalty Representation Project has assisted 270 inmates in 24 states. Photo by AP Photo/Lou Krasky.

After Joe Lee Guy was convicted of murder and sentenced to death in Texas for his role in a 1993 convenience store robbery—he had served as an unarmed lookout—attorneys from Minneapolis-based Dorsey & Whitney took up his case on appeal. They had a hard time believing some of what they found—or didn’t find—in the files from his trial.

The court-appointed attorney who represented Guy had been disciplined more than a dozen times by the state bar. In the course of representing Guy, the lawyer hired an unlicensed investigator who was named the beneficiary of the $750,000 estate of the victim’s mother after coaching her on her testimony.

Working pro bono, the Dorsey & Whitney attorneys found more than 50 witnesses who could tell Guy’s back story: an IQ of 77; an abusive, neglectful and drug-addicted mother; and an alcoholic father who was murdered. But the defense investigator had not found any such witnesses.

The Dorsey team managed to get Guy’s death sentence vacated in federal court after the court deemed his counsel ineffective and described the investigator as having “transitioned from defense investigator to mercenary.” Guy was resentenced to life in prison without parole. That was the best he could get, given that there was no question about his role as an accessory, says Steven J. Wells, a partner at Dorsey who worked on the case.

Wells remembers an assistant U.S. attorney complaining at the first federal court hearing that “ ‘they’re making it sound like a big soap opera.’ We weren’t making it sound that way,” he says. “It was that way, except that someone’s life was at stake. You couldn’t believe this could happen in this day and age, but it had. The facts were just unbelievable.”

In September 2011, Dorsey was one of three firms that received exceptional service awards in a ceremony marking the 25th anniversary of the Death Penalty Representation Project’s creation in 1986. The other recipients of that year’s awards were Washington, D.C.-based Arnold & Porter and Fredrikson & Byron in Minneapolis.

The project only began keeping an official count in 1998 of the cases participating lawyers have worked on, but since then it has assisted 270 inmates in 24 states. Of those, 52 have either been released from prison or taken off death row through resentencing. That’s a “success” rate of just about 20 percent in some of the toughest cases in the U.S. justice system.

“These cases are the workaday cases,” says Steven N. Schneebaum, a litigation partner at Fox Rothschild in Washington, D.C., who works pro bono on death penalty cases through the ABA project. “These cases are under the radar, where you read a one-paragraph notice in the New York Times. They’re not glamorous. They’re gritty. You have to have the self-confidence to find your own reward in them. If you think you’re going to win, you may be disappointed.”

Officially, the ABA has no policy position on whether the death penalty should be abolished. In an era during which no national consensus has emerged about the death penalty’s future, the ABA instead has focused primarily on issues relating to the underlying fairness of how the capital punishment system operates. The ABA has pursued that commitment through two key projects, one systemic and the other operating in the trenches of specific death penalty cases.

In 1997, the ABA’s policymaking House of Delegates adopted a recommendation (PDF) urging any U.S. jurisdiction that imposes capital punishment to declare a moratorium on executions until the jurisdiction implements policies and procedures “intended to (1) ensure that death penalty cases are administered fairly and impartially, in accordance with due process, and (2) minimize the risk that innocent persons may be executed.”

That policy led to the creation of the ABA Death Penalty Moratorium Implementation Project in 2001. The project’s primary task is to conduct in-depth assessments of how capital punishment is administered by the states. So far, the project has conducted assessments in 10 states—most recently Kentucky and Missouri—and reports covering Texas and Virginia are due to be issued in early 2013. At that point, the project’s assessments will have addressed capital punishment procedures in jurisdictions that account for 65 percent of the executions carried out in the United States, says project director Sarah E. Turberville.

While none of those states have implemented moratoriums on executions, the assessments have fostered efforts to bring more fairness to the system, both in assessment states and other jurisdictions, Turberville says. In 2009, for instance, the Florida Supreme Court adopted revisions in jury instructions for capital cases that closely followed language recommended by the project. And the U.S. Supreme Court cited the project’s work in Maples v. Thomas, a case decided earlier this year.

While the Death Penalty Representation Project shares a commitment to bringing more fairness to the capital punishment process, its specific focus is on ensuring that well-trained and effective counsel are available to all death row inmates, says project director Robin M. Maher. In addition to partnering with judges and bar associations to recruit volunteers to take on cases, the project provides technical assistance and resources to its volunteer counsel.

The project also supports adoption—by every jurisdiction with the death penalty—of statutes, rules and procedures that are consistent with the ABA Guidelines for the Appointment and Performance of Defense Counsel in Death Penalty Cases (PDF), which were adopted by the House of Delegates originally in 1989 and then adopted in a revised form in 2003.

“Our work is about counsel, and it’s about the fairness of the proceedings,” says Maher. “We’ve done international work with judges, academics and lawyers in other parts of the world, and it’s pretty flabbergasting to them when they hear there are people on death row in the United States who don’t have lawyers at all.”

While innocence projects based at some law schools around the country only take cases with credible claims of innocence, the ABA’s project—which has a current docket of about 100 cases—does not seek to weed out the tough cases, Maher says. But on the basis of available volunteer lawyers and resources, “we turn away far more people than we can help,” she says. “It’s an uncomfortable feeling to determine whose case is most urgent.”

O’Melveny & Myers, for instance, has taken on five cases through the project over the past five years, says David A. Lash, managing counsel of the firm’s pro bono program. He and Maher choose the cases.

“She will call and say, ‘I have four cases here. Will you take a look at them?’ ” says Lash, who is based in the firm’s Los Angeles office. “I look to see which are most viable and interesting in terms of legal cases, and which might be the most appealing to our lawyers. These are very big commitments to take on; habeas proceedings require hundreds and hundreds of hours.”

Attorneys have a variety of motivations for participating in the project, Lash says. It might be a desire to remedy an injustice, professional development opportunities, a philosophical opposition to the death penalty—or a little bit of all three.

Michael Siem is a principal in the New York City office of Fish & Richardson whose practice focuses on patent litigation, but when he started working pro bono on capital cases in the mid-2000s as a young associate, he had little lead courtroom experience, and the opportunity was too tempting to pass up. At his firm, like most others, “they save the best stuff for people who are already trained,” he says. “It’s easier for clients to understand: ‘The senior trial guy—he’s going to be handling this.’ ”

In his first case for the project, Siem handled an appeal that ended up before the Virginia Supreme Court. “It was just a fantastic opportunity for a young associate,” he says. “How often do you get a chance to argue in front of any supreme court?” In cases with younger associates taking the lead, Siem notes, his firm always pulls in senior partners to monitor their progress, “so you’re not a second-year associate, fresh out of law school, being told, ‘Go save this guy’s life.’ ”

The opportunity to hone courtroom skills is important, says Lash, but the draw of participating in capital cases goes beyond just that. “Younger lawyers get to be involved in a very serious way in strategizing and executing a legal strategy that they might not get in more commercial cases—they’re able to stretch their wings and take on more responsibility,” he says. “It’s a very powerful feeling to use your law degree to change something that appears to be unjust. When somebody’s life is on the line, it’s a very profound experience.”