Attractive Nuisance? When Fun Factor Overshadows Risk, Lawsuits Are Sure to Follow 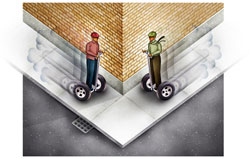 Admit it, you’ve always been kind of intrigued by the Segway. It’s that battery-powered gizmo that sort of looks like a high-rise handlebar attached to a couple of wheels. The Bedford, N.H.-based manufacturer calls it a “personal transporter.”

It’s used by mall security guards and by police in many urban settings, and it’s a good way to cover a lot of ground without overexerting oneself. For that reason—and for the fact that it looks like it’d be a hoot to ride/drive one—the Segway is popular with entrepreneurs who offer tourists a unique sightseeing experience. But sometimes the sights include the local hospital.

The Annals of Emergency Medicine sounded the alarm in a 2010 study that reached this conclusion: “The severity of trauma in … patients injured by the use of the [Segway] is significant. Further investigation into the risks of use … is warranted.”

And since that time, Segway injury lawsuits have appeared on court dockets with increasing frequency. Part of the problem is that sometimes people who find riding an escalator to be a white-knuckle experience are the ones who find themselves piloting a vehicle that is all about maintaining balance.

Another problem is that sometimes riders are given inadequate training.

A Segway dealer in Richmond, Va., was sued three times last year by customers who went on the shop’s tour of the city. All three suits, filed in Richmond Circuit Court, allege that the Segways lurched or lunged unexpectedly, and that customers were not properly instructed on how to control the vehicles.

Fortunately for Buck Ward, who owns Segway of Richmond, he has insurance, but he was quoted as saying that the coverage “is both difficult to get and very expensive for a small business like ours.”

These types of lawsuits are becoming common enough that some law firms have developed a sort of side specialty in Segway litigation.

Roxanne Lamonde, risk manager and senior paralegal at Segway Inc., said in an emailed statement, “Our products are vigorously tested for safety, quality and durability.”

She added that Segways come with a safety video and reference manuals, and that “helmets are always recommended when riding.”

Um, yeah, about that. During a September 2009 Segway Challenge held at Southern Connecticut State University, a student operated a Segway with his eyes covered and without a helmet. He fell and suffered a traumatic brain injury, and in December he won a $10 million verdict against the company.

The plaintiff’s attorney claimed that the Segway reps neither required nor provided helmets for participants.

Until courts and municipalities can figure out how to classify these newfangled personal transporters—Are they motor vehicles? Is the operator a pedestrian?—the Segway will remain in a sort of legal limbo.

In the meantime, go ahead, try one out. You know you want to. But hey, let’s be careful out there.