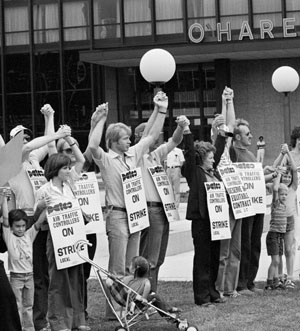 On the morning of Aug. 3, 1981, about 13,000 members of the Professional Air Traffic Controllers Organization shook off six months of intense negotiations with the federal government to begin a strike.

Inflation was hurtling toward 20 percent. Unemployment was creeping toward 11 percent. But PATCO’s short history was one of aggressive contract negotiations. And what emerged was a bare-knuckle fight between the nascent Reagan administration and organized labor—a fight that came to epitomize a decline in the political influence of unions.

Under Executive Order 11491, the work action was illegal; federal workers had the right to organize and engage in collective bargaining, but no right to strike. But within PATCO, patience with the new Reagan regime had run thin. Now they wanted higher pay, fewer hours, and better and earlier retirement benefits.

Formed in 1968, the union had already conducted several work slowdowns. In July 1968, it initiated what it called Operation Air Safety, a work slowdown accomplished by adhering rigidly to archaic work rules and procedures. In 1970, commercial air traffic was nearly brought to a halt when more than 2,000 PATCO workers called in “sick.” And in the 1980 presidential election the union angrily refused to back the incumbent Jimmy Carter, instead supporting Ronald Reagan, a former president of the Screen Actors Guild.

In June 1981, union leaders and government negotiators came to an agreement that would raise wages for air traffic controllers by as much as 11 percent. But when presented with the tentative contract, PATCO’s rank and file rejected the government’s offer, and a vote was made to strike.

Because of PATCO’s history, the airline industry and federal aviation authorities had long before crafted detailed contingency plans to deal with a strike. Within two days, a stopgap group of supervisors, nonstrikers and military controllers had returned air traffic to 75 percent of its normal level.

On Aug. 4, barely seven months into his administration, President Reagan raised the stakes: Rather than depend on the courts to force the workers back to their jobs, he threatened to fire any air traffic controller who did not return to work the very next day.

“I respect the right of workers in the private sector to strike,” said Reagan, announcing his demand that they return to work. “Indeed, as president of my own union, I led the first strike ever called by that union. … But we cannot compare labor-management relations in the private sector with government. Government cannot close down the assembly line. It has to provide without interruption the protective services which are government’s reason for being.”

The next day, Reagan fired the 11,345 union employees who ignored his presidential order. On Oct. 22, 1981, PATCO was decertified.

The strike, and Reagan’s reaction to it, has long been recognized as a pivotal moment in his early tenure, as well as a rallying point for resurgent conservatives. And as the resources of state and local governments dwindle, the role of public service unions continues to be a matter of bitter public debate.