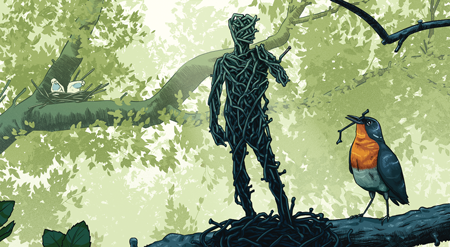 It’s often said that you must know the rules before you break them. But why is that, exactly? It’s a question worth pondering.

I recently flew coast to coast sitting beside a young filmmaker with an MFA from New York University. He’s a finalist this year at the Cannes Film Festival. I asked him whether he’s ever met someone who wanted to do something with the camera that nobody had ever thought of doing before—something boldly original.

“I think you’re describing me before I got serious!” he said.

“It would be foolish,” he said.

Mastery of any discipline begins with imitation. You must know what’s been done before, and you must know about technique. You must know the rules of the discipline so that you can produce consistently strong results. Otherwise, you’re just acting in ignorance, and the quality of your results will be wildly variable—and generally poor.

So great pianists play in very much the same way, and their individual virtuosity comes through only in subtle ways. Professional golfers may look very different from one another, but they’re very much alike in the fundamentals—especially how the clubface, shoulders, feet and body look at the moment of impact with the ball. If there’s variation among true experts, it’s at the fringes. And all true experts have begun by imitating their great predecessors.

The same is true of writers. You have to know certain rules. I can think of eight offhand:

Those are good rules.

But many of us, at an impressionable age, picked up lots of bad rules that no reputable authority countenances. Unlike the eight just listed, they’re all simple prohibitions:

Those aren’t really rules. They’re the stylistic equivalent of hearsay upon hearsay. Reputable writing authorities repudiate them, one and all. So part of the problem is to figure out what the real rules are—and then figure out when it makes sense to break them.

Notice that the simple-Simon prohibitions above are probably intended for young children. An analogous rule would be that of the Suzuki method of violin instruction, in which children are taught that before playing, they must begin with a zip-and-step (parting their feet [zip] and then moving the right foot forward [step]). But imagine the reaction you’d get from a virtuoso violinist if you accused them of violating a “rule” by not zipping and stepping at the beginning of a performance. It would be absolute nonsense.

When it comes to supposed rules of writing, it’s good to know what’s at their foundation. Some are aimed at curing young schoolchildren of elementary blunders. We teach kids not to begin with And or But precisely because they tend to begin all their sentences that way (especially And), and they need to be weaned off the habit. We teach them not to begin a sentence with Because just to keep them from perpetrating sentence fragments by mistakenly putting a period rather than a comma after the Because clause.

We teach them not to write one-sentence paragraphs so they’ll learn how to compose well-developed paragraphs. We teach them to write without I and me because beginners easily become addicted to mentioning themselves excessively—and need to learn to write with a more objective tone. All the while, we ignore the fact that they’ll ultimately need some sentence-starting conjunctions, some Because sentences, some one-sentence paragraphs and some uses of first person.

Other “prohibitions” are mostly nonsense and always have been: the idea that you mustn’t end with a preposition or must never split an infinitive. The great H.W. Fowler demolished these false idols in his 1926 A Dictionary of Modern English Usage. Nobody has successfully countered him. Most writing authorities, if they mention these bugaboos at all, take pains to eliminate them.

What about contractions? Again, it’s arguably useful to teach children a type of formal prose style before they mature and learn to relax their style (relax, I said, not be lax). It’s good that they learn you are, and later you’re, so they’re not hampered by a fundamental confusion between your and you’re. The same could be said of their and they’re (and there, for that matter). But contractions are an effective antidote to stuffiness, and they aid readability—demonstrably. Consider this sentence from The Law of Judicial Precedent (2016): “To say that a trial court or appellate court generally won’t rethink a prior ruling isn’t to say that it can’t.” An uncontracted style there will strike many as either stilted or downright laughable.

There are Bluebook rules worth breaking. One is the notion that explanatory parentheticals are “recommended” with many citations—a convention that spoils any product with in-line citations. Even proponents of in-line citations, such as Justice Scalia and Judge Richard Posner (no fan of the Bluebook), acknowledge that trailing parentheticals bastardize paragraphs when the citations are interlarded within the writing. Another is the idea that underlining is an acceptable practice in court documents.

Still, I would never say you shouldn’t learn established citation form just because you can later decide to ignore certain elements of it.

When it comes to breaking rules, Paul J. Kiernan of Washington, D.C., cites the Harlem Globetrotters basketball team. They know how to play basketball, make passes, dunks and so on, but they’re entertaining because they then break or bend those rules for comic effect. If they couldn’t play a real game, their breaking the rules wouldn’t work. Or consider the comic classical pianist Victor Borge, who followed the same pattern. Or if you appreciate fine couture, think of Alexander McQueen and what he did with clothing design.

Only after you can truly perform as the discipline requires can you break rules to good effect.

Bryan A. Garner, the president of LawProse Inc., is the author of many books, including Garner’s Modern English Usage (also available as a mobile app), The Chicago Guide to Grammar, Usage, and Punctuation and The Law of Judicial Precedent co-authored with Justice Neil M. Gorsuch and 11 other appellate judges. Follow on Twitter @bryanagarner.