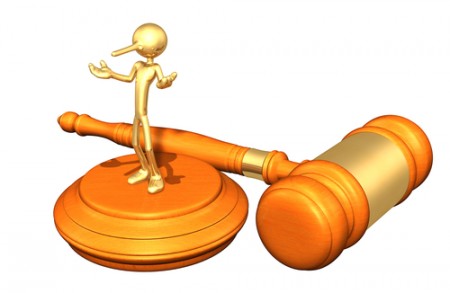 In 1998, Luther Jones was convicted in California of molesting his former girlfriend’s daughter and sentenced to 27 years in prison. But the girl, who was 12 when she testified about the alleged sex abuse, recanted in 2016.

The girl told Lake County District Attorney Don Anderson that she was persuaded to testify against Jones by her mother, who was then battling him for custody of their 2-year-old child.

Jones of Kelseyville, California, was released from prison in February 2016 after Anderson, along with a new defense attorney, Angela Carter, brought a writ of habeas corpus based on the fresh evidence. Two months later, Jones was officially exonerated. He died in December at the age of 71.

The Jones case didn’t sit well with the district attorney, prompting him to launch a new, much-heralded crackdown on perjury.

For the initiative, Anderson formed a perjury prosecution unit, which appears to be the first of its kind in the country. The unit—headed by Deputy District Attorney Daniel Flesch, one of 14 deputies in the prosecutor’s office, and staffed with a full-time investigator—has the task of exploring and prosecuting perjury cases.

“We’re plagued with people lying,” Anderson says. “If people get on the stand and lie, they deserve to be punished.” By late November, the unit had received about 40 referrals, mostly from other attorneys, according to Anderson.

But even though perjury is perceived as a problem, proving that someone committed the crime can be extremely challenging. To obtain a conviction, prosecutors must show not only that a witness lied under oath but also that the lie was intentional. Complicating matters is that well-intentioned witnesses make honest errors.

“People make mistakes; they have failures of memory,” says Barry Pollack, president of the National Association of Criminal Defense Lawyers. “There are many times where one person may have a different perception of an event than another person.”

Defense attorney Carter adds that some witnesses simply become befuddled on the stand. “People can be confused. They can find the lawyer’s questions tricky or hard to understand,” she says.

Carter points out that while she believes perjury prosecutions aren’t in themselves problematic, she hopes they “will be used sparingly” and not in cases where people were confused or didn’t understand legal jargon.

For his part, Anderson says he only intends to target people who blatantly lie. Anderson, who used to practice family law, adds that he also wants to “deter attorneys from allowing their clients to get on the stand and tell falsehoods.”

One of the unit’s first investigations centered on Jones’ former girlfriend after he was exonerated. That probe did not result in charges for suborning perjury because the crime has a three-year statute of limitations, according to Anderson.

By November, the unit had brought in three other cases. The first was against 38-year-old Merissa Leigh James, a defendant on probation who allegedly submitted fake reports to the Lake County Probation Department. She pleaded guilty to one count of perjury in October and faces up to four years in prison.

The two remaining cases were against Shannon Mick and Michael Alexander, who allegedly lied in the course of a custody battle over Mick’s son, who was 3 at the time.

According to Anderson, the boy’s father sought an emergency custody order on the grounds that Mick and her boyfriend, Alexander, engaged in domestic violence and drank alcohol. Anderson says both Mick and Alexander denied those allegations in court.

But at a hearing in the summer of 2015, the father’s attorney presented evidence from a local deputy sheriff who had gone to Mick’s residence on two occasions and found that she was drunk and had been fighting with Alexander.

Attorneys for Mick and Alexander declined to speak to the ABA Journal about their clients.

Mick subsequently said in court that she didn’t understand the legal definition of “domestic violence” when she initially testified, according to Anderson.

Flesch says he finds perjury in custody cases particularly troubling because it could result in children being left in unsafe households.

But perjury cases stemming from family court battles may be especially difficult to prove, given how high emotions run in those cases, according to Bennett Gershman, a law professor at Pace Law School. “There’s an awful lot of anger and rage and incendiary stuff there. Can you really be confident that you’re dealing with perjury?” he asks. “Perjury happens, but sometimes perjury is not clear-cut.”

He adds that proving someone intentionally lied requires a precise analysis of the language used in the questions and answers. For instance, testimony about whether there was domestic violence may be too vague to support a perjury conviction.

Prosecutors in California also must show that a defendant’s lie concerned a “material” fact to secure a perjury conviction. “Braggadocio about the length of the fish you caught isn’t perjury,” says Lake County defense attorney Barry Melton.

He adds that obviously false testimony often backfires. “Usually, tall stories don’t carry the day,” he says. “If anything, they undermine the position of the person who proffers them.”

Melton, echoing the views of other defense attorneys interviewed by the Journal, took issue with Anderson’s implication that some defense counsel endorse lies by their clients. “No defense attorney with a brain encourages anybody to lie,” he says.

Melton says most of the perjury cases he’s dealt with as a defense attorney have centered on welfare fraud—a relatively cut-and-dried matter compared to child custody disputes.

Yet another hurdle for prosecutors is that jurors may be unwilling to convict people who lie to defend themselves, as opposed to people who lie to perpetrate a fraud. “People might expect a boyfriend or girlfriend to make up a white lie on behalf of someone they love,” says Joshua Marquis, the district attorney of Clatsop County, Oregon and a board member of the National District Attorneys Association.

Marquis adds that the judicial system shouldn’t tolerate lying under oath, but he says jurors often see through falsehoods when rendering their verdicts. “As a trial lawyer who enjoys trying cases, I think juries are pretty perceptive at telling when people are lying,” he says.

Defense attorneys also are questioning whether Anderson’s new unit will evenhandedly investigate possible false statements by police officers or prosecution witnesses. “There are many instances where police officers lie on the stand, many instances where other government witnesses lie on the stand, and even have been instances where prosecutors have lied,” says Pollack from the NACDL. “But you really have to wonder if a prosecution unit within a district attorney’s office is going to pursue perceived perjury by defendants and defense witnesses.”

“There is perjury in the system—there’s a lot of lying,” adds Pace’s Gershman. “But to me, the serious perjury and the serious lies are on the side of the prosecution.”

For instance, he says, police officers are notorious for “testilying” in court—meaning they testify falsely in order to prevent evidence from being suppressed.

Harris Taback, a criminal defense lawyer in San Francisco and past president of the Criminal Trial Lawyers Association of Northern California, also questions why Anderson’s office started the initiative by prosecuting defendants and family court litigants.

Pollack adds that he fears Anderson’s program could even make it harder for defendants to present witnesses. “The playing field is already terribly uneven, and it is very difficult for the defense to get witnesses—who might have their own legal troubles, who might be afraid of prosecution—to come to court.”

He also questions whether perjury prosecutions are needed in every case in which defendants lie.

“If a defendant lies about his compliance with his probation requirements, there’s already a remedy for that: Simply charge the person with violating his probation,” Pollack says.

“I wish I could say that I had 100 percent confidence in truthfulness of every witness in court—and that includes police officers,” Pollack says. “I don’t mean to suggest that there’s not a problem. What I question is whether or not there’s really a solution here.”

This article originally appeared in the March 2017 issue of the ABA Journal with this headline: "Lying Consequences: California district attorney launches a special unit to crack down on the plague of perjury."