Law school accreditation standards get update after 6 years of effort 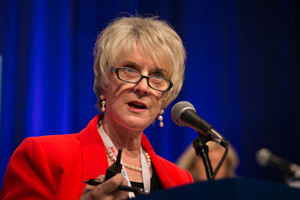 The six-year odyssey of the ABA Section of Legal Education and Admissions to the Bar to revise the standards and procedural rules for accrediting U.S. law schools has finally reached a happy ending. Well, almost. The ABA House of Delegates, voting in August at the association's annual meeting in Boston, concurred in all the revisions to the ABA Standards and Rules of Procedure for Approval of Law Schools except for one.

During its review, the legal education section's council let stand a comment to Standard 305 (PDF), which says a law school may not grant credit to a student for participation in a field placement program for which the student also receives compensation. But in a voice vote, the House referred the provision back to the section for reconsideration after representatives of the Law Student Division made some very eloquent objections.

Still, considering the delicate issues included in the section's review of the standards—only relative changes were made in the rules of procedure—the revisions breezed through the House unscathed.

Besides Standard 305, the only other subject of debate was Standard 206 (PDF), which requires law schools to "demonstrate by concrete action a commitment to diversity and inclusion by providing full opportunities for the study of law and entry into the profession by members of underrepresented groups, particularly racial and ethnic minorities."

There were some rumblings of dissatisfaction in the House over the fact that the standard was not revised to include sexual orientation and disability to the list of underrepresented groups, but the House voted to concur in the section's revisions after Mark D. Agrast of Washington, D.C., who chairs the Commission on Disability Rights, said the commission and section are planning to discuss the possibility of including those groups at a later time.

Because of the unique standing of the legal ed section's council as the entity the U.S. Department of Education recognizes as the accrediting agency for U.S. programs leading to a JD degree, the House of Delegates may not approve or reject council actions relating to the accreditation standards or procedural rules. Instead, the House may either concur with a proposed change or refer it back to the council for reconsideration. And the House may only refer a matter back to the council twice; the council has the final say.

Ruth V. McGregor, a retired Arizona Supreme Court justice who is one of the section's representatives in the House, noted that the standards will require law schools to give students more experiential training. Results of the teaching process will be measured on the basis of outcomes, such as bar passage rate, rather than inputs, such as library and other support facilities. The council also decided to retain existing Standard 405, which is widely understood to require that schools adopt some form of tenure system for their faculties. And the council approved a change that will permit a law school to fill up to 10 percent of its entering class with students who haven't taken the Law School Admission Test.

McGregor said that accrediting bodies recognized by the Department of Education must undergo comprehensive reviews every 10 years, so the next one is already on the horizon for the legal education section.

Moreover, ongoing changes in legal education mean it's unlikely the section can stand pat with the standards even with the recent revisions. The ABA's new Task Force on the Financing of Legal Education held a public hearing in Boston in an effort to begin to get a handle on why law school tuition and student debt are skyrocketing.

Chaired by former ABA President Dennis W. Archer of Detroit, the panel will examine the cost of legal education for students, student lending and how law schools are being financed. It is delving into how law schools use merit scholarships, tuition discounts and need-based financial aid.

"This task force should go hat in hand to Congress and say the legal education system is broken and it's propped up by student loans," he said.

Reform, McEntee added, should include the elimination of GradPLUS loans; reintroduction of bankruptcy protections for student loan recipients; caps on private interest rates; a requirement for schools to co-sign private loans; and a ban on consolidation of private loans with direct federal loans.

McEntee acknowledged his proposals would lead to a period where low-income individuals would have even fewer opportunities to attend law school. But eventually, he asserted, turning off the student loan "spigot" will drive down the cost and make law school more affordable for everyone.

Recognizing a dearth of data on the actual cost to deliver legal education, task force member Heather Jarvis, a student loan adviser in Wilmington, North Carolina, said she isn't convinced that student loans are a major factor in tuition increases. Jarvis observed that law school tuition costs were on the rise well before the GradPLUS program became available.

Bucky Askew, the former consultant to the legal ed section, testified about his observations and concerns.

"So much of the debate going on today is emotional and so much is based on inaccurate information," Askew said. "A lot of what's particularly on the blogs is uninformed and not based on data."

Among the cost drivers Askew identified were decreases in state support of public law schools; an overall lowering of student/faculty ratios; and the resulting increase in the number of tenure-track and adjunct faculty.

Askew didn't have an answer to what law schools should do or how they should change. But, he said, "I think many law schools are on an unsustainable path."

"In terms of access to justice, there will be a terrible problem if we don't produce lawyers who will be able to serve communities in need," he said. "I would say we're not overlawyered here, we're underlawyered."