Cheerleaders file labor and employment suits against the NFL 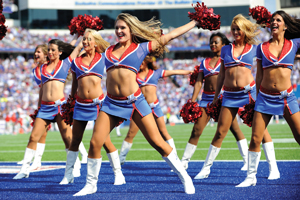 A recent spate of lawsuits by professional cheerleaders against National Football League franchises has cast an unflattering light on how the league's sideline dancers are treated and compensated.

A case filed against the Oakland Raiders in January 2014 prompted complaints against other NFL teams, alleging violations of wage and hour laws, along with accusations of poor and disrespectful working conditions. So far, more than a dozen current and former cheerleaders have filed complaints against six teams.

And it’s not just individual franchise owners who are on the defensive end: The NFL has been named in a class action suit as well.

For decades, most professional cheerleaders have been categorized as independent contractors, or even volunteers, whose presence on a cheering team should be considered an honor and a privilege. Now state courts across the country are considering whether there is enough honor to exempt these performers from minimum-wage laws—or whether the teams exercise sufficient control to be considered an employer, and thus the cheerleaders’ connections to the team require compliance with labor law standards.

Buffalo, New York, attorney Dennis Vacco represents Stephanie Mateczun, whose company contract-ed with the Buffalo Bills in 2011 to manage the team’s cheerleading squad, the Buffalo Jills. Mateczun is a defendant, along with the Bills, in a case filed by former Jills cheerleader Caitlin Ferrari for wage and hour violations. Vacco says Mateczun, a former Jill herself, was just a front—that her company was a vehicle the Bills used to manage the squad.

“The controlling entity was the Bills,” Vacco says. “The trademark belongs to the Bills; the licensing agreement gives them total control over the music, sponsors.

“Earlier this year the Bills, perhaps recognizing that the light at the end of the tunnel was a train, offered to fund $50,000 that would go toward wages. But they pulled the offer when the lawsuit was filed.”

The Bills face two separate law-suits, both claiming that the Jills cheering squad received no base compensation, and that cheerleaders were forced to pay out of pocket for uniforms and travel.

But according to Bills spokesman Scott Berchtold, the Jills are independent contractors hired and managed by third-party vendors “to provide ancillary services on game day” comparable to “parking services [and] concessionaire services.”

He calls public statements and allegations attempting to give the impression that the organization employs cheerleaders “inaccurate and misleading.” After the suits were filed, the Bills disbanded the cheerleading squad.

While the Buffalo Jills may have made nothing, other NFL cheerleaders made little more. The Cincinnati Bengals’ Ben-Gals were paid $2.85 an hour, according to a complaint filed in February 2014. And a lawsuit against the Tampa Bay Buccaneers alleges its cheerleaders were paid less than $2 an hour, and weren’t paid for required community appearances and charity events. A plaintiff identified as Krystal C. filed suit against the New York Jets last May, alleging its Flight Crew cheerleaders were paid $150 a game, but weren’t compensated for mandatory promotional appearances, practices or expenses.

Pay isn’t the only complaint. The Oakland Raiderettes claim, on top of state wage law violations, that cheerleaders had “deplorable employment conditions,” including being forced to change in public restrooms. Other cheerleaders detail “jiggle tests,” regular weigh-ins and body inspections. An annual event for the Buffalo Jills reportedly involved dunk tanks with bikini-clad cheerleaders and lap rides in golf carts with male patrons who bid the highest.

Disturbed by such allegations, California State Assemblywoman Lorena Gonzalez, D-San Diego, introduced a bill to require professional sports teams to treat their cheerleaders as employees under state law, and to provide them with the same rights and benefits as other employees. Gonzalez, a lawyer who has worked as a labor leader, was a cheer athlete at Stanford University, so the issue has particular resonance. Gonzalez says she’s gotten some pushback on her bill from legislators who wonder why it matters.

“This is a serious issue of wage theft and, quite frankly, gender equity,” she says. “I’m not going to fight over whether there should be cheerleaders at games, but if women want to do that, they should be compensated. NFL teams and their billionaire owners have used professional cheerleaders as part of the game-day experience for decades. We’re not asking for a lot; we’re asking for them to be paid minimum wage.”

Former Raiderette Lacy T. was the first to file a lawsuit to protest the low pay and inequitable conditions. As a cheerleader with the National Basketball Association’s Golden State Warriors, she was paid for every hour, every practice and all of her expenses. But things were different with the Raiders, and after months on the squad with grueling practices, mounting expenses and no paycheck, Lacy T. hired Oakland attorney Sharon Vinick, becoming the first woman to sue an NFL team for wage and hour violations.

Lacy T.’s case turned into a class action against the Raiders, which settled in September for $1.25 million in back pay and is awaiting court approval. The settlement covers 90 Raiderettes from the 2010-13 seasons. Each would receive an average of $6,000 for each season worked between 2010 and 2012. The recovery is smaller for 2013-14 because the Raiders began paying minimum wage and overtime in 2013, shortly before the suit was filed. The team also agreed to comply with state and federal labor laws and to eliminate fines for minor infractions like being slightly late for practice.

San Francisco attorney Drexel Bradshaw, who represents a separate plaintiff in a class action against the Raiders, has filed an objection to the proposed settlement, saying it “leaves about $2.7 million on the table” in terms of mandatory wages and penalties. His case alleges underpayment, failure to pay overtime and failure to reimburse for travel expenses, and it includes complaints that the Raiders required squad members to spend thousands of dollars of their own money on grooming and other items.

“Here we have one of the most profitable companies in the entire state capitalizing on and exploiting young women; then they want to avoid mandatory penalties the law demands,” Bradshaw says.

He is also suing the NFL, alleging the league is a joint employer and violated antitrust laws by acting in concert with franchises to depress cheerleader wages. Bradshaw claims that cheerleader contracts must be filed with and approved by the NFL.

The NFL has said the decision to have cheerleaders at all is the club’s choice. Six of the league’s 32 teams have no cheering squads. In an emailed statement, NFL spokesman Brian McCarthy says, “The league has no role in the selection, duties, hours or wages of team cheerleaders.”

Vinick, who is co-counsel on another cheerleader lawsuit against the Jets, doubts the NFL is liable for the actions of its franchises.

Bradshaw says he offered to drop the case against the NFL in exchange for a public statement of support congratulating the Raiders on settling their dispute with their cheer squad. But Bradshaw says the NFL “told me to pound sand.”

The case is proceeding.

This article originally appeared in the May 2015 issue of the ABA Journal with this headline: “Illegal Motion: Cheerleaders throw a flag at the NFL.”