Clearing Up Hazing: Opponents Are Pushing for Stricter Laws 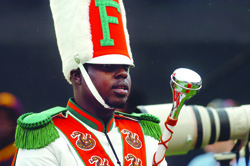 Drum major Robert Champion took part in the Florida A&M marching band’s halftime performance on Nov. 19, 2011, and died later that evening from massive injuries sustained while being subjected to a brutal hazing ritual. Photo by The Tampa Tribune/Joseph Brown III.

Back in college, Frederica Wilson earned the nickname the Haze Buster while serving as a regional director for her sorority, Alpha Kappa Alpha.

Looking at the college hazing problem today, she says “it’s almost as if the college campuses give [students] a license to kill, inadvertently, without meaning to.”

Wilson, a Democratic congresswoman representing South Florida, planned to introduce a bill—the Halting Hazing Act of 2012—last month amid an anti-hazing event scheduled in Washington, D.C. She aims to make hazing a federal offense resulting in the loss of financial aid to students involved.

“These are not pranks,” says Wilson, whose commitment to the issue was prompted in part by the November 2011 death of Robert Champion, a Florida A&M University student. “These are deadly incidents and I think it’s time for this to stop.” Thirteen students were criminally charged after Champion died from injuries incurred during a hazing ritual on a bus that included severe body blows by fellow band members at the all-black university. Eleven students are facing felony charges, while two were brought up on misdemeanors.

The Florida case is among recent incidents where the forced consumption of alcohol, physical brutality and other forms of hazing on and around college campuses have resulted in acts of cruelty and death. Other high-profile cases have garnered national attention. In June 2011, a $25 million lawsuit was filed against Sigma Alpha Epsilon on behalf of Marie Lourdes Andre, the mother of a former Cornell University student, George Desdunes, who died of alcohol poisoning during a hazing incident at the local SAE chapter. Meanwhile, Boston University began an investigation in March amid reports of hazing involving drinking with underage women, which led to the suspension of one of its sororities. And serious hazing complaints prompted New York’s Binghamton University to halt spring pledging of fraternities and sororities in April.

Wilson’s legislation, which had not been finalized or co-sponsored at press time, calls for any student convicted of a hazing crime under state law to permanently lose eligibility for financial aid. Among other measures, the bill would also restrict federal transportation funds to states that fail to enact felony criminal hazing statutes.

While such laws may seem draconian to some, Wilson is one of a group of anti-hazing advocates determined to disrupt the long-standing behavior of hazing, a practice that doesn’t appear to be letting up despite increasing knowledge of the risks and stepped-up education on college campuses.

Historically, some fraternities have won hazing cases using defenses hinging on aspects of the social host theory of liability, arguing that social hosts can’t be held responsible for injuries sustained by an individual’s voluntary drinking.

Consider Campbell v. Board of Trustees of Wabash College, a 1986 Indiana case in which a young woman attempted to recover damages for injuries she sustained as a passenger in an accident involving a car driven by a drunken fraternity member; or Alumni Association v. Sullivan, a 1990 case from Pennsylvania involving a fraternity house accidentally set ablaze by two intoxicated Bucknell University students who were served alcohol at a fraternity party. Courts sided with the defendants in both cases.

“Typically, plaintiffs counsel will sue everybody they can think of, including the national organization, the chapter, the house corporation, and a lot gets sorted out as the case progresses,” says Tim Burke, a Cincinnati-based lawyer who represents several national fraternities and sororities in hazing cases. “There is some good case law out there that says … it’s hard to blame or find the national [organization] liable for misconduct of members in a particular chapter who are violating the rules of the fraternity or sorority to begin with,” he adds.

Douglas Fierberg, a Washington, D.C.-based wrongful-death attorney representing the mother in the Cornell case, has developed a specialty in hazing litigation. Too often, he says, lawyers and courts handling hazing cases have little comparative knowledge of the law or legal precedent.

Fierberg has been turning the tables with cases such as Editha Day v. Pi Kappa Alpha, representing the family of a fraternity pledge who drowned during a hazing incident at the University of Nevada-Reno. In 2006, the court rejected the national fraternity’s motion for summary judgment to avoid liability. Subsequently, the family received substantial pretrial settlements from numerous defendants.

“Our view, and it is shared by our clients, is that ultimately the industry will not be made safer and ultimately fewer people will experience the traumatic injury and death that has come with fraternities until change is made at the national level,” Fierberg says. He favors wholesale moves such as alcohol-free fraternity housing, live-in management, and increased disclosure by fraternities and schools of incidents involving hazing.

Under the Clery Act, federal legislation signed into law in 1990, colleges and universities participating in federal financial aid programs are required to disclose information about crimes occurring on and near their campuses. The law, however, doesn’t specifically address hazing. And according to experts, hazing is not limited to physical violence and extends well beyond the purview of the Greek system.

More than half of college students involved in clubs, teams and organizations experience some form of hazing, according to researchers at the University of Maine, who released an extensive hazing study in 2008. In some instances, authority figures such as coaches and advisers were aware of the activities, which sometimes occurred within public view.

“We found hazing to be widespread, with many students not only experiencing it but also many students having knowledge about others experiencing it,” says Elizabeth Allan, a co-author of the study. “It really is something that is part of campus culture and our schools’ culture.”

Further complicating the problem are state hazing statutes, which vary dramatically in penalties and definition. While 44 states and the District of Columbia have hazing laws on their books, only eight states—including Florida—classify some forms of hazing as a felony, depending on the level of severity, according to Cindy Tesch, a University of Maine doctoral student who analyzed the laws. Definitions of hazing range from forced consumption of alcohol and drugs to whipping, branding and beating.

Fraternities and sororities, for their part, contend that they uphold strict anti-hazing policies. “Virtually every national fraternity has rules very clearly prohibiting hazing,” says Burke, the Cincinnati-based fraternity lawyer. Frank Ginocchio, general counsel and director of risk management for the Evanston, Ill.-based national organization of Sigma Alpha Epsilon, the fraternity named in the Cornell suit, points out that hazing is forbidden under fraternity guidelines.

“It’s zero tolerance and 100 percent prohibited,” says Ginocchio, who declined to discuss the Cornell case, which is ongoing. “It exists in our fraternity laws and in our … risk-management journal.”

According to published reports, disciplinary action has been taken against nearly 80 of SAE’s more than 220 chapters during the past five years. The Cornell chapter has been suspended. Some college attorneys who have worked on hazing cases question whether more onus should perhaps be placed on the individuals involved in hazing incidents, who for many purposes are considered adults under the law. “It seems to me it’s not fair to the institution to say that we should make them whole for their wrongdoing, wrongdoing that they participated in willingly at least up to a point,” says John Wiltse, deputy general counsel for the University of Nebraska, who has represented the university in several high-profile hazing cases.

Wilson, the Florida congresswoman, contends the culture of hazing is too tempting for many students to resist without stronger consequences. Her proposed legislation calls for an advisory committee within the Justice Department dedicated to hazing prevention and elimination. It would include the attorney general, the secretary of education, the secretary of health and human services, and other officials of federal agencies.

“I think that everyone is concerned about it,” she says of fellow legislators. “Most people belonged to fraternities and sororities and they’re very mindful of what happened in Florida.”