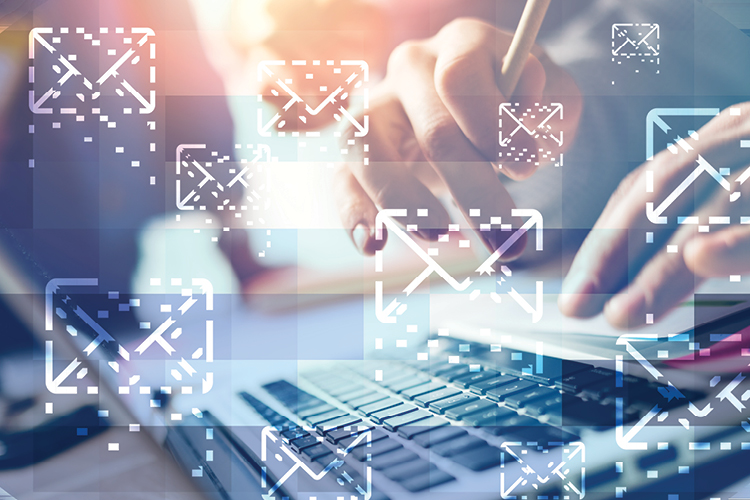 “I have to beg them to look at their email,” observes St. John, who oversees the day-to-day operations of a law firm with over 375 attorneys in more than a dozen offices.

St. John sees similarities between the high schoolers in his home and the young lawyers at his firm.

“My sense is that the younger generation of lawyers use email less as a communication vehicle, and [they] have grown up in a world where their communication is done through social media apps,” St. John says.

All that comes with a big caveat, however. For years, tech and business experts have predicted the death of email. But it has never come to pass. And St. John isn’t about to make any bold statements about its demise, either. He says email is still the primary form of communication at his firm, especially with clients, and “for the foreseeable future is here to stay.”

All the same, with pandemic-era workplace changes and rising email fatigue among his attorneys, St. John has tried to foster personal connections that aren’t always possible with email, which is often unwieldy and impersonal. Anticipating a return to the office, the firm unveiled in January an app called Seal2Go that’s exclusive to his firm but has features familiar to users of other social media apps, including “likes” and marketing and educational resources.

“We’re getting people to be more engaged in thinking about reading about our wins, our investment in the community and our clients, as opposed to sending email after email. After a bit of time, you get all those emails, and you start to tune out,” St. John says, noting lawyers like using the app as a “one-stop shop for information.”

Of course, law firms’ desire to offer other forms of digital communication is not limited to St. John’s firm or its app. There are many tech solutions for lawyers and firms who want other options, including Slack, billed as an email killer; Microsoft Teams and Zoom, which soared in popularity during the pandemic; and practice management software such as MyCase and Clio.

On the other hand, when it comes to embracing new tech, the legal profession has been branded, perhaps unfairly, as slow on the uptake.

“Despite the fact that people have predicted the death of email for some time, we’re not seeing it in the legal industry,” Nelson says.

But Frank Gillman, a legal tech expert and principal of the professional services firm consultancy Vertex Advisors, contends the future of email looks bleak, even if it never completely disappears from law firms.

“Email is the next facsimile,” Gillman says. “I believe we’re at the tipping point where email starts to fade out over the next five to 10 years.”

From a cybersecurity standpoint, changes in workplace culture mean more and more people are working remotely or in a hybrid model. Those shifts have exposed email’s vulnerabilities, “increasing the risk of phishing attacks and impersonation as more and more sensitive documents and links are transferred by remote workers,” Gillman says.

Other encrypted forms of digital communication, such as chat rooms or practice management software, are more secure, he says, and discussion threads are easier than email to parse and read.

“If you’re not moving all that information back and forth and having copies at the client site, at your site and everywhere else, it certainly lends itself to stronger confidentiality and information governance,” Gillman says.

Gillman believes three things will drive law firms to other platforms: client demand, the next generation of executive leadership attuned to newer technologies, and a desire to attract and retain new talent with the latest digital platforms.

And it could be the next crop of Gen Z lawyers who determine email’s fate. A 2022 Deloitte study found that mental health in the workplace is a consistent challenge for Gen Zers and millennials, with 46% of Gen Zers and 45% of millennials saying they “felt burned out due to the intensity and demands of their work environments.” (See also “Fighting Burnout” on page 13.)

Furthermore, a 2020 study by the consulting group Creative Strategies found people ages 30 and older were more likely to say they use email over other platforms to collaborate in the workplace. But workers under 30 were more likely to use Google Docs, iMessage or Zoom than email.

Ben Bajarin, CEO and principal analyst at Creative Strategies, says those findings stayed consistent when the company did a similar study in 2022. He says younger people are influenced by consumer products they used in college, including Google Docs or text messaging. That influence has bled into workplaces. And he believes the collision of a younger generation of workers with a hybrid work environment is accelerating the changes the company’s survey revealed.

“When it comes to younger workers, every organization wants to get the next crop of talent. And to do that, you have to be more flexible. You have to be willing to support them in the ways that they want to work, or they’re not going to work there,” Bajarin says.

But email isn’t just the scourge of younger generations. The feeling of existential dread that accompanies an inbox full of unread messages is familiar to anyone with an email account, even if the format still has its fans. Nelson says tech tips on how to keep email boxes under control are still popular among lawyers, and “just anecdotally, they complain nonstop about emails, and now texts. Because texts have been forced on them by their clients.”

Mark Pike, who is product counsel at Slack, says some lawyers and law firms have been resistant to adopting the software. But email is an ineffective and outdated way for legal teams to work and is “siloed, disorganized and often overwhelming,” he argues.

“I think they find as soon as they start using the software, their clients are happier,” Pike says. “You can securely collaborate together in Slack as easily and productively as you can internally.”

Besides mainstream apps like Slack and Teams, there are a whole host of apps aimed at lawyers that promise to streamline communication on a secure cloud-based platform. It will come as no surprise that executives at some of these legal tech companies believe their platforms could knock email off its perch.

Jim McGinnis, who is president at AffiniPay, the parent of legal tech companies LawPay and MyCase, says the goal of MyCase is to transition law firms away from a reliance on email and toward MyCase, an encrypted platform that allow firms to protect client confidentiality, organize and track digital files, and bill for their time.

“Change is always hard,” McGinnis says. “When they get a single platform, it’s just faster and easier for them to communicate with their clients in more secure, encrypted ways than it is to drop an email.”

Nelson agrees that cloud-based solutions and client portals are the future. Patients in the health care sector and clients in the financial sector are used to using online portals to chat with their doctors or advisers or access their data, Nelson says. She expects the legal industry to follow suit.

Adopting the tech is a win for lawyers who are often inundated with emails and texts from clients, Nelson says.

“If it’s 3 o’clock in the morning, [clients] don’t have to bother you. They can go to their client portal and review something, or pay their bill,” she says.

Ultimately, though, email’s sheer pervasiveness means that it’s likely to endure, even if lawyers only use it for certain things.

“The reality is that the world is not in a ubiquitous Slack channel,” Sensei Enterprises vice president John Simek says. “But we can all communicate with email.”

Bajarin notes that while other platforms are better for real-time communication, there is still a place for email for less-urgent tasks like sending training policies and procedures and for preserving executive communications. He says different platforms will continue to exist side by side, depending on the task. And despite email’s bad rap, he says every platform has its downsides.

“I think you could also argue that there’s Slack-and-Teams-chat fatigue,” says Bajarin, adding that workers have complained that “those channels become distracting.”

This story was originally published in the December 2022-January 2023 issue of the ABA Journal under the headline: “Empty Inbox? Could hybrid work and generational shifts finally kill email?”