Courts are giving reduced terms to many child-porn defendants 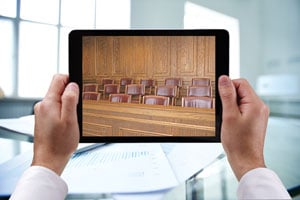 Some judges are opting, despite appellate scoldings, to depart from the standard sentencing schemes applied to those convicted of downloading child pornography. Illustration by Monica Burciaga/iStockphoto.

U.S. District Judge James S. Gwin of the Northern District of Ohio polled a jury in February about what jurors thought a suitable sentence would be for Ryan Collins, a child pornography defendant who was found guilty of having 19 videos and 93 still images on his computer.

Responding to the poll results, Gwin was quoted as saying that jurors showed “how off the mark the federal sentencing guidelines are,” according to Cleveland.com. In March, the Northern District’s U.S. attorney’s office filed a notice of appeal on Collins’ sentence. The office declined to comment on the case.

The Collins case was among several recent ones in which district courts have granted lenient sentences to defendants convicted of child pornography possession.

Collins and other defendants downloaded the images through a peer-to-peer file-sharing program, through which search results are pulled from other users’ hard drives that are running the software and connected to the Internet. P2P differs from the standard client-server model, in which the user requests and usually buys the image from a central server.

By contrast, P2P users often don’t realize they are sharing the images because the software automatically downloads the images from other users’ hard drives. Many defendants claim they didn’t know the program shared those files, defense lawyers say. It’s the differ-ence between splashing oneself with water and plunging into the pool.

Tyack’s client is Richard Bistline, a Mount Vernon man who pleaded guilty to knowingly possessing 305 images and 56 videos of child pornography on his computer. A 67-year-old stroke victim with hearing loss who was responsible for his wife’s care, Bistline admitted to federal agents that he downloaded the images through a P2P program. According to court records, many showed girls between the ages of 8 and 10 being raped by adult men.

The federal probation office rec-ommended a 24-month sentence. In 2010 U.S. District Judge James L. Graham, who sits in the Southern District of Ohio, sentenced Bistline to one day in federal custody and 10 years of supervised release.

The government appealed, and in 2012 the 6th U.S. Circuit Court of Appeals at Cincinnati vacated the sentence, calling it substantively unreasonable. In 2013 Graham resentenced Bistline, who had no prior convictions, to one day in federal custody, three years of electronically monitored house arrest and 10 years of supervised release.

“If I have to send somebody like Mr. Bistline to prison, I’m sorry, someone else will have to do it. I’m not going to do it,” Graham said, according to a subsequent 6th Circuit opinion published in 2013. The court again vacated the sentence and remanded the case for reassignment.

Tyack plans to file a cert petition with the U.S. Supreme Court. It will be his third; the other petitions were denied.

Deborah Solove, an assistant U.S. attorney handling the case, says her office will not comment on the matter.

According to one study cited in a 2012 U.S. Sentencing Commission report, 85.3 percent of child pornography distribution convictions in the first quarter of fiscal year 2012 involved P2P programs. Of offenders who used the programs, 55.6 percent distributed images solely with an open P2P program.

The study also found that the rate of known sexual recidivism for nonproduction offenders was 7.4 percent. The agency suggested that Congress revise the nonproduction child pornography sentencing scheme, because crimes stemming from downloads involve less culpability.

If prosecutors think that a child pornography defendant’s mental health contributed to the crime, and that the individual is sincere about rehabilitation and is not a child predator, they will agree to diminished incarceration plea agreements, says Raymond Cassar, a Farmington Hills, Michigan, defense lawyer.

“The government doesn’t really believe that treatment can help most of these people,” Cassar says, adding that courts “are starting to get” that sense, too.

One such case involved Nicholas Dubin, who has Asperger’s syndrome. According to a government sentencing memo, the FBI logged on to a P2P network in 2010 and identified 12 files on Dubin’s computer. More than half contained child pornography. The government obtained a search warrant for his home and found “several hundred to 1,000 images” of child pornography on his computer. Electronic storage devices were also seized from Dubin’s home, and a forensic examination of the devices found child pornography in digital images and movie files.

Dubin told authorities that he’d searched for pornographic images of boys who were between 10 and 14 years old, according to the government’s sentencing memo.

At the time of his arrest Dubin was the dean of students at a high school. In 2013, he pleaded guilty to one count of child pornography possession, and his sentencing range under the guidelines was between 97 and 120 months.

The government, however, agreed to sentence Dubin to one day in federal custody, with credit for time served, and five years of supervised release. A 2013 sentencing memo submitted by the Eastern District of Michigan’s U.S. attorney’s office notes that people with autism spectrum disorders often have limited intimate relationships. The document also asserts that Dubin, who had no prior criminal record, was remorseful about his actions and had focused his therapy to understand why his crime was harmful.

“A sentence of one day time served does not, in any way, adequately reflect the seriousness associated with the possession of child pornography,” the government wrote. “However, in this exceptional case, a noncustodial sentence will effectively promote respect for the law and provide just punishment.”

To some, child pornography offenders may not seem as dangerous anymore, because their profile has changed, says Melissa Hamilton. A visiting criminal law scholar at the University of Houston Law Center, her research focuses on violence, sex crimes and sentencing.

“Going to a physical location and buying child pornography off the shelf or sending away money to get it by mail,” she says, involves more culpability than searching for it online.

The sentencing guidelines, she adds, were written before the uptick in prosecutions involving child pornography from P2P programs, and it’s unlikely that they’ll change in the near future.

“It’s a political hot potato to say that people who view child pornography aren’t that dangerous,” Hamilton says. “I have noticed some instances where very senior judges, who are reflecting [on the defendants they sentence] sometimes write long opinions saying that the child pornography downloaders don’t look as scary and risky, in terms of other violent offenders before them.”

But the lower courts’ diminished sentences are butting up against circuit court opinions. “Any probation sentence for what seems like a relatively serious crime—and most appellate judges think that child pornography is a serious crime—gets their appellate hackles up,” says Douglas Berman, a law professor at Ohio State University who writes the blog Sentencing Law & Policy.

“Upon review, an appeals court may worry the sentencing judge is going with his own views on the seriousness of child pornography, without enough regard to the sentencing guidelines and Congress’ intentions,” Berman says.

Berman is not sure why that’s so. It may be that after the first judge gave a sentence with no incarceration time, others were emboldened to follow suit, he says.

This article originally appeared in the August 2015 issue of the ABA Journal with this headline: “Minors Sentence: Courts are giving reduced terms to many child-porn defendants.”