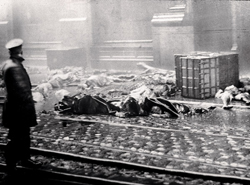 On March 25, 1911, a fire erupted near closing time at the Triangle Waist garment factory in Lower Manhattan. Within 20 minutes the blaze had consumed much of the plant, which occupied the top three stories of the 10-story Asch Building, and 146 workers were dead or critically injured. Many of the victims, predominantly young immigrant women, leaped to a harrowing death onto the sidewalks below, while others were roasted alive inside, their escape denied in part by a locked ninth-floor door.

Some 350,000 later turned out for a funeral march that was described as one of the “most impressive spectacles of sorrow New York has ever known.” Along with the sorrow came outrage—and a demand for accountability, which led to the indictment of the factory’s owners, Max Blanck and Isaac Harris, on manslaughter charges.

The trial was partly shaped by famed defense attorney Max Steuer, who shifted blame to the victims, arguing that their panicked attempts to flee had sealed their fate. Judge Thomas Crain ruled out testimony entailing “any general description of outside conditions,” thus preventing jurors from hearing the most evocative, grisly details. Moreover, Crain instructed the jurors that unless they were certain the owners were aware the door was locked at the time of the fire, “it will be your duty to acquit the defendants.” After four ballots, the owners were acquitted and secretly escorted away so as to avoid the angry crowd outside.