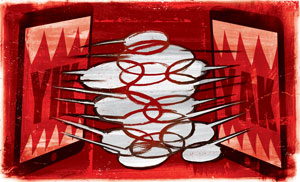 Last year, students at the University of Mary Washington in Fredericksburg, Virginia, used Yik Yak, an anonymous social media app, to spew hatred and violence against their classmates.

Posters lobbed more than 700 comments at members of Feminists United, a student-run organization that had spoken out against bringing fraternities onto campus and against the school’s rugby club for a vulgar chant.

The anonymous posters used crude, demeaning and sexually explicit language in reference to the feminist group and its individual members. One comment included tying “these feminists to the radiator” and raping them, according to Feminists United members. The targeted women asked their school administration to get control of the situation, but say they failed to get an adequate response.

Debra Katz, a Washington, D.C.-based civil rights attorney for Feminists United, argues that universities have a duty to investigate cyberthreats, harassment and bullying against students.

“Students across the country are being targeted online based on gender and race,” Katz says. “When people are allowed to say horrible, sexist and racist things, and do it with impunity, it creates a classically hostile environment.”

In October a coalition of feminist and civil rights advocacy groups asked the U.S. Department of Education’s Office for Civil Rights to remind universities and colleges of their legal obligations under Title IX of the Education Amendments of 1972 and Title VI of the Civil Rights Act of 1964. The groups asked the OCR to issue guidance to academic institutions on their “legal obligations to prevent and remedy all forms of prohibited harassment, including harassment through anonymous social media applications.”

The groups also urged the office to provide “concrete examples of what kinds of actions might be appropriate.”

But Michael Cooney, a partner at Nixon Peabody in Washington, D.C., says universities can’t prevent students from anonymously posting hateful speech. Nor do they have an obligation to monitor third-party platforms.

A person who posts on Yik Yak is equivalent to “someone putting graffiti on a wall,” says Cooney. “If the wall is on your campus, you can wipe it clean. But by analogy, the wall here isn’t even located on campus. It’s someone else’s wall.”

Yik Yak is one of a growing number of apps that allow smartphone users to post messages anonymously. It is considered particularly compatible with campus life as it allows posters to communicate in real time to other Yik Yak users within a relatively small geographic location.

Generally, Yik Yak users post messages about school complaints, drinking and campus gossip. But there have been cases across the country of the app becoming a forum for racist, misogynistic and homophobic comments, according to civil rights and feminist groups.

A handful of universities have blocked the app on their Wi-Fi networks. Some students are calling for blocking Yik Yak more completely by setting up a “geofence” around the ZIP codes of a specific campus. There has also been increasing pressure on the developers of social networking platforms to consider the apps’ potential for harassment and abuse. Yik Yak did not return a request for comment.

Eugene Volokh, who teaches free speech law at UCLA, says comments that specifically target individuals or institutions with violence could be considered criminal in nature. He says universities may have some ability to help identify people who make legally punishable threats, with the assistance of police departments.

However, Volokh emphasizes that colleges and universities do not have a duty or even an ability to control merely hurtful speech on social media. “You are entitled to say derogatory things,” he says. “This is constitutionally protected speech. Even advocacy of violence in the abstract is protected.”

But Katz argues that race- or gender-based harassment has no place on campus. Last May UMW feminists filed a Title IX complaint with the Office of Civil Rights. The complaint alleges that the university administration subjected students to a hostile environment by failing to properly respond to sexual harassment on Yik Yak. The OCR has since launched an investigation into the university.

University spokeswoman Marty Morrison says the school does not feel it is appropriate to comment at this time, but a previously released statement said UMW welcomed the investigation and guidance.

This article originally appeared in the April 2016 issue of the ABA Journal with this headline: “Yicky Yak: Do anonymous social media apps create Title IX violations?”