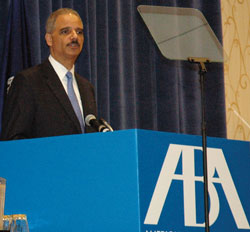 Between them the programs will make up to $2.4 million in federal funding available to research projects that study the barriers preventing criminal defendants from receiving effective legal assistance, and that support direct efforts to break down those barriers.

“These initiatives represent an unprecedented level of support—from this Justice Department and from the administration as a whole—for reforming America’s legal system and improving its ability to serve those who find quality representation to be out of reach,” said Holder in a luncheon speech at the Seventh Annual Summit on Indigent Defense Improvement presented by the ABA Standing Committee on Legal Aid and Indigent Defendants. The summit was held in New Orleans during the ABA Midyear Meeting in February.

Holder said the National Institute of Justice, a part of the Office of Justice Programs, will begin soliciting applications within the next few weeks for grants to support research on fundamental issues of access to legal services at the state and local levels, including the need for quality representation. He said the institute will commit up to $1 million to support these grants.

Later this spring, Holder said, the Justice Department’s Bureau of Justice Assistance will solicit applications from state and local jurisdictions for grants to support on-the-ground efforts to help ensure that defendants have access to counsel at the earliest stages of criminal proceedings; provide support for members of the private bar who are representing indigent defendants; reduce caseloads; and support oversight of public defender and assigned counsel systems. Up to $1.4 million will be dedicated to this program.

The grants come at a time of crisis for indigent criminal-defense services, Holder said. In the face of economic pressures on government budgets, “the obstacles we face have been brought into stark focus,” he said. “Across the country, public defender offices and other indigent defense providers are underfunded and understaffed. Too often when legal representation is available to the poor, it’s rendered less effective by insufficient resources, overwhelming caseloads and inadequate oversight.”

Holder praised the efforts of the ABA (PDF) and other groups, including the National Association of Criminal Defense Lawyers, to improve indigent services.

“Fortunately,” said Holder, “the American Bar Association has responded to this crisis not with despair but with dedication, optimism and a plan of action.”