Indiana law requires anyone “who has reason to believe” that a child is a victim of abuse or neglect to “immediately” make a report to the state department of child services or a local law enforcement agency. Failure to make such a report constitutes a Class B misdemeanor. Unlike similar laws in some other states, the Indiana statute does not specifically exempt lawyers from the reporting requirement.

Nevertheless, the Legal Ethics Committee of the Indiana State Bar Association has concluded that the obligation of lawyers to report cases of child abuse or neglect is not absolute. Instead, the committee says in its Opinion No. 2 of 2015 (PDF), a lawyer’s duty to report is limited by the lawyer’s obligation to protect client confidentiality. Rule 1.6 of the Indiana Rules of Professional Conduct states that a lawyer “shall not reveal information relating to the representation of a client unless the client gives informed consent” or one of a limited number of exceptions apply.

(The Indiana rule on confidentiality closely tracks Rule 1.6 of the ABA Model Rules of Professional Conduct. The Model Rules are the basis for binding ethics rules in every state, although California follows a different format.)

“This issue presents a doubly difficult situation,” says Charles Geyh, who teaches professional responsibility at Indiana University’s Maurer School of Law in Bloomington. “First, it pits the public and their elected representatives against the bar by putting the bar in the awkward position of defending the sanctity of lawyer-client confidences in a context where there is likely to be little sympathy for preserving the confidences of child abusers and where the virtue of universal reporting seems obvious. Second, it pits the legislature, which regulates the general public and has imposed a universal duty to report, against the judiciary, which regulates the bar and has imposed significant duties on lawyers not to report.”

THE RULES ARE THE RULES

The opinion acknowledges the “conflict between the lawyer’s ethical duty to keep silent and the apparent statutory duty to speak.” But given the Indiana Supreme Court’s “authority over the legal profession, its Rules of Professional Conduct control over conflicting legislation.” To conclude otherwise, says the committee, would violate separation-of-powers provisions set forth in the state constitution.

Moreover, the opinion states, “requiring lawyers to protect their client’s confidences likewise protects the attorney-client relationship—at a time when it is most needed.” The committee notes that Comment 2 to Rule 1.6 describes confidentiality as “a fundamental principle in the client-lawyer relationship” that encourages a client “to communicate fully and frankly with the lawyer even as to embarrassing or legally damaging subject matter. The lawyer needs this information to represent the client effectively and, if necessary, to advise the client to refrain from wrongful conduct.” 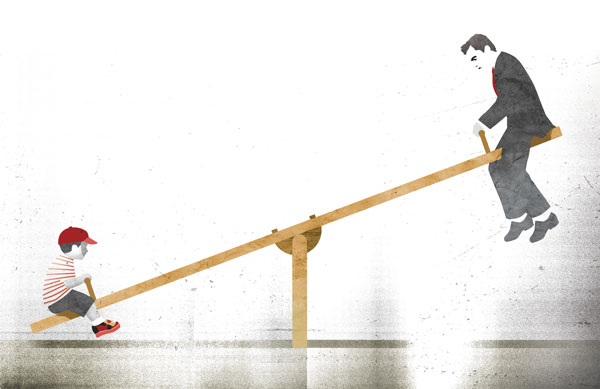 But, “if attorneys are mandatory reporters, this ‘fundamental principle’ is undermined regardless of when the lawyer discloses the potential for reporting,” the opinion states.

The opinion also cites Comment 6 to Rule 1.6, which states that the rule “recognizes the overriding value of life and physical integrity and permits disclosure reasonably necessary to prevent reasonably certain death or substantial bodily harm.” This approach allows an attorney “to make a commonsense, reasonable determination of whether the children will be subject to ‘reasonably certain death or substantial bodily harm,’ and only disclose to prevent that harm.”

Experts disagree over whether the Indiana bar’s ethics opinion strikes an appropriate balance between the mandatory reporting statute and the duty of confidentiality under the professional conduct rules.

“The ethics opinion strikes an appropriate balance, given the competing interests at stake,” Geyh says. “The opinion concludes that the statutory duty to report all child abuse applies to lawyers in those instances where supreme court-imposed ethics rules permit, but do not otherwise require, a lawyer to disclose—namely, where reasonably certain death or substantial bodily harm are at issue. The corollary conclusion, however, is that the statutory duty to report does not apply in instances where lawyer ethics rules flatly prohibit disclosure—namely, where lesser forms of abuse are at issue.”

Peter A. Joy, who teaches ethics at Washington University School of Law in St. Louis, comes to a different conclusion. “The opinion does not reach the correct result under either the plain language of the Indiana reporting law or the Indiana ethics rule on client confidentiality,” he says. “The committee surely thinks it has reached the right result, but it would be better to change the Indiana reporting statute and the confidentiality ethics rule than to strike some compromise that is not supported by the plain language of either the law or the ethics rule.”

The statute, Joy says, “requires anyone, including a lawyer, who has reason to believe that a child is a victim of abuse or neglect to make an immediate report to either the department of child services or a local law enforcement authority. Unlike reporting laws in many other states, Indiana does not exclude lawyers from mandatory reporting of suspected child abuse. The ethics opinion, though, states that a lawyer only has to follow the law and report child abuse or neglect necessary ‘to prevent reasonably certain death or substantial bodily harm,’ which is the standard in Indiana’s confidentiality rule for permissive reporting of a client’s confidence.”

Joy says this conflict between the statute and the ethics rules creates potential risks for lawyers. “Any lawyer in Indiana who relies on the ethics opinion and does not report suspected child abuse that the lawyer thinks is not threatening reasonably certain death or substantial bodily harm is running two risks if the nonreporting is discovered,” he says. “The first risk is that the lawyer has just violated the explicit language in the statute and would face criminal charges if a prosecutor so decided to prosecute. The ethics opinion does not and could not bar such a prosecution, and the opinion even states at the start that it ‘does not have the force of law.’ The second risk is that the lawyer could also face professional discipline if bar disciplinary counsel and the Indiana Supreme Court disagree with the ethics opinion. In my opinion, any lawyer in Indiana who relies on this ethics opinion would be going out on a limb if the lawyer does not report suspected child abuse or neglect.”

Geyh agrees that the Indiana opinion can create a difficult dilemma for lawyers. “The opinion does not make life easy for the lawyers involved,” he says. “A lot rides on the lawyer’s assessment of whether a given episode of abuse implicates ‘substantial’ bodily harm, and I don’t envy them that judgment call. But there is no easy resolution here—every option entails promoting one core value at the expense of another. This seems as reasonable a resolution as any.”

This article originally appeared in the January 2016 issue of the ABA Journal with this headline: “Conflicted Over Confidentiality: Indiana ethics opinion says lawyers are not always obligated to report cases of child abuse involving clients.”