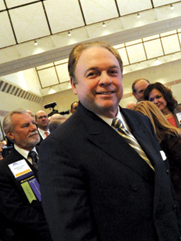 That dark cloud hovering over the ABA Midyear Meeting had an ominous cause: the ill winds sweeping through the world economy and, increasingly, the country’s legal profession and justice system.

ABA officials and other meeting participants cited the concern in a num­­ber of ways during the five-day gathering in Boston that ended Feb. 16. The econ­omy was mentioned as a key cause of the continuing housing foreclosure crisis, as a factor in the inadequate salary adjustments for federal judges, as a pressure on state courts to reduce services, and as a reason for the as­sociation to endorse increased legal ser­vices to economically distressed families and career assistance for lawyers losing jobs in growing numbers.

Stephen N. Zack of Miami, the new ABA president-elect nominee, told the House of Delegates in his introduction that it is crucial that the legal profession respond effectively to economic concerns. “In times of trouble, including economic crisis, history has taught that we turn to our lawyers and our judges—not to our generals and our guns,” Zack said.

The economy also was a factor in the house’s most extended debate, on competing proposals to amend the ABA Model Rules of Profes­sional Conduct to allow “screening” of lawyers who change firms.

In one of the recommendations, the Standing Committee on Ethics and Professional Responsibility proposed that Model Rule 1.10 be amended to allow a firm to buffer, or “screen,” the incoming lawyer from any participa­tion in a case that might create conflicts with clients at his or her former firm. With such screening, one lawyer’s conflict of interest would not require the entire firm to be disqualified from a case, as it would be under Model Rule 1.10 in its existing form.

The recommendation was similar to proposals rejected by delegates in 2002 and tabled in 2008.

The third time proved to be the charm. The House approved the ethics committee’s proposed revisions by a vote of 226 to 191. Pro­ponents of the final measure said it would protect the interests of cli­ents while making it easier for lawyers to move to jobs at new firms, which is becoming more common in the uncertain economy. Similar rules already are in effect in 24 states, they said.

“There’s no compromise here in any core values,” said Presi­dent-elect Carolyn B. Lamm of Wash­ington, D.C., in support of the ethics committee proposal. “This rule is appropriate now and for the future.”

But opponents maintained that it puts the economic interests of lawyers ahead of the confidentiality interests of clients.

“Don’t make the reasoning for this change that we’re in tough economic times,” said JoAnne A. Epps, the dean of Temple University law school and a delegate representing the Litigation Section, “because what that tells my students is that when things get tough, lawyers look out for themselves.”