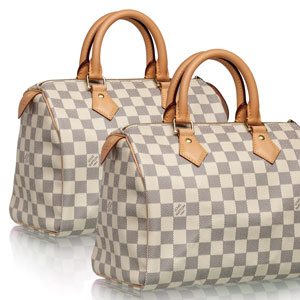 Louis Vuitton may become a little less fabulous if a recent ruling of the European Union General Court remains standing.

On April 21, the court refused to overturn the cancellation of two community trademarks (European Union registrations) that the Paris-based luxury fashion label held on a checkerboard pattern called Damier.

Created in 1888 under house founder Louis Vuitton and son Georges to adorn the canvas cover-ing trunks, cases, bags and other accessories, the pattern became “one of the biggest successes of Louis Vuitton” upon its relaunch in 1998, according to the brand’s website. But it wasn’t enough to convince the court that the pattern possessed the distinctiveness necessary for trademark protection.

Louis Vuitton Malletier v. Office for Harmonisation in the Internal Market (Trade Marks and Designs) is actually two nearly identical rulings on a Damier check trademark in brown and beige and another in light and dark grey, both including a weft and warp pattern. The validity of the trademarks was brought to OHIM’s attention in 2009 by a German chain store called Nanu-Nana that sells a wide variety of affordable, whimsical gifts and home decor items such as Cookie Monster pillows (with an attached cookie-shaped coin purse) and decorative wicker basket sets.

At the time, Nanu-Nana was involved in a trademark dispute with Vuitton in a German court over a checkerboard pattern the store had used on a wooden wine box. The cancellation request arose as a “counterstrike” in the company’s defense strategy in that case, says Nanu-Nana lawyer Thomas W. Boddien of the Berlin office of Boehmert & Boehmert. Boddien believes the rulings “might have general significance for the entire retail industry,” especially in future trademark cases involving surface patterns.

It is, however, too early to declare checkmate. Vuitton still can appeal to the European Court of Justice, says Vuitton lawyer Pier Luigi Roncaglia of the Florence office of Studio Legale SIB, although he doesn’t yet know whether his client will exercise that option. Regardless, he stresses that the Damier pattern is still protected in individual EU countries, and any assumption that Vuitton has lost rights to the pattern is incorrect.

Indeed, it’s a common strategy for luxury brands to hold both community-registered trademarks and national trademarks, says London lawyer Annabelle Gauberti, founding partner of Crefovi, who practices fashion and luxury goods law in England, Wales and France. Additionally, a variety of legal tools exist to defend marks across the EU, such as the argument of unfair competition in France, Italy and other Mediterranean countries and the tort of “passing off” in England and Wales. But Gauberti says Vuitton should be concerned. “I think there are a lot of competitors that may want to invalidate these national trademarks, too,” she says, and they could try to challenge Vuitton’s national trademarks using the EU court’s determinations as evidence. Which is why she predicts Vuitton won’t allow itself to be boxed in by these rulings. “They will not want precedents on any level,” she says.

Unfortunately, Damier-loving fashionistas already may have checked out. “Logo-driven inventory is less desirable right now, and where Louis Vuitton was once the most heralded large luxury brand, it’s not so interesting to the affluent client right now,” says Cameron Silver, an internationally renowned fashion historian, retailer and fashion director of the H by Halston and H Halston brands. “Maybe it’s a blessing in disguise.”

This article originally appeared in the September 2015 issue of the ABA Journal with this headline: “Boxed In? EU court invalidates luxury trademark on checkerboard pattern.”