Costly municipal fines and fees spark a movement for reform 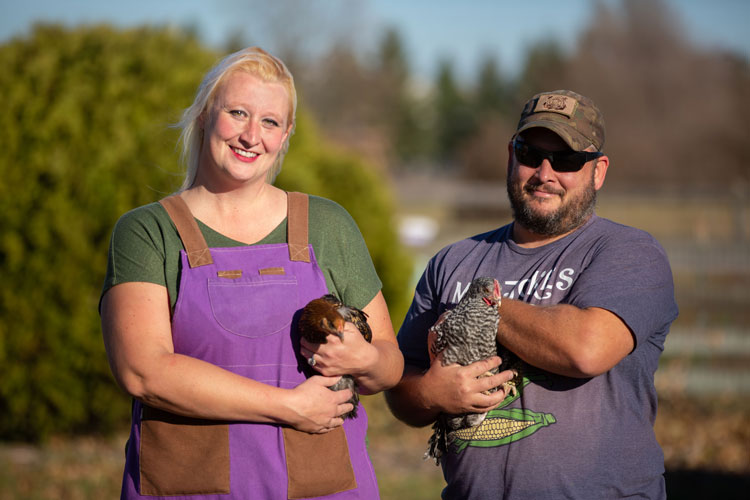 Zach Mallory and his wife, Erica Brewer, say they are being unjustly targeted for zoning violations. Photo courtesy of Institute for Justice.

Zach Mallory was inside his home in rural Wisconsin when motion sensors alerted him to uninvited guests. Mallory glanced at a security monitor through an app on his phone. The screen framed four sheriff’s deputies, a building inspector and a town planner. Armed with a warrant, they were there to investigate potential violations of zoning rules.

“I felt it was excessive,” Mallory says, recalling the June 2020 event. “They hadn’t proven there were any violations. They simply wanted to inspect the property.”

He owns Mallory Meadows, a 3.8-acre farm in Eagle, where he and his wife, Erica Brewer, grow produce and raise chickens, ducks and Icelandic sheep. Mallory and Brewer, a full-time nurse, dreamed the farm would lead to early retirement. In May 2020, Eagle’s town planner, Tim Schwecke, warned them the town would investigate a complaint that the couple was operating a business on a residential property. Later, town officials threatened them with $20,000 in fines if they did not cut overgrown grass, remove an unpermitted hot tub, beehives and livestock or apply for the necessary permits.

In a lawsuit filed in November, Brewer and Mallory claim that under the First Amendment, the town is retaliating against them for voicing support for a neighboring horse farm that also ran afoul of the town’s enforcement policies. When the couple bought the property in 2016, it was zoned as “agricultural”; the town rezoned their land as “rural residential” in 2017, but they are allowed “limited” agricultural use, according to their court filing.

Brewer and Mallory say the town’s actions have thrown their plans into chaos.

“Economically, this has had a huge impact,” Brewer said in December. “I’m struggling to figure out how am I going to get ahead of the winter weather to have crops for next year.”

The Institute for Justice, an Arlington, Virginia-based libertarian public interest group, represents Brewer and Mallory, and another Eagle couple, Annalyse and Joe Victor. 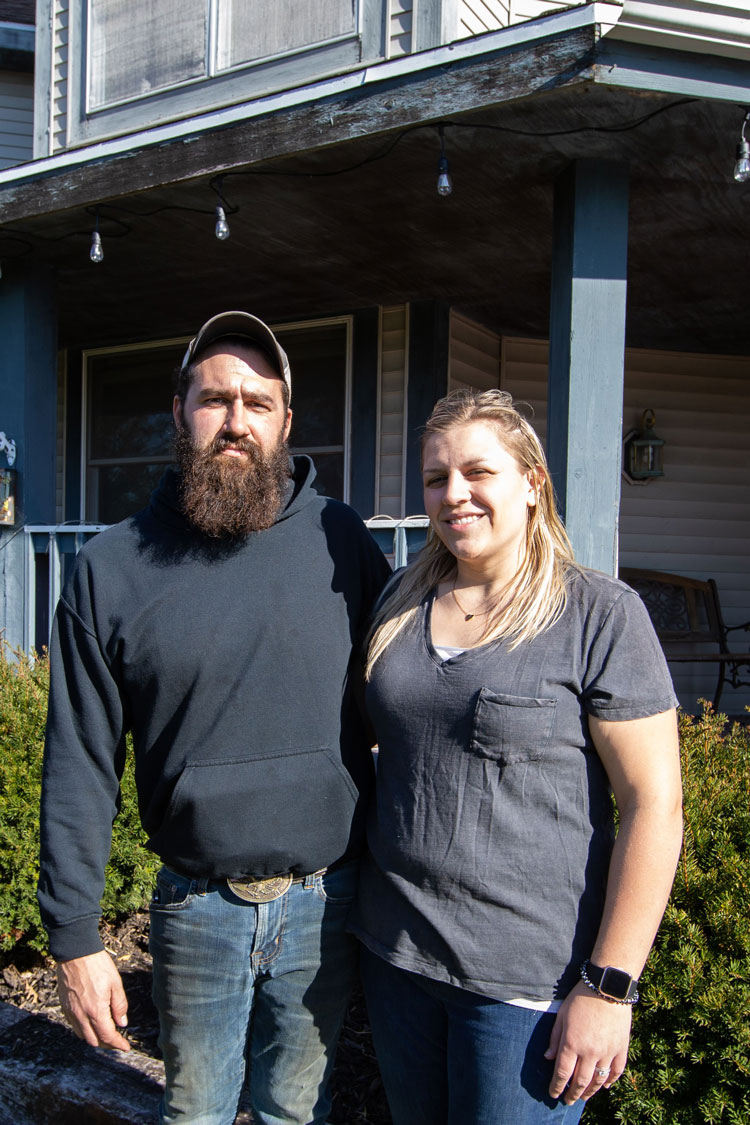 Annalyse and Joe Victor. Photo courtesy of Institute for Justice.

The Victors say they were fined for keeping semitrucks on their property. A judge entered a default judgment against them for $87,900 in September 2016, and town attorneys recommended jail time. Though the judge struck out the jail provision, Joe Victor says the judgment makes it “impossible for us to sell our home and leave.” In January, the couple filed a motion to vacate the judgment.

Regardless of whether the code violations are valid, Institute for Justice attorney Kirby Thomas West argues Eagle is levying and threatening fines that are disproportionate to the offenses, and they reflect what the group has seen in California, Georgia, Florida, Missouri and other states. Across the country, Americans are being hit with hefty fines and fees for petty violations, advocates for reform say, igniting a movement pressing for change.

“Code enforcement exists to promote public health and safety, but the way we’re seeing it happen across the country right now is to make money,” West says.

In January, Eagle—a town with a population of 3,600 and a $1.8 million 2021 fiscal year budget—asked a federal judge to throw out Mallory and Brewer’s case, arguing the couple is trying to use the court “as a zoning board of appeals” without exhausting all of the state procedures and remedies available to them. The town says the couple declined a voluntary inspection to investigate the merits of the anonymous complaint, and it is only ensuring compliance. Municipal Law & Litigation Group of Waukesha represents the town. The firm’s attorney Remzy Bitar says the couple’s lawsuit is without merit.

When local governments do rely too heavily on fines and fees, the effect on low- and middle-income Americans can be devastating, Lisa Foster of the Fines and Fees Justice Center argues.

“As long as there are laws in place, they need to be enforced, and people need to be held accountable if they violate those laws,” Foster says. “But how you enforce the law has to be fair.”

Charles Thompson, executive director of the International Municipal Lawyers Association, says fines and fees are an unpredictable revenue source and that most cities don’t rely on them to balance budgets. Complaints and disputes between neighbors are sometimes at the root of residential code enforcement, and towns use fines as a deterrent or a penalty for failure to comply.

Thompson uses the code violation of overgrown grass as an example. While that might not prompt a neighbor to complain, if they put their home on the market, a real estate agent could call the town alleging a code violation, Thompson says. A $500 fine for tall grass could be excessive if the violation costs nothing to enforce, Thompson explains, but costs add up if officials have to visit multiple times to ensure compliance. Sometimes a property owner may not comply for several years, he adds.

“Is $500 excessive under those circumstances? I suggest not, because it’s not disproportionate to what it has cost … the government to try to enforce the law,” Thompson says.

Case law on excessive fines and fees centers on forfeitures. In the 1998 case United States v. Bajakajian, the U.S. Supreme Court ruled that under the Eighth Amendment, the federal government’s seizure of $357,144 in cash was “grossly disproportionate” to the defendant’s crime of trying to leave the country without declaring the money. In the 2019 case Timbs v. Indiana, the court found states are also subject to limits under the Eighth Amendment.

The Supreme Court sent Timbs back to the state court. In October 2019, the Indiana Supreme Court noted the high court had left “lower courts the task of establishing the appropriate measure of excessiveness,” and it took up the challenge. It found judges should consider whether forfeitures are “grossly disproportional to the gravity of the underlying offenses and the owner’s culpability.” Foster expects the opinion will guide judges when they rule on excessive fines and fees.

When driver’s licenses are revoked for unpaid parking or speeding tickets, people can fall into a debt spiral, and without a car, they can lose their jobs, Foster says. And the FFJC says people who can’t pay court-imposed fines sometimes face arrest and jail.

Since the early 1990s, a mantra of “no new taxes” has taken hold, making it harder for state and local governments to raise revenue, Foster says.

“Many local governments don’t have the authority to raise revenue from their states. They may have a limited sales tax base. They may not be able to impose an income tax,” she adds.

The coronavirus pandemic adds to the economic strain, but Foster hopes local governments resist the temptation to fall back on fines and fees. According to the FFJC, New York City, Chicago, Georgia and Orange County, California, are among the worst offenders, ramping up fines and fees even as COVID-19 has led to job losses.

But there are signs the reform movement is taking hold. President Joe Biden has proposed barring jail time for people who cannot afford to pay fines and fees, and he plans to target policies revoking driver’s licenses.

San Francisco Mayor London Breed has eliminated some fines and fees and offered discounts on others in her city. “In San Francisco, many of our fines and fees were putting people in significant financial distress with little gain for the government due to low collection rates,” Breed said last year.

In fact, San Francisco, Philadelphia, Chicago, Dallas and other cities and towns have joined an inaugural cohort committed to fines and fees reform. In 2018, the American Bar Association’s House of Delegates passed Resolution 114 advocating for limiting fines and fees, and a ban on jailing people because they can’t pay. The ABA has shared its guidelines with five states, including Oregon, Illinois and Montana.

While the impact of reform on fines and fees is uncertain, Mallory Meadows Farm, the Victors and millions of Americans are still feeling their effects today.

“With the economic challenges, this has just been a defeating experience,” Brewer says.

This story was originally published in the April/May 2021 issue of the ABA Journal under the headline: “Costly Codes: Fines and fees spark a movement for reform.”