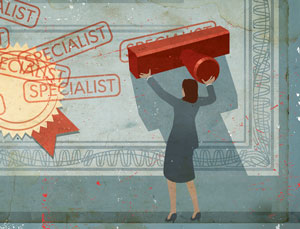 A federal district court has ruled that a Florida Bar prohibition against individual lawyers and law firms stating on their websites that they are specialists or experts in a practice field without being certified in that field violates the First Amendment of the U.S. Constitution. The ruling also applies to statements on blogs and social media.

Searcy Denney Scarola Barnhart & Shipley—a law firm that has offices in West Palm Beach and Tallahassee—and its five name partners challenged the constitutionality of the rule in a lawsuit filed in the U.S. District Court for the Northern District of Florida, which is based in Tallahassee. The firm concentrates its practice on representing plaintiffs in mass tort and product liability cases. Board certification is not available for these practice fields in Florida.

Searcy Denney’s lawsuit also challenged Rule 4-7.13 of the Florida Bar Rules. That rule prohibits a lawyer from engaging in “deceptive or misleading” advertising, including “references to past results, unless such information is objectively verifiable, subject to Rule 4-7.14.”

In an order on the merits issued Sept. 30 in Searcy v. Florida Bar, U.S. District Judge Robert L. Hinkle held that the challenge to Rule 4-7.13 was premature because the bar’s board of governors had not interpreted it in an unconstitutional manner. He noted that the rule does not presume that all references to past results cannot be objectively verified, leaving open the possibility that such statements could be allowed.

But Hinkle determined that the challenge to Rule 4-7.14 was ripe for review. “The application of this rule is clear,” wrote Hinkle in his order. “Searcy Denney cannot say it specializes or has expertise in mass tort or unsafe-product cases, or even in personal injury cases, even though the firm undeniably has expertise in these areas. Nor can any individual attorney claim to specialize or have expertise in mass tort or unsafe-product cases, even if the attorney handles only cases of that kind, and even if the attorney has successfully handled many such cases.”

The Florida Bar had argued that Rule 4-7.14 furthered its substantial interest in ensuring that members of the public would not be misled into believing that a lawyer claiming to specialize or have expertise in an area is board-certified.

The bar also stated in its pleadings that “if the state were prohibited from establishing any standards as a basis for claiming specialization or expertise, lawyers would be able to self-certify and any lawyer could claim to be an expert or specialist in any field.”

The problem, Hinkle wrote, is that Rule 4-7.14 “prohibits even truthful claims. Searcy Denney has expertise in mass tort and unsafe-product cases, as well as in personal injury cases generally. The bar has not denied it and could not reasonably do so. But Rule 4-7.14 prohibits Searcy Denney from noting on its website that it has expertise in those areas. Indeed, the bar prohibits every lawyer in the state from claiming expertise in mass tort or unsafe-product cases, because there is no board certification in these narrow fields. And the bar prohibits every law firm in the state from claiming expertise in personal injury cases, because law firms, as distinguished from individual lawyers, cannot be board-certified.”

Searcy is something of a companion to a ruling issued in December 2014 by the U.S. District Court for the Southern District of Florida, based in Miami. In Rubenstein v. Florida Bar, the court held that an ethics rule violated the First Amendment because it was interpreted by the bar to prohibit lawyers from citing results from past cases in radio and television commercials and indoor or outdoor display ads, unless those results were objectively verifiable. That rule was adopted by the Florida Supreme Court at the same time as Rules 4-7.13 and 4-7.14.

In both cases, the courts evaluated the restrictions under the test articulated by the U.S. Supreme Court in Central Hudson Gas & Electric Corp. v. Public Service Commission of New York as a way of evaluating restrictions on commercial speech, including lawyer advertising. Under that test, the government may restrict commercial speech that is not false or misleading, or that does not concern unlawful activity, only if it shows a substantial governmental interest in the regulation; demonstrates that the regulations directly and materially advance that substantial interest; and tailors the regulations narrowly.

In Searcy, Judge Hinkle determined that Rule 4-7.14 failed the Central Hudson test. Hinkle wrote that the bar failed to provide any “empirical or even anecdotal evidence” to support its argument. He also noted that if the bar really is concerned about people being misled about certification, it could educate the public about what it means to be self-certified or require attorneys to include a disclaimer with their advertising and websites.

“Since this was a First Amendment case, the bar had the burden of proving that the rule would materially advance an important state interest,” says Greg Beck, an attorney in Washington, D.C., who represented the plaintiffs in both Searcy and Rubenstein. “That the bar could produce no evidence to meet its burden was critical to the decision. In fact, the bar’s rationale is not even backed up by common sense. There is no reason to believe that a consumer would think that a statement about a lawyer’s specialization or expertise means that the lawyer has been certified by the Florida Bar. Lawyers who are certified by the Florida Bar can simply say so.”

The case “is a good example of how overregulation of advertising in the name of consumer protection can end up harming, rather than protecting, consumers,” Beck adds.

First Amendment experts reach a similar conclusion. “Under Central Hudson’s intermediate scrutiny test, the government bears the burden of explaining how prohibiting this speech furthers consumers’ interests in receiving accurate information,” says Helen Norton, a professor at the University of Colorado Law School. “Here the trial court found that the state ‘offered no empirical or even anecdotal evidence’ of such harm. It suggested instead that consumers might well find the contested speech helpful to their decision-making. Moreover, the court found that the government remained free to require lawyers to make truthful disclosures to inform consumers—e.g., to disclose whether they are or are not board-certified.”

Clay Calvert, a First Amendment scholar at the University of Florida, says that “Searcy is a great example of applying Central Hudson with teeth. Judge Hinkle demanded proof, not suspect speculation or convenient conjecture, that the public will be misled by representations of expertise and specialization. Frankly, the term board-certified used by the Florida Bar seems far more appropriate for the medical professional than the legal one. The Searcy law firm does specialize in the areas it claimed, regardless of whether it was board-certified,” Calvert says.

“The truth is,” he adds, “as Judge Hinkle made evident, that the firm ‘has expertise in mass tort and unsafe-product cases, as well as in personal injury cases.’ Perhaps then, as in the movie A Few Good Men, for purpose of analogy, the Florida Bar can’t handle the truth—unless it controls it.”

The takeaway, Norton says, “is that when the government regulates truthful commercial speech, it bears the burden of demonstrating how its regulation actually serves consumers’ interest in informed decision-making, and the trial court here found that the state did not meet that burden.”

This article originally appeared in the February 2016 issue of the ABA Journal with this headline: “Something Special: A U.S. district court strikes down Florida rules prohibiting lawyers who are not certified from advertising as specialists.”