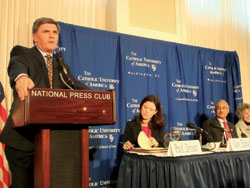 Robert Ehrlich delivered the keynote address and announced the formation of the new clinic at a criminal justice symposium in February.

When Robert Ehrlich was governor of Maryland, he took his pardon responsibilities seriously, assigning lawyers to investigate cases and holding monthly meetings throughout his term to consider applications.

Now he’s the vision behind a new clemency clinic at Catholic University of America’s law school that aims to help others take it seriously, too.

The clinic, which will open this fall, will offer clemency training sessions to governors-elect or their chiefs of staff, says CUA law professor Cara Drinan, who will help run the clinic. In addition, law students who enroll in the yearlong clinical course will help felons apply for pardons or com-mutations, expanding the work of the university’s Innocence Project clinic, says CUA law professor and project director Sandy Ogilvy.

Issuing an executive pardon or commutation can be tricky for politicians who fear political backlash, especially after the 1980s case of Willie Horton, a convicted murderer who committed rape during a prison furlough. “A fear factor arose and it’s still there,” Ehrlich says.

But Ehrlich notes that there are several worthy causes that should be considered, including people who have served their time but whose record prevents them from getting a job. In some states, for instance, an ex-convict is prohibited from getting a barber’s license.

Catholic University’s law school is one of several to offer this type of program. The University of St. Thomas School of Law in Minneapolis established a similar one two years ago and several other schools have them in the works, says law professor Mark Osler, who started the St. Thomas clinic. The demand for pardons also is high. Since March 2009, the University of Akron law school’s clemency project has had nearly 800 referrals from just one county in Ohio, says Joann Sahl, that clinic’s assistant director.

“It’s a huge issue,” she says. “All these people are coming to my clinic in order to get help, and they are all coming because of collateral consequences. They can’t get jobs. They can’t get housing.”