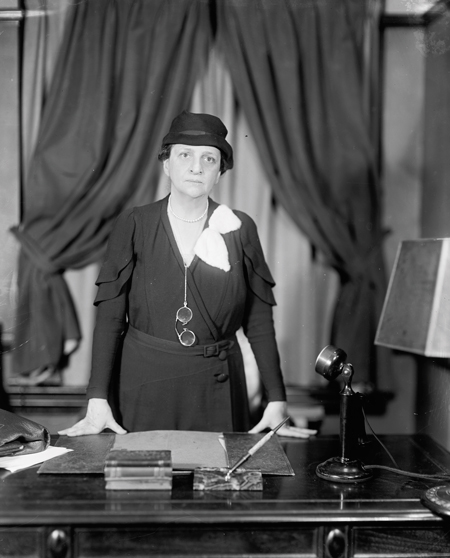 Photo of Frances Perkins courtesy of the Library of Congress

In White House historical photos, she is directly behind the president, standing in a plain, dark dress and a short-brimmed hat—the only woman in a very crowded Cabinet Room.

No reporters were present as Franklin D. Roosevelt signed the Social Security Act of 1935. But there were plenty of cameras. And there were plenty of men: New Deal luminaries who had familiar names, such as Barkley, Wagner, Dingell and La Follette—even Kentucky legislator Fred Vinson, who later became chief justice of the United States.

The legislation established government insurance for old age and unemployment, which even after the Great Crash was regarded with deep suspicion by those wary of a “Russianism” of government. Even so, Roosevelt intoned familiar themes of Great Depression populism: “Hope of many years’ standing ... startling industrial changes … some measure of protection ... the loss of a job … poverty-ridden old age.”

But when he handed the first ceremonial pen to Frances Perkins, it wasn’t an act of chivalry. She was Roosevelt’s secretary of labor and the major force behind the act.

Before she was the first woman to serve in a presidential Cabinet, Perkins bore the resumé of the do-gooder socialite: chemistry and physics at Mount Holyoke College; economics and political science at the Wharton School and Columbia University; a socially significant position in New York City as head of the Consumers League.

But in 1911, lunch with friends was interrupted by commotion at a nearby factory. The Triangle Shirtwaist Factory fire that day killed 146 people, and she arrived to witness dozens of women who leaped to their deaths from a workplace inferno several stories above the street.

Resolved by the experience, Perkins left the league to head New York City’s Committee on Safety and, later, the state Industrial Commission. Gaining a reputation as an able executive and a staunch workplace advocate, she was tapped by then-Gov. Roosevelt to head the state’s newly created Department of Labor. There, she helped forge the most stringent state regulation of wage and working conditions in the nation. By 1933, as she entered what would be a 12-year tenure as U.S. secretary of labor, Perkins carried a portfolio of ideas that would inform the New Deal agenda.

During that time, women often had power as radicals or anarchists. But while she worked with New York legislators, Perkins adopted a modest style of dress and manner calculated to render powerful men less hostile and more responsive, as though abiding their mothers. It worked there and at the White House.

On top of her departmental duties, Perkins insinuated her way onto myriad New Deal committees that wrestled with labor and social issues: minimum wage and workplace standards, job creation, child labor curbs and rules to govern organized labor. But as chair of the Committee on Economic Security, she gambled for a durable social safety net on pure political instinct.

By late 1934, Roosevelt was facing conservative resistance to his New Deal programs in Congress and the courts. Moreover, it would take years before those who had immediate needs would see any benefit from the social security Perkins favored. Roosevelt confided to others that the timing might not be right for old-age insurance.

Perkins was furious and confronted him, arguing that the nation’s dire condition might provide the political opportunity for a bold initiative. When Roosevelt gave her a Christmas deadline, Perkins invited the committee to her home, placed a bottle of scotch on a parlor table, and told them they were not to leave until they had framed a legislative proposal.

The results provided for a system of employment taxes and state grants to fund old-age benefits, unemployment insurance and disability assistance, and child welfare. Debated throughout the summer, it passed both houses by wide margins and was signed into law on Aug. 14, 1935. 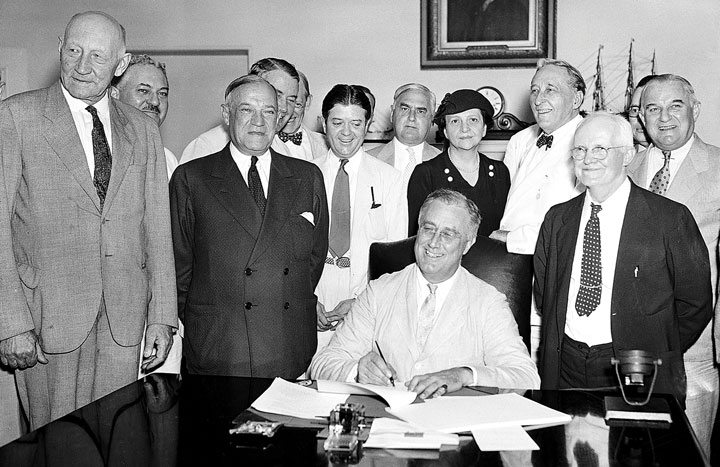 Secretary of Labor Frances Perkins was the major force behind the Social Security Act of 1935, which President Franklin D. Roosevelt (sitting) signed into law. AP Photo