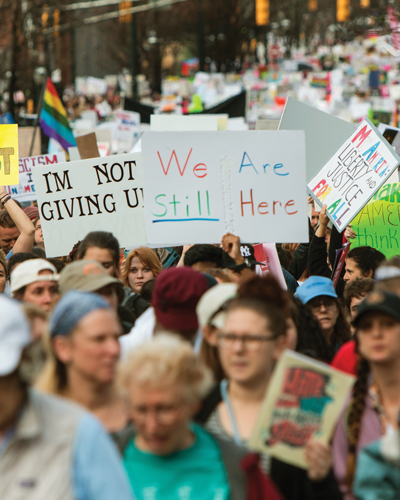 In the 1950s and 1960s, civil rights activists took to the streets to protest segregation laws, voting discrimination and racism. Their collective action of nonviolent mass protests galvanized communities, resulting in profound changes in American society.

Those efforts also led to a fertile development of First Amendment jurisprudence, as courts were forced to grapple with free expression claims from the protesters and the need for the government to ensure safety and security.

In 1961, for example, 200 African-American students marched down the streets of Columbia, South Carolina, singing religious hymns and carrying “Down with segregation” signs as they headed to the Statehouse. Authorities arrested 187 students for breach of the peace.

Their case reached the U.S. Supreme Court, which reversed the convictions in Edwards v. South Carolina (1963). “The circumstances in this case reflect an exercise of these constitutional rights in their most pristine and classic form,” Justice Potter Stewart wrote for the court. “The 14th Amendment does not permit a state to make criminal the peaceful expression of unpopular views.”

“We are certainly seeing an upsurge in social activism, from protesting in the streets and at airports to a huge increase in people contacting government representatives, attending town hall meetings and using social media to organize,” says Traci Yoder, director of education and research for the National Lawyers Guild in New York City.

As a result, legislators in nearly 20 states have responded with a flurry of bills that increase penalties for protesters, ban the wearing of masks, charge for police protection and even immunize drivers who hit protesters with their cars. Measures have been introduced in Arizona, Arkansas, Colorado, Florida, Georgia, Indiana, Iowa, Michigan, Minnesota, North Dakota, Oklahoma, South Dakota, Tennessee, Virginia and Washington.

These include an Arkansas bill that creates the crime of “unlawful mass picketing,” a bill in Iowa that would impose up to a five-year penalty for blocking a highway with protest activity, a measure in Arizona that would enable the police to seize the assets of protesters when a demonstration turns violent, and one in Minnesota that would prohibit protests on freeways and near airports and train stations.

In February, four measures in North Dakota—including one outlawing the wearing of masks in any public forum—were signed into law. One enables the governor to respond to protests using emergency powers.

Arkansas Senate Bill 550, which the governor vetoed on April 6, would have created the crime of unlawful mass picketing for those who obstruct access to lawful places of employment, public streets, highways, railways, airports or other means of travel. Republican Sen. Trent Garner, who introduced the measure, says it would have “made a clear distinction between constitutionally protected First Amendment rights and harmful actions.”

Garner says there can be reasonable restrictions to protect the public. The vetoed bill, he says, would have prevented a person from blocking another’s access to roads or to their workplace or home. “The line is clear: Someone has the right to protest until they take harmful actions against another person, like preventing a person who makes minimum wage from going to work or threatening violence against a citizen’s family outside of their home,” Garner says.

HOW FAR IS TOO FAR?

But some measures seem to go too far. “The government should be in the business of encouraging lawful assembly,” says John Whitehead, founder of the Rutherford Institute. “I see a lot of paranoia about free speech from the government. I saw the same thing in the 1960s when many people protested and engaged in activism. Government officials often target free expression if it imperils their agenda.”

“I’ve never seen a pattern this broad related to protest,” says Lee Rowland, senior staff attorney with the American Civil Liberties Union. “My sense is that this rash of bills followed a year of incredible activism in the streets. If we continue to see an active citizenry, my sense is that we will see more of these anti-protest bills.”

Several First Amendment experts label many of the proposals as unnecessary. “Another troubling thing about several of these bills is that they increase crimes for conduct that is already illegal,” says Cleveland-Marshall College of Law professor Kevin O’Neill.

John Inazu, a professor at Washington University School of Law in St. Louis, agrees. “Almost every jurisdiction already has laws on the books governing riot, unlawful assembly and peace disturbance,” he says. “If anything, some of these existing laws are too restrictive of First Amendment rights.”

Legal experts believe many of the measures were passed to suppress free expression. “Regardless of the substance of the protests, any legislation that reacts to robust protests in the street by attempting to punish protesters is a result not permitted by the Constitution and a fundamental misunderstanding of American values,” Rowland says.

Yoder believes some of the recent legislation justifies suppressing forms of dissent in the interest of public safety or national security, which can make them appear more legitimate. “I think it is important to note the context in which these bills were introduced,” she says. “The timing and exact focus of the bills indicate that they have been drafted to counter effective tactics used in recent protests.”

Some of the bills border on the ridiculous. “There is some evidence that many of these bills have stalled in part because they have rightfully received public mockery in response,” says Rowland. “Some of the more egregious bills, such as one in Tennessee that would immunize drivers for hitting protesters and one in Arizona that would allow protesters to lose their homes in forfeiture, have been soundly defeated.”

However, the protection of public highways may be another matter. There have been reports of highway protests preventing or delaying ambulances from reaching the hospital and causing other problems.

Republican Rep. Nick Zerwas, the chief sponsor of a measure in Minnesota that prohibits protests on freeways and roads near airports and trains, defends his bill as a common-sense measure to protect safety. “First Amendment rights of free speech don’t extend to the center lane of a freeway,” he says. “We have to keep our freeways and airports open and running.” Zerwas says he introduced the measure after two constituents reported missing medical or family appointments because of delays caused by protests.

“Protesting on public highways is a difficult area,” Rowland admits. “However, some of these measures that turn protesters into felons simply because they are on the road because there are so many protesters is problematic to say the least.”

Experts worry about the possible chilling effects such measures will have on demonstrations. Another impact may emerge during the ensuing legal responses.

O’Neill says some protesters may be unaware that permits are required for large gatherings, while others ignore such laws. “Some of the protesters seem to have taken a cue from the Occupy movement and refuse to obtain permits.”

“I think we can anticipate more attempts to limit protests through legislative measures in the near future, especially if protests continue to be effective in gaining media attention and mobilizing support,” Yoder says. “I suspect that a lot of the current bills are tests to see how far states can go in curbing dissent and punishing protesters and organizers.”

This article originally appeared in the June 2017 issue of the ABA Journal with the headline "Paying for Free Speech: Proposed laws to regulate public protests may be efforts to curb expression."