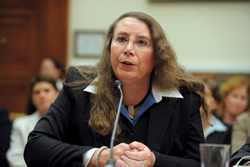 In 2005 the Georgia General Assembly hired Glenn Morrison to edit bills and resolutions in the Office of Legislative Counsel. Two years later, Morrison announced his intention to become a woman and was promptly fired.

Morrison, now Vandy Beth Glenn, was shocked. Glenn says she was told her gender transition would make other employees uncomfortable. “I really didn’t see how it could be a problem for anybody,” Glenn says. “I spent my workday in a windowless room, hidden away from the public. I turned the work around, and I did it well.”

Last July, Glenn sued the Georgia General Assembly for employment dis­crimination. In its motion to dismiss, the state assembly argued that Glenn, as a transgender person, is not a member of a protected class.

While the judge has yet to rule on the defense motion, Glenn may have reason for optimism. In the last year, at least two courts have ruled in favor of transgender individuals in cases that some legal scholars say show a legal and societal climate that is recognizing their unique issues.

“We’ve seen a bit of a reversal of the historic exclusion of transgender people under state and federal law,” says Jennifer Levi, a professor at Western New England College School of Law in Springfield, Mass., and the director of the Gay & Lesbian Advocates & Defenders’ Transgender Rights Project in Boston. “Transgender people have made a lot of progress, but much more remains.”

Title VII of the Civil Rights Act of 1964, which forbids discrimination on the basis of race, color, religion or national origin, does not specifically include trans­gender people.

Courts historically have declined to interpret the law as extending employment protection to transgender employees, reasoning that discrimination based upon sex applies to biological men and women and not to those who have changed their sex or who are in the process of doing so.

But in a groundbreaking case last fall, Schroer v. Billington, a federal district court judge in Washington, D.C., ruled that the Library of Congress violated Title VII when it rescinded a job offer upon learning the applicant was a transgender person. David Schroer was a U.S. Army Special Operations colonel leading a classified anti-terrorism unit before retiring and undergoing facial surgery to help him transform into a woman, Diane. While preparing for his sex change, Schroer applied for and received a job as a terrorism analyst at the Library of Congress. But the government revoked its job offer when it learned of his intentions.

Schroer sued, and the case went to trial. A spokesman for the Library of Congress declined comment, citing ongoing liti­gation. However, lawyers from the U.S. At­torney’s Of­fice in Washington, D.C., arguing on behalf of the Library of Congress, asserted in court that “there is no basis to conclude that transsexuals are, or were ever intended to be, a protected class under Title VII.”

Additionally, they argued that Schroer failed to prove bias against her based upon gender. “Plaintiff cannot prove that she was disparately treated merely by showing that a gender-conforming, nontransgender male was selected instead of her for the terrorism analyst position. Rather, the proper inquiry is whether plaintiff was treated disparately because of her ‘status’ as a woman when presenting herself as a female,” wrote the U.S. Attorney’s Office lawyers.

“The fact that plaintiff may have been (correctly) perceived ‘as a man in women’s clothing,’ or lacking credibility before members of Congress or her former colleagues in the military, emanate not from the fact that she was a ‘woman’ but from her transexuality.”

But last fall, U.S. District Judge James Robertson concluded that the Library of Congress illegally discriminated on the basis of sex, pointing out that “the evidence established that the library was enthusiastic about hiring David Schroer—until she disclosed her transexuality.”

“Imagine that an employee is fired because she converts from Christianity to Judaism,” Robertson wrote. “Imagine too that her employer testifies that he harbors no bias toward either Christians or Jews, but only ‘converts.’ That would be a clear case of discrimination ‘because of religion.’ No court would take seriously the notion that ‘converts’ are not covered by the statute.”

Damages have yet to be awarded in Schroer.

Advocates say they expect other courts to follow Schroer. “The ruling sends a clear message to employers that applicants should be judged on their qualifications for the job and not on whether they are male or female or transitioning from one gender to another,” says Wash­ington, D.C., lawyer Sharon McGowan of the American Civil Liberties Union, who represented Schroer.

But not everyone agrees that Title VII should protect transgender employees.

“It’s very problematic to put gender identity as a nondiscrimination category, because it’s not quantifi­able or objective,” says Mathew Staver, dean of Liberty Uni­versity School of Law in Lynchburg, Va., and founder of Liberty Counsel, a nonprofit focusing on civil rights. “Gender identity involves your individual expression, and that is changeable.”

However, transgender advocates and some legal scholars say the case could have a significant impact. “It’s a hugely important case,” says Suzanne Goldberg, a Columbia University law professor who specializes in sexuality and gender law issues. “The court went through a trial. It had the chance to listen closely to the government’s defenses and saw through them as covers for discrimination.”

NO INTENT TO DECEIVE

In another significant development, the Georgia Supreme Court dismissed a petition last fall to contest an election in a local city council race on grounds of fraud, misconduct and other irregularities. Two of the candidates had claimed that a transgender politician in the election misled voters by running as a woman. Michelle Bruce had served four years on the River­dale, Ga., city council before losing a re-election bid in 2007.

The state’s high court found that Bruce’s opponents failed to produce evidence of fraud, misconduct or illegal action, holding that Bruce’s use of the name Michelle did not “cast doubt on the results of the election.”

The ruling is the first in the country to address whether a politician lies to the public by running as a transgender candidate, lawyers say.

While advocates of transgender rights applauded the ruling, Michael King of Jonesboro, Ga., the attorney for the plaintiffs, says the case was never “an attack against someone who was transgender.”

“This is a case about using your correct legal name on the ballot,” says King.

Meanwhile the city of Silverton, Ore., elected the country’s first openly transgender mayor this past fall. Stu Rasmussen had twice before been mayor of the small city, but this time he was elected post-breast-implant surgery.

President Barack Obama also announced after his election his intention to include gender identity in the new administration’s nondiscrimination employment policy.

Advocates say this kind of anecdotal evidence shows that society is beginning to accept transgender people into their communities and working worlds.

The American Bar Association also has been studying the issue. In 2007, the ABA created the Commission on Sexual Orientation and Gender Identity to better understand the problems confronted by transgender lawyers in the profession. Commission-sponsored focus groups revealed that the experiences of transgender lawyers are much more difficult than those of lesbian, gay or bisexual attorneys, says Jeffrey Gibson, a San Francisco lawyer who chairs the commission.

He cites testimony of one transgender lawyer who was called an “it” by a judge.

“There’s still a lot of work to persuade people on the issue of inclusion,” says Gibson.

having personal characteristics (as transsexuality or transvestism) that transcend traditional gender boundaries and corresponding sexual norms.