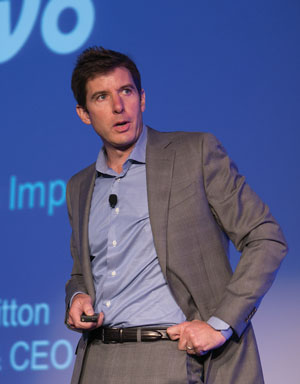 With a mission to present issues “intended to be provocative,” the House of Delegates’ Committee on Issues of Concern to the Profession did just that with five short speeches.

Perhaps the most provocative of the group was Avvo founder and CEO Mark Britton, who urged the audience to start “looking at this through the lens of innovation.” The legal profession is concerned about the unauthorized practice of law, he said, but that keeps innovators out. Meanwhile, he said, four out of five low-income litigants are unrepresented; 7.5 million people have asked questions on Avvo; and 34 percent in a survey said lawyers have nothing to offer society. Britton said the solution is for lawyers to “get rid of UPL” and partner with experts in other fields.

The talks grew out of the research of the Commission on the Future of Legal Services. That commission was created last year by then-ABA President William C. Hubbard to address the problems created by the rise in pro se litigants, the ongoing lack of court funding and the rise of technology to fill some of those gaps.

Bay Area Legal Aid Executive Director Alex Gulotta spoke about the “complex maze” of public interest and pro bono groups that confronts people of modest means. He advocated creating a single “point of entry” for each part of the country, where people seeking justice can be helped more efficiently. Presiding Judge Carolyn Kuhl of the Los Angeles County Superior Court illustrated the high pro se load in Los Angeles with photos of long lines in hallways, at help desks and even wrapped around the outside of the building. Her court has the largest caseload in the country, she said, and about half of all cases have at least one unrepresented litigant. In family law, it’s 80 percent. She suggested getting rid of procedural rules that lengthen and complicate the process, and having litigants use a TurboTax-like form to guide them through basic filings. The court has already implemented a version of the latter, with an avatar to guide people through online traffic-ticket filings.

Closing out the session was Chief Justice Barbara Madsen of the Washington Supreme Court, who said her state had “tried everything” to address a flood of pro se litigants and a rise in UPL. It was not enough, she said, so the state bar association decided that “maybe not every single problem needs to be solved by a lawyer.” That’s how Washington’s limited license legal technician program was born, she said, and the state bar has moved from grudging acceptance to embracing it.

This article originally appeared in the October 2015 issue of the ABA Journal with this headline: “Want Innovation and Access to Justice? Get rid of UPL, Avvo founder tells House during TED Talk-like speeches.”