Google Glass brings out the technophobes--and the lawyers 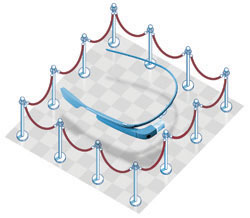 Waiting for its arrival has some gadget geeks in a high-tech tizzy. The anticipation is practically unbearable—sort of like when you were a kid and you ordered those naughty (you hoped) X-ray specs out of the back of a magazine.

But while this new “latest thing” is an order-of-magnitude advancement from X-ray specs, it’s just not feeling the love from the legal community nearly as much as from the techies.

What are we talking about? Google Glass.

The device, rumored to become available to the general public early this year, looks like a futuristic pair of eyeglasses but features Internet connectivity with a built-in monitor, camera and microphone. This, of course, gives it capabilities for recording, saving and uploading anything the wearer can see or hear.

Which is to say: This little gizmo is destined to be a lawsuit magnet.

Of all the legal concerns being raised about Glass—which has been in beta release since April to a select group paying $1,500 apiece—the most numerous have to do with privacy. As if there aren’t already enough cameras keeping track of us on a daily basis, soon it might be that anyone walking down the street, sitting next to you on the bus or walking through the locker room could be recording everything he or she sees or hears.

So it should come as no surprise that there is already a lengthy list of establishments that have issued pre-emptive bans on Glass, including banks/ATMs (ID theft), concert venues (IP theft), hospitals (IV theft?), casinos (cheating) and classrooms (ditto).

Places that serve alcohol—like bars and strip, er, gentlemen’s clubs—would prefer to remain bastions of what-happens-there-stays-there, and one bar in Seattle made that very clear. The 5 Point Cafe minced no words in a blog post, referring to potential Glass wearers as the “fanny-pack-wearing, never-removing-your-Bluetooth-headset-wearing crowd,” and emphasized that “the 5 Point is a no-Google-Glass zone. Respect our customers’ privacy as we’d expect them to respect yours.”

The naysaying has even degenerated to the point of name-calling: Some of those seen sporting the Glass prototype have been referred to as “Glassholes.” That’s quite a backlash against a product that hasn’t officially made its entrance into the marketplace.

On the legislative front, several states are preparing bills that will ban the wearing of the headset while driving, deeming it a dangerous distraction. Insurance companies are also addressing the issue.

In an October incident, a San Diego driver ticketed for speeding was additionally cited for wearing Google Glass. Cecilia Abadie claims—in a post to Google Plus—that yes, she was wearing the device; but no, it wasn’t turned on. She says in the post that she intends to fight the ticket in court and hopes to set a favorable precedent for future Glass wearers.

So is all this resistance to the implementation of Glass into our lives simply technophobia masquerading as social concern and activism? Some of it, maybe. But it might be wise to get used to this type of change, because pretty soon the drones will be here.

This article originally appeared in the January 2014 issue of the ABA Journal with this headline: “Nowhere to Hide: This modern marvel brings out the technophobes—and the lawyers.”