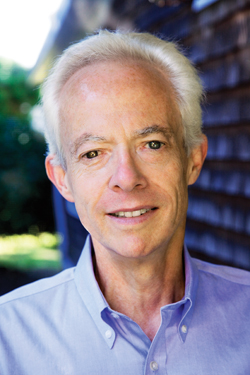 "Unleashed" is a word the folks at Fujitsu use to describe scanning with their new mobile scanner, the ScanSnap iX100. While I usually balk at using words fed to me by a product's manufacturer, this one happens to be just right.

The iX100 has its own built-in Wi-Fi transmitter. If no Wi-Fi network is available (or if you prefer not to risk connecting to a potentially insecure network), simply connect to the iX100's direct Wi-Fi signal. You can do this from either a computer or a mobile device.

With that anywhere, any-device connectivity, an integrated lithium battery, weight of less than a pound, and a size that fits easily in a briefcase (10.74 x 1.87 x 1.42 inches), the iX100 truly is scanning unleashed. 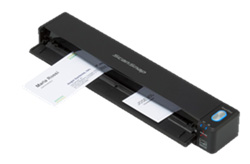 Photo of the ScanSnap iX100 courtesy of Fujitsu

Although compact, this scanner performs well and is easy to use. Performance is boosted by an internal microprocessor, the same one used in the desktop iX500. This chip allows the iX100 to create PDF and JPEG files and correct the images internally, then deliver them to your device quickly. It scans at a rate of 5.2 seconds per page.

One button operates the scanner. To turn it on, fold down the page feeder. Insert a document and press the button. To scan multiple pages, continue feeding them. There is no automatic page feeder, but the iX100 still makes fast work of a short stack of documents. Automatic de-skewing, paper-size detection and color detection produced high-quality scans every time in my testing.

For smaller documents, such as business cards, load them as fast as your hands can move. A dual scan feature lets you feed in new cards even as other cards are still scanning. The iX100 scans each card as a separate image and recognizes the text.

Documents wider than 8.5 inches can be scanned using the iX100's automatic image stitching. Fold the document in half and scan both sides. When the device detects that the two sides appear to be connected along the centerline, it stitches them together into a single image.

When using the iX100 with a computer, scans can be saved on the computer or sent directly to cloud services such as Dropbox, Google Docs, Evernote, SugarSync and SharePoint. Scans also can be sent directly to email, to a printer or to other applications that you configure.

The iX100 comes with ScanSnap Organizer software that allows you to store, search, view, organize and export scans. It also comes with CardMinder software for organizing business cards. CardMinder keeps an image of the card and also extracts the text into contact fields that can be used there or exported into Outlook.

I was sent a review version of the scanner before it was officially released in the U.S. The first time I installed it on my Windows 7 laptop, it worked perfectly for a short time and then stopped, sending error messages instead of scans.

Fujitsu's tech support diagnosed the problem within minutes as a conflict caused by my Windows security settings. After one adjustment, everything worked seamlessly. I installed the scanner elsewhere without any problems.

A free app, the ScanSnap Connect Application, connects my iPhone to the scanner wirelessly. To switch between scanning to a computer or to the app, simply start or close the app.

The retail price of the iX100 is $229. Its built-in wireless function, compact size and ability to connect to any device make it an ideal scanner for the mobile lawyer.

And even in an office setting, it works well for quick desktop scanning of routine documents.

This article originally appeared in the December 2014 issue of the ABA Journal with this headline: "A Scanner Unleashed: The new ScanSnap iX100 works anywhere, with any device."

Robert Ambrogi is a Rockport, Massachusetts, lawyer and writer. He covers technology at his blog LawSites and co-hosts the legal affairs podcast Lawyer2Lawyer.