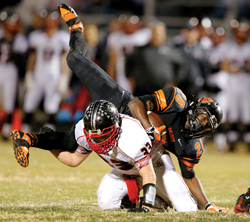 Oklahoma City’s Douglass Trojans turned to the courts, to no avail, after a referee’s mistake cost them a shot at the state championship. AP Photo/The Oklahoman, Bryan Terry

In one of football's last-gasp comeback plays, the "Hail Mary" pass, the losing team's quarterback rolls back and launches the football as far as possible hoping one of his receivers can—as in the answer to a prayer—haul in the toss and win the game.

In Oklahoma last December, a high school district attempted the legal equivalent of a Hail Mary, seeking a court order to replay a portion or all of a high school playoff game. The court, however, deferred instead to the state high school athletic association, which ruled the game complete and upheld the high school team’s loss.

It was an unusual case, but one that may come up more often.

“These cases are uncommon,” says Michael McCann, a law professor and director of the Sports and Entertainment Law Institute at the University of New Hampshire. “I think that most attorneys reason—correctly, in my view—that a dispute over the outcome of a sporting event does not constitute a potential legal harm, and thus they discourage their clients from filing a lawsuit.”

Yet, says Tim Davis, a law professor at Wake Forest University who teaches sports law, “because of the increase in the recording of athletic events—but under circumstances where referees do not have access to video review—we may see a few more lawsuits of this nature. I doubt, however, that we’ll see many.”

However, Davis says, many of these lawsuits arise not only because of the litigious nature of society “but perhaps more importantly because of the interests at stake. For example, a loss of athletic eligibility may compromise an athlete’s opportunity to receive a college athletic scholarship.” He says there are “a substantial number of lawsuits that challenge high school associations’ decisions involving other matters such as student-athlete eligibility.”

The Oklahoma controversy began on Nov. 28 during a quarterfinal battle between Frederick A. Douglass High School and Locust Grove High School. Douglass scored an apparent touchdown on a 58-yard pass to take a lead over favored Locust Grove with just over a minute left in the game. However, a referee penalized Douglass, saying that one of the team’s coaches had impeded a referee on the sideline. The officials negated the touch-down rather than impose the correct penalty, either a 5-yard loss on the ensuing extra-point attempt or on the kickoff. The referee’s blunder cost Douglass the game.

The Oklahoma City Public Schools District, within which Douglass is located, sued the Oklahoma Secondary School Activities Association in Oklahoma County District Court. The school district contended that the official’s interpretation of the association’s rules was unreasonable and arbitrary, and it sought the remedy of replaying either the game’s last few minutes or the entire game.

A temporary restraining order was issued Dec. 4, while the judge considered the arguments. However, a week later Judge Bernard M. Jones denied the request for relief in Independent School District No. I-89 v. Oklahoma Secondary School Activities Association.

Jones ruled that though the quarterfinal playoff game may have been unfair, there was no legal right to sue to change the outcome of the game. He reasoned that there was no underlying right or protected property interest upon which the plaintiffs could rely. Jones also noted “various public policy concerns” that supported his result.

“What transpired during and to some degree after the disputed quarterfinal could be considered by many as a tragedy,” Jones wrote. “More tragic, however, would be for this court to assert itself in this matter. While mindful of the frustrations of the young athletes who feel deprived by the inaction of defendant, it borders on the unreasonable—and in some respects extends far beyond the purview of the judiciary—to think this court is more equipped or better qualified than defendant to decide the outcome or any portion of a high school football game.”

“There is neither statute nor case law allowing this court discretion to order the replaying of a high school football game,” Jones concluded, adding: “This slippery slope of solving athletic contests in court instead of on campus will inevitably usher in a new era of robed referees and meritless litigation due to disagreement with or disdain for decisions of gaming officials—an unintended consequence which hurts both the court system and the citizens it is designed to protect.”

Keith Sinor, athletic director for the Oklahoma City Public Schools District, says, “From the beginning, the [district] has been clear that we have a responsibility to support student-athletes and do what is right. The Oklahoma Secondary Schools Athletic Association game official admittedly applied the wrong penalty and [the district] followed the proper legal process to request the wrong be made right. The judge’s decision presents an opportunity for the OSSAA to review and address the processes and procedures that affect every student-athlete in Oklahoma.”

Experts support Jones’ reasoning. “The decision in the Oklahoma case was absolutely the correct decision,” says sports business scholar Marc Edelman, who teaches at the Zicklin School of Business at Baruch College, part of the City University of New York. “These types of cases happen from time to time, but usually these cases don’t get very far. Courts take the general view that they should not interfere with decisions of private associations.”

“As a general rule, the hands-off policy is excellent because courts would become burdened and the dockets would be clogged,” Edelman says. “Courts also lack the experience to evaluate the minutiae of associations’ internal rules unless there are allegations of bad faith or clear violations of federal or state law.”

Deference to high school associations extends beyond more unusual cases to change the outcome of games but also to lawsuits challenging other rulings by state athletic associations, such as decisions forfeiting a team’s victory.

In one case, the New York State Supreme Court in Monroe County determined that a high school association was correct in dismissing a school from a quarterfinal playoff game for using an ineligible player. The state athletic association had forfeited Aquinas Institute of Rochester’s win over another school, Pittsford, because Aquinas quarterback Jake Zembiec was ineligible since he had not played in the minimum number of three regular season games. Zembiec, a major college recruit, had only played in two games during the season because of an injury, according to the Rochester Democrat & Chronicle.

Aquinas challenged the association’s ruling. However, Supreme Court Justice Scott Odorisi rejected the suit and ruled in favor of the association in his Oct. 31, 2014, decision in Aquinas Institute of Rochester v. Cerone. Odorisi quoted precedent for the proposition that “courts should not interfere with the internal affairs, proceedings, rules and orders of a high school athletic association unless there is evidence of acts which are arbitrary, capricious or an abuse of discretion.”

The outcome in these decisions in Oklahoma and New York raises the question: When can a high school team or district challenge an athletic association’s decision?

Ultimately, Wake Forest’s Davis says, it may come to the matter of teaching young athletes how to have perspective on team sports. “Perhaps allowing this type of lawsuit to proceed would send the wrong message to student-athletes about the true value of engaging in athletic participation.”

This article originally appeared in the March 2015 issue of the ABA Journal with this headline: “Court Drops ‘Hail Mary’: High school fumbles a last-gasp legal play.”