His Town: Firefighter, Lawyer, Now Mayor of the City He Helped Incorporate 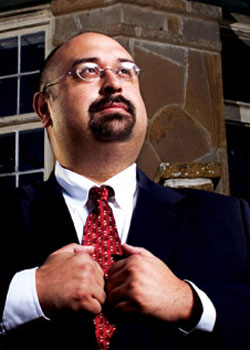 Lawyer Arturo Martínez de Vara’s hometown of Von Ormy, Texas, is a community where people talk about the Texas Revolution as if it were yesterday.

Settled before the Alamo fell, Von Ormy, population 1,300 and 15 miles southwest of downtown San Antonio, is rich in history but short on amenities. It features a post office, two churches and three truck stops. There is no cable TV or high-speed Internet service. Flash floods wipe out dirt roads in spring and fall, when powerful storms known as “Blue Northers” blow south from the Rocky Mountains.

It was during one of these storms in 2004 when Martínez de Vara, while answering distress calls as a volunteer firefighter, joined a discussion that changed the community forever.

“Why didn’t the county government do something to fix this flooding problem?” he recalls firefighters asking. Then one chimed in: “Why not form a city and do it ourselves?”

“We had talked about it before,” says volunteer fire chief John Ortega Sr. “Art finally decided ‘I’m going to do this.’ He was passionate about getting it done.”

Martínez de Vara, 35, grew up in Houston but spent summers in Von Ormy, where his mother’s family has lived for six generations. He returned to stay with his grandmother while attending St. Mary’s University School of Law in San Antonio, graduating with a dual degree in theology and law in 2007.

It took about as long for Von Ormy to win incorporation as it did for him to become a lawyer. He was elected the city’s first mayor in November 2008 and re-elected two years later. Now he juggles a general law practice with an unpaid mayoral job leading a city of 1.8 square miles, one of Texas’ smallest.

And he’s taking time off from his practice to be chief of staff to a state representative in this year’s Texas legislature session.

It’s not unusual for him to arrive late to his office at Ramírez & Martínez de Vara in San Antonio because of pressing city business. The morning after Tropical Storm Hermine slammed the area in September, he went street by street in rubber boots in the gusty winds and rain, photographing the flooding.

“It was a great way for us to identify drainage issues,” he says. “Now we know where we need to deepen and widen the culverts.”

There were plenty of skeptics in 2006 when Martínez de Vara and others formed the Committee to Incorporate Von Ormy. “Everybody was telling us, ‘You’re too rural, you’re too poor, you’re too Mexican. It’s never going to happen,’ ” he recalls. “Some people just believe it and give up. Others say, ‘Why not Von Ormy? Why can’t we provide limited services?’ ”

Incorporation required a vote, but Von Ormy was prohibited from holding local elections because it lay within an area of San Antonio governed by extraterritorial jurisdiction, a status conveyed by state statute on unincorporated areas just outside most municipal boundaries. City ordinances, codes and fees are in effect in such areas, and while residents were allowed to vote in San Antonio city council elections, they did not pay city taxes.

“It seemed unconstitutional,” Martínez de Vara recalls. But a court battle would have been long and costly, so the committee sought relief from the Texas legislature instead, proposing a new law.

At a House of Representatives committee hearing in April 2007, Martínez de Vara argued that identifiable communities established before extraterritorial jurisdiction should be allowed to incorporate. “We were a city since colonial times, and San Antonio literally grew into us,” he says. “By any standard we were underserviced. There was really no governmental purpose to deny us an election.”

Their bill never went to a vote because the hearing got results. San Antonio acquiesced to an election; and on May 10, 2008, Von Ormy voted 117 to 16 for incorporation. Residents took turns ringing the 1840s-era bell at Sacred Heart Catholic Church for an hour. It was the longest victory peal since the end of World War II.

But their challenge had just begun. Their new mayor “literally started with nothing,” says Lorenzo “Larry” Contreras, manager of a regional grocery store near Von Ormy. “There’s no money, there’s no city hall, there’s no infrastructure. He has to show the vision of what the city can be.”

When not enough residents turned out to city council meetings, he convened five neighborhood meetings, City Clerk Julia Hernandez says. “I watched how he spoke to them, how he answered their questions. They would come with an attitude. When they would leave they would say, ‘How can we help?’ ”

The new city employs two full-time paid workers: Hernandez, who worked initially as a volunteer, and City Administrator Jesus A. Garza, hired this past fall to focus on grant writing and implementing a master plan.

Providing sewer service is a top priority. Von Ormy also plans to develop a business corridor along Interstate 35, a major byway from north of Texas to the Mexico border, to generate taxes for residential services.

Where some people see daunting obstacles, the mayor sees only blue sky: “Rarely do you get a clean slate like we have. We’re not burdened with a lot of policies and infrastructure from the last century.

“We’re poised very well to become one of the economic miracles of the area because of our willingness to be aggressive.”