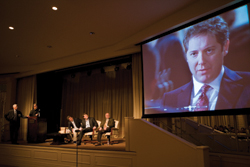 Maybe it was the venue: a theater at Paramount Studios, where movies are premiered for VIPs. But a few hundred of the American Bar Foundation fellows—a gathering of the law profession’s elite—got a dose of what Hollywood thinks of them. And it wasn’t all that bad.

“You could do worse than study movies,” said keynote speaker Paul Bergman, whose research as a professor at nearby UCLA School of Law includes law and popular culture. Movies about the law reflect society’s views of lawyers and the justice system, Bergman said. Not only that, but “they in some ways help create it.”

Consider trials. In these days of collaborative law, plea bargaining, arbitration and mediation, for instance, the trial has become a diminished expectation. Though this could be considered the “signal event of our legal system,” said Bergman, the very idea of a trial is becoming a term of art.

“Think about it,” Bergman continued. “Where are trials alive? In the movies everyone goes to trial. Those of us on the inside know that is less true than it used to be.”

With thousands of lawyers coming to LA for the midyear meeting, Hollywood and its love/hate relationship with the lawyers it portrays in movies and television was never far away. A day earlier, for instance, Bergman’s co-researcher, UCLA professor Michael Asimow, moderated a panel discussion that included three unrepentant lawyers who write for the TV legal dramas Law & Order, Boston Legal and Shark.

The program title said it all: “Law­yers on TV—the Good, the Bad and the Ugly—and the People Who Script Them That Way.” The primary sponsor was the ABA Section of Administrative Law and Regulatory Practice, which Asimow chairs.

“I frankly don’t care [whether the dramas might hurt the image of lawyers],” says Bill Fordes, a writer for Law & Order who spent six years as an assistant district attorney in New York City before switching to complex white-collar and civil litigation. “I write what amuses me.”

WHERE THE DOLLARS ARE

Fordes notes that, if you want, you can watch honest lawyers on Court TV, which gets only about 600,000 viewers and nowhere near the big dollars for 30- and 60-second commercials flowing to L&O.

Fordes was joined onstage by Bill Chais, a former public defender and criminal defense lawyer who is now a writer and supervising producer for the CBS legal drama Shark; Craig Turk, a producer/writer on ABC’s Boston Legal who served as chief counsel to John McCain’s 2000 pres­idential bid; and Chuck Rosenberg, who was earlier to the game as a technical adviser for the groundbreaking legal drama L.A. Law, and who does the same with Boston Legal while maintaining a full-time intellectual property and entertainment law practice in nearby Santa Monica.

Much of the discussion concerned the way television sometimes takes great license with the actual rules and procedures of litigation, and often portrays lawyers as disgusting and unethical.

During a Q&A session with the audience at the end of the presentation, Chais described the transition from practicing law carefully and meticulously to now writing about it fast and loose.

“Easiest thing I’ve ever done,” he said, eliciting an audience response that could have been recorded as a laugh track for a comedy show. “We do take it seriously, but once you say we’re going to relax what is real, it’s just so easy.”

There was consensus among the panelists that while they may, in effect, be changing the lyrics of the law, they’re still humming the true tunes of the justice system.

Turk, whose character Alan Shore (portrayed by James Spader) on Boston Legal is considered one of the most ethically conflicted major characters in television, says TV lawyers who cross the line “usually do so for the greater good.”