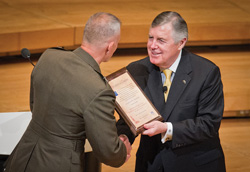 Robinson, the member-in-charge of the Florence, Ky., office of Frost Brown Todd, said he was so pleased to have all five in attendance at the opening assembly. “And it’s especially gratifying that all five TJAGS are members of the ABA,” he added.

Receiving presidential citations for 2012 were Lt. Gen. Richard Harding of the Air Force; Lt. Gen. Dana Chipman of the Army; Rear Adm. Frederick Kenney of the Coast Guard; Maj. Gen. Vaughn Ary of the Marine Corps; and Vice Adm. Nanette DeRenzi, who became the judge advocate general of the Navy on July 20.

Looking on was Jack L. Rives, who was TJAG of the Air Force before becoming the association’s executive director in 2010.

The citations reflect the closer working relationship that has been developing between the ABA and the military’s legal community on a number of fronts in recent years. “The American military defends and protects our constitutional democracy,” said Robinson after the ceremony. “The ABA can never adequately express our respect and appreciation for our military, but we will continue to try to show that appreciation.”

The presentation of certificates followed Robinson’s remarks, which called on members of the bar to advocate for court funding. Praising the Task Force on the Preservation of the Justice System for its work raising awareness of the issues, he noted that the effort is far from complete. It’s up to the bar to “explain to the American people what our courts do and why they matter.” 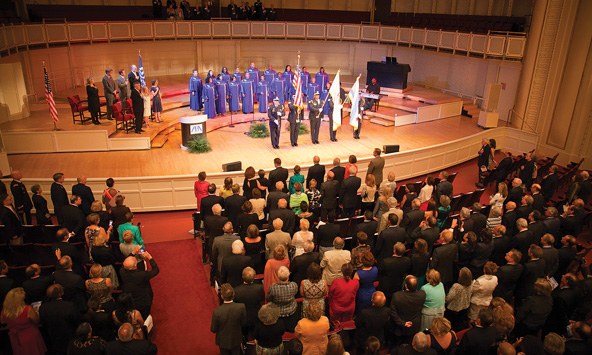