How should you handle a bad news client? 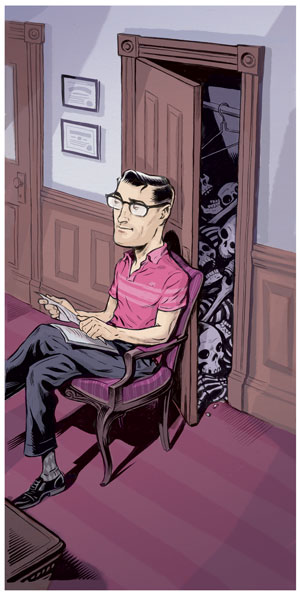 Is there anything you wouldn't do for a paying client? Whether you are a solo practitioner or a lawyer in a firm, the realities of the legal business cause money to loom large in your thought process. Clients whose personalities or line of business might have sent up red-flag warning signals to us 20 years ago are now too precious for us to let them walk out the door.

The misplaced enthusiasm for a client who pays your bills could lead to your profound unhappiness. It could reshape your life, and it could cause your personal life to be put at risk. It could get you disbarred.

Here’s an example. Many years ago, a trial lawyer in Philadelphia referred a wealthy client to me. His referral came with a caveat: Ask her why she fired her last lawyer. Red flag!

I did ask her, and she had a perfectly reasonable explanation: Her last lawyer had a conflict of interest and had to withdraw. Would it be OK with her if I called her former lawyer just to check that out? No, it wasn’t OK. Red flag!

She had a convoluted but reasonable explanation for that, too. So, believing I had done my due diligence, I brought her and her business into the firm. She paid her bills but insisted on coming in person to do so. And then she wouldn’t leave.

Her problem? She was so wrapped up in the litigation I was handling for her that she couldn’t stop talking about it. She buttonholed anyone who would listen to her rants. She was, most likely, mentally ill, because her obsession bordered on mania.

She called me at home. She discovered where I lived, and she waited for me in the morning as I left for work. Two years and many angst-ridden nights later, the firm had to hire a guard to keep the client out of our offices, and I started to leave for work using my back door.

You can now research anyone on the Internet and find out whether they have donated to a candidate or a political party. This could be important if the client or you yourself are passionate about a cause. Imagine that you are involved with a lawyers’ group that is active in ensuring that Roe v. Wade remains the law of the land. And then imagine that your potential client is a passionate believer that abortion is murder. Red flag!

If you start representing him and he discovers your activism, will he fire you? Or demand that you stop supporting your group in order to keep his business?

You will have to choose among three unpleasant options: Fire the client, let the client fire you or stop supporting your group.

Again, the Internet is a fount of information. Does your client have a felony conviction? Is s/he a pedophile? Unless you’re a criminal lawyer hired to defend against a prosecution, this is a possible red flag.

It may make no difference at all to you or to your representation of your client. But if it does, it is better to find it out before this information bites you in the rear—as your opponent cross-examines your client about these sins.

Web-based resources also allow you to check the accuracy of what your client tells you. But sometimes you can’t do a thing about lies he tells to others, or even lies he tells to you after you have accepted representation. There are no red flags until it’s too late.

For example, I represented a client who surreptitiously changed a portion of a contract that was the final document, ready for everyone’s signature. I think he thought no one would notice. The clause he inserted was buried in a long paragraph, and it was most emphatically not part of the deal. He attempted to bypass my discovery of his chicanery by saying he was in the neighborhood of opposing counsel and would drop off the document. I found out about the deception when opposing counsel called me in high dudgeon. Luckily, I have always had a reputation for honesty, and opposing counsel knew me, so he knew I had nothing to do with my client’s machinations.

I have to admit, representing a client who has set off an international dispute between the United States and another country can be fun, as long as the client recognizes that he is in deep poop. I had the pleasure of just such a representation when one of my environmental clients attempted to dispose of hazardous waste by shipping it out of the country. Red flag!

He claimed he believed that he had an overseas purchaser for the chemicals involved.

His chicanery gave me the opportunity to interact with many foreign agencies, as well as with our Environmental Protection Agency and our Department of State. All of them were angry, and none of them bought his story. I brought in a criminal lawyer to represent him for the many crimes he was charged with. The client was 78 years old, and he told us our goal was to keep him out of jail.

The cost to clean up the hazardous materials was just shy of $2 million. The client authorized us to offer all of his money to pay for the cleanup—just keep him out of jail. Between his two lawyers, the client got the deal of a century. He was put under house detention for a year, as long as he paid for the cleanup.

Was the client happy? Of course not. He was pissed off that his team literally offered up all his money, including his 401(k) account.

In this case, the most important thing, as I learned from my new friend the criminal lawyer, was to be paid up front, before the client had to divest himself of his money.

THE CLIENT WHO THROWS YOU UNDER THE BUS

I had an eccentric client who loved raptors, and he brought a peregrine falcon on his hand into my office when we met. Red flag!

I thought it was charming. He paid his bills, seeking advice on opening a zoo.

However, when he was arrested for illegally importing endangered hawks, he used a surprising defense. He told authorities that I had told him what he was doing was legal. I was shocked to get a call from a U.S. attorney wanting me to submit to an interview.

Of course, being a careful lawyer, I had put in writing in a letter to the client that what the client wanted to do was illegal, and I had a copy of the letter to prove it. But I did have to hire a criminal defense attorney for myself to negotiate the thicket of attorney-client privilege issues and to convince the client that my testimony would not help him.

The moral of all these stories is: Heed the red flag. That and some common sense can help steer you away from the client who pays your bills but can cause you untold misery. Money isn’t everything.

This article originally appeared in the July 2015 issue of the ABA Journal with this headline: “The Bad News Client: Once you see a warning flag, it might be best to let a client go.”