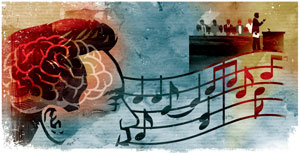 I am driving to the law school where I work, listening to Sirius radio. The Bridge plays music from the 1960s and '70s. Carly Simon sings "You're so vain. I bet you think this song is about you, don't you, don't you?" with Mick Jagger adding a sneering background vocal in unison.

The music is a soundtrack for my thoughts. My mind drifts off and I think about what happened to me at the faculty meeting the other day. That is, I tell myself a story about what happened at the faculty meeting after I received some minor public recognition along with a faculty scholarship award. After the meeting was over, several individuals congratulated me. But one of my colleagues walked past me at the end of the meeting; and though we made distinct and apparent eye contact, my colleague said nothing.

“Just walked right past me,” I say to myself aloud, although there is no one else with me in the car. In my thoughts, I replay images of my colleague passing me without speaking. There is a contextual “backstory” here too: a history of negativity between us—a progression of difficult and tense moments of conflict. I now perceive motivation: My colleague’s actions were an intended slight. My emotional response is equally apparent: I am pissed off. What provokes my emotion is, perhaps, not what actually happened at the faculty meeting but my reimagining of it—the personal and internal “story” that I tell myself; my reinterpretation of the movie replaying in my imagination against Simon’s and, especially, Jagger’s sneering background vocals.

I reformulate alternative possible endings to my story, imagining how I might have responded: In one version I reveal my newfound anger, speaking a “piece of my mind.” Alternatively, I see myself stopping my colleague and saying sarcastically, “I just want to thank you for all of your support and encouragement over the years” or, perhaps, “I couldn’t have done any of this without you.” These imagined responses provide personal emotional satisfaction. But, of course, I realize that such responses would have been wrongheaded and inappropriate. I did the right thing by doing nothing and saying nothing whatsoever.

The point of my story is not whether I should have responded differently. The point is that somehow the soundtrack of Simon and Jagger colored my thoughts, provoking a “personal” emotional response when I revisited the events of my faculty-meeting story. My subjective and private emotional response of anger and indignation, in turn, suggested possible alternative outcomes or endings to my story that had not occurred to me beforehand.

CRAFTING A ‘SOUNDTRACK’ FOR A TRIAL

I speculate that the narratives jurors construct in deliberations—and, specifically, the endings to trial stories that juries write in their verdicts and judgments—are often influenced by emotions that color and shape these proposed endings.

Here are two examples. The first provokes anger at those who act toward others in ways we as a people should not accept. The second is different: It evokes hope for what we might become.

Gerry Spence argues for punitive damages on behalf of the estate of Karen Silkwood against corporate defendant Kerr-McGee. Spence provokes jurors’ anger with the fervor and moral righteousness of an old-fashioned hellfire and brimstone preacher readying his congrega-tion for the oncoming battle against a villainous and powerful devil. Spence’s legal theory was that defendant Kerr-McGee is strictly liable for allowing the escape of ultrahazardous plutonium that poisoned Silkwood. There were no clear evidentiary answers at trial as to how Silkwood was poisoned by plutonium or whether Kerr-McGee had any responsibility for her death in a mysterious one-car accident. Nevertheless, Spence infuses his closing argument with righteous anger and moral outrage, and the jury at trial initially awarded Silkwood’s estate the $10 million in punitive damages Spence had demanded against Kerr-McGee:

“I’ve prosecuted murderers—eight years I was a prosecutor—and I prosecuted murderers and thieves … and I’ve sued careless corporations in my life, and I want to tell you that I have never seen a company who misrepresented to the workers that the workers were cheated out of their lives. These people that were in charge knew of plutonium. They knew what alpha particles did. They hid the facts, and they confused the facts, and they tried to confuse you, and they tried to cover it, and they tried to get you in the mud springs. You know and I know what it was all about. It was about a lousy $3.50-an-hour job. And if those people knew they were going to die from cancer 20 or 40 years later, would they have gone to work? The misrepresentations stole their lives. It’s sickening; it’s willful; it’s callous.”

Clarence Darrow’s mitigation closing argument to the court on behalf of the confessed murderers Nathan Leopold and Richard Loeb is at the opposite end of the spectrum of social emotions. This argument is nakedly suffused with the emotion of love and suggests the possibility of redemption—a plea for the sentencing judge to spare the lives of two boys who have committed premeditated murder—not just for the redemption of the lives of the two boys but also through an evocation of an alternative vision of the law’s possibilities:

“I am pleading for a time when hatred and cruelty will not control the hearts of men. … If I can succeed, my greatest reward and my greatest hope will be … that I have done something to help human understanding, to temper justice with mercy, to overcome hate with love.

“I was reading last night of the aspirations of the old Persian poet Omar Khayyam. It appealed to me as the highest that I can vision. I wish it was in my heart, and I wish it was in the hearts of all:

SETTING THE MOOD AT TRIAL

In the technical terms of language theory, a successful advocate’s storytelling at trial is a “perlocutionary act”: The lawyer asks the audience to take action and complete the story with a verdict that inscribes a coda of meaning upon the human affairs depicted in it.

What is not so clear is the role of social emotions in shaping the endings of these stories. Yet successful attorneys strategically provoke or evoke social emotions—not entirely unlike the way a movie soundtrack suggests what the audience should feel; or even the way the bitchy voice of Mick Jagger accompanying Carly Simon in the background of my thoughts about the faculty meeting informed the movie playing out on the internal screen of my imagination.

This article originally appeared in the October 2015 issue of the ABA Journal with this headline: “Soundtracks of our Lives: How social emotions can influence jury deliberations.”