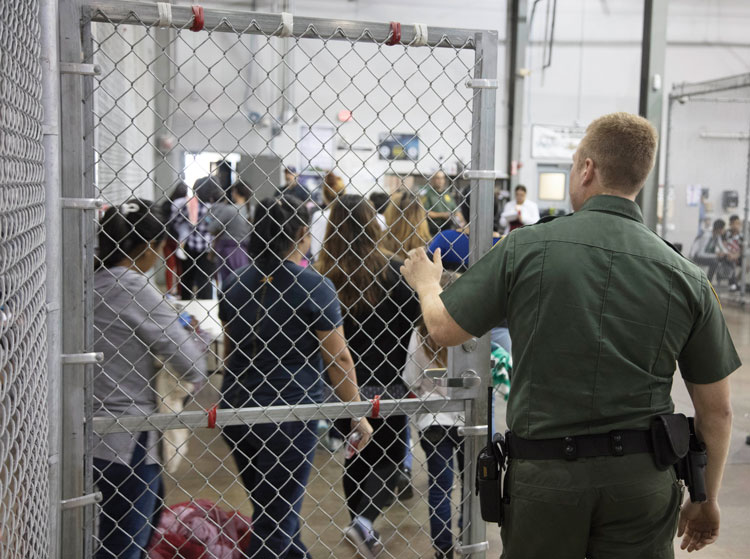 Intake of detainees a the Border Patrol’s processing center in McAllen on June 17. Photo courtesy of U.S. Customs and Border Protection.

The 9th U.S. Circuit Court of Appeals at San Francisco has ruled that these mass hearings violate due process, Meyers says, but the 5th Circuit at New Orleans, which includes South Texas, has not weighed in.

Bass witnessed a hearing in the McAllen, Texas, federal courthouse for the Southern District of Texas and saw 75 defendants plead guilty en masse. Each got only a few minutes with a public defender before their hearings, and all got time served—typically a couple of days in a CBP holding facility—before being remanded directly into an Immigration and Customs Enforcement detention center.

There, they’re put into expedited removal—deportation without a court hearing—unless they pass an interview that permits them to claim asylum. This means they don’t appear on immigration court dockets, which means ProBAR is not able to provide them with services unless they happen to call. “Many will be deported without ever seeing any attorney,” Jackson said.

Studies show that having a lawyer often makes a difference between success and failure in immigration court—and immigrants are not entitled to public defenders because being deportable is not a crime. The ABA has repeatedly called for court-appointed lawyers to be provided for immigration proceedings, passing res-olutions addressing minors in 2001 and 2015, and all immigrants in 2017.

The call for assistance is being answered by long-standing advocacy organizations, by newly formed groups such as Lawyer Moms of America, and by multiple entities within the ABA. The Section of Civil Rights and Social Justice has hosted a series of webinars examining the new DOJ policies. Immigration attorneys who have Spanish and indigenous language skills are a critical need in South Texas, so ProBAR is looking for more volunteers.

The association’s Working Group on Unaccompanied Minor Immigrants also has seen a marked increase in requests to do pro bono work for immigrant minors.

Cheryl Zalenski, director of the ABA Center for Pro Bono, says in the space of two weeks in June the working group received more than 50 sign-ups via the ABA’s Immigrant Child Advocacy Network without undertaking any publicity. Although the volunteers were unexpected, they’re very welcome, says Mary Ryan, who co-chairs the working group.

“There’s a crisis in our immigration system right now that’s challenging the ability of any immigrant, but particularly the children, from receiving the due process to which they’re entitled and to which of course the [ABA] is committed,” Ryan says. “Children going pro se through the immigration system is just not something that any lawyer should let happen.”

Unlike ProBAR, the working group and the Immigrant Child Advocacy Network don’t serve immigrant minors directly. Rather, Ryan says it connects volunteer lawyers to local organizations in their areas to help minors in the later stages of their immigration cases.

For those who can’t donate time, money is also welcome. The ABA’s charitable arm, the Fund for Justice and Education, supports more than 200 programs each year, including ProBAR, the Immigration Justice Project of San Diego and the Children’s Immigration Law Academy.

Lea Navarro Snipes, associate director of the FJE, says the nonprofit has received an “unprecedented” level of donations earmarked for ProBAR.

Find out how to donate time or money at bit.ly/ABAimmigration, and see coverage of the evolving responses to the immigration policy changes at ABAJournal.com/immigration.

This article was published in the August 2018 ABA Journal magazine with the title "Border Lines: ABA works to meet immigrants’ increased need for legal assistance and oppose family separations."