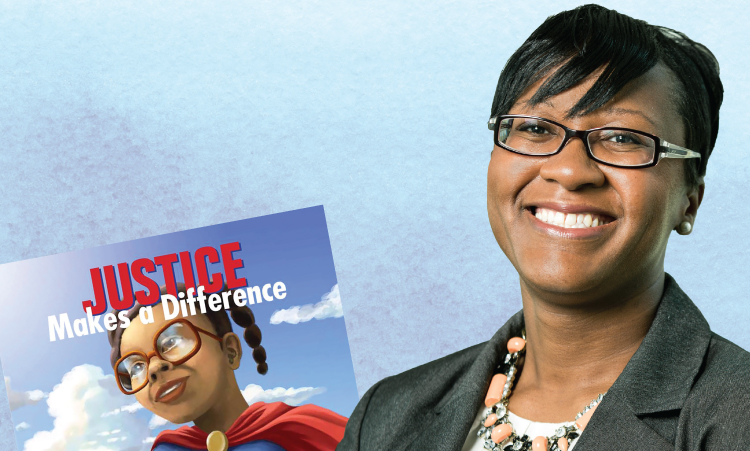 A trio of early influences led Artika Tyner to what she calls her life mission—promoting literacy, training the next generation of leaders and advancing diversity and inclusion as the founder of the Planting People Growing Justice Leadership Institute.

She grew up in Rondo, a historic neighborhood in St. Paul, Minnesota, that had a thriving African American community until the construction of Interstate 94 cut it in half in the 1960s. She saw families lose their homes and businesses shut down,  and she decided to become an attorney to fight for social justice.

Before Tyner found the law, she found education. She considered following in her favorite high school English teacher’s footsteps but was devastated when she realized there were racial disparities in the classroom. She wanted her work to include ensuring that all children have equal opportunities.

At the same time, she developed an interest in the criminal justice system. She recognized how the war on drugs affected her community through the 1970s, and she wanted to help address the problem of mass incarceration.

“Rondo was the training ground; the educational system was the passion that hit my heart; and the criminal justice system was just up close and personal to me,” Tyner says. “I saw the disproportionate impact on communities of color, disenfranchisement of folks and, basically, the creation of a new second-class citizenship.”

She had graduated from the University of St. Thomas School of Law in Minneapolis in 2006 and was working as the school’s associate vice president for diversity and inclusion when she sent a friend data about illiteracy rates in prison.

Through her work with the Community Justice Project, a civil rights clinic at the law school, she met clients with the same story: They learned how to read in prison. The data confirmed her suspicion, she says. Depending on the study, 60% to 80% of inmates were illiterate.

Tyner not only wanted her nonprofit to address the correlation between illiteracy and future incarceration, but also the lack of diversity in literature. As she launched the organization, she realized that only about 10% of books were written by authors of color or featured diverse characters, she says.

“How can we create an interest in reading and passion around reading and address some of these disparities unless people are able to see themselves in the books they are reading?” she asks.

She wrote her own children’s book and worked with a group of volunteers on a crowdfunding campaign to raise the $20,000 needed for the production process. She published Justice Makes a Difference: The Story of Miss Freedom Fighter, Esquire, a story about an 8-year-old girl named Justice who decides she isn’t too young to change her community. Inspired by civil rights leaders such as Ida B. Wells, Charles Hamilton Houston and Paul Robeson, Justice decides to become an attorney.

The book sales support Tyner’s nonprofit and its initiatives, including an annual leadership institute at Highland Park Senior High School, her alma mater. They have also made it possible for Tyner to donate more than 1,000 copies of Justice Makes a Difference to children around the world.

Tyner, a member of the ABA since 2006, coordinates with the Solo, Small Firm and General Practice Division to visit local schools during its meetings. As part of the pipeline initiative to support young leaders, she meets students, reads her book and donates copies.

She recently received photos of students reading her book in Houston and their responses to one of the questions she always poses: How will you lead change?

“To read their perspectives, and the things they wanted to do—and a few were inspired to be attorneys—was something that was my morning inspiration today,” she says.

People often jokingly ask Tyner when she finds time to sleep, and she answers easily. She is motivated by her faith, she says, and believes there is nothing too big for God. “When I read that data, it spoke to me,” she says. “In the end, it was a project larger than the team that was sitting at my table in the dining room, but it was something I believed was a mission and a calling for our lives.”

“We had to come together in that season and have enough space to say, although it looks impossible, we can do it.”

For Tyner, the work doesn’t even stop there.

She has taken the Planting People Growing Justice Leadership Institute abroad, making several trips to Ghana to meet with students and host youth leadership summits. She also partners with the Ghana Scholarship Fund and Book to Read Foundation, two other nonprofits that are committed to improving education and literacy.

Tyner made the connection through one of her students, Monica Habia, who was born in Ghana and wanted to study the role of its female leaders. When Habia received a fellowship in 2015, she asked Tyner to come as her program adviser.

Habia has continued to travel with Tyner to Ghana and also works with the Planting People Growing Justice Leadership Institute. She has been inspired by Tyner’s genuine concern for children and how the law shapes both education and the criminal justice system.

“We have people who just talk, talk, talk and don’t really show the way,” Habia says. “For her, she is concerned about the issues and also goes a step further to see what we can do.”

Tyner, who is also a member of the ABA Rule of Law Initiative’s Africa Law Initiative Council, regularly travels with other students and community members to Ghana. She hopes to expand the youth leadership summit and take it to other parts of the world in the future.

She also plans to release an activity book and teaching curriculum for Justice Makes a Difference so more schools can teach its lessons to students on their own.

She has written and published other books, including Amazing Africa: A to Z, with Habia, and Joey and Grandpa Johnson’s Day in Rondo. She has also partnered with the ABA to publish The Lawyer as Leader: How to Plant People and Grow Justice and The Leader’s Journey: A Guide to Discovering the Leader Within.

Earlier this year, Tyner became the director of the new Center on Race, Leadership and Social Justice at the University of St. Thomas School of Law.

Armed with not only her law degree but also a master’s degree in public policy and leadership and a doctorate in leadership, she hopes to convene a national collective of thought leaders on education and criminal justice at the center.

“My vision is training the next generation of social engineers,” Tyner says. “These are lawyers who are able to use their law degree to make an impact for social justice but also to deal with some of the most critical issues of our time.

“How can you use the critical thinking skills and analytical skills that we have to leave the world a better place?”