When things go wrong, immigrants serving in the military look to Margaret Stock 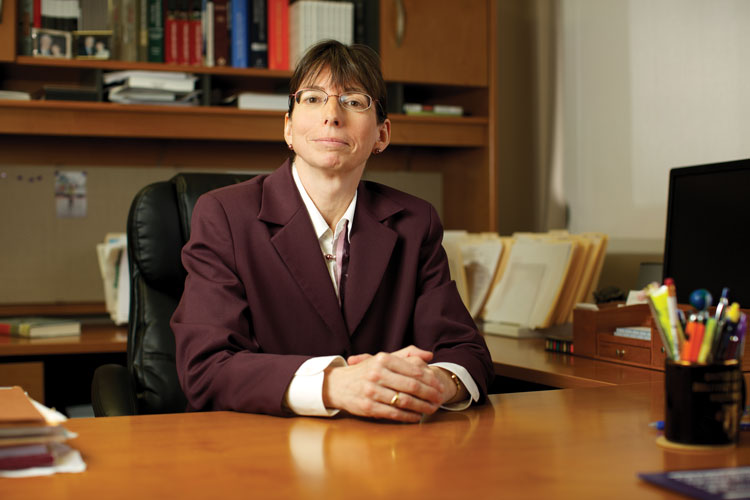 When Margaret Stock first received the Pentagon’s September 2016 memo, she thought someone had made an amateur mistake.

“I’m an attorney, and I taught constitutional law, so I obviously recognized immediately [that], hey, somebody at the Pentagon didn’t do their job; they’re putting out an unconstitutional memo,” Stock says.

But it wasn’t an error. The memo essentially shut down the Military Accessions Vital to the National Interest program, which recruited immigrants with certain highly desired skills. The program had more than 10,000 participants, and the memo ordered extra background checks on all of them. To Stock’s eye, the implication was that noncitizens posed a threat to national security. She thought that was ludicrous and obvious national-origin discrimination.

But until the checks were completed—and Stock says the military had no capacity to complete them—the recruits were grounded, ineligible for orders even to basic training. Furthermore, the memo said MAVNIs, as people enlisted through the program are known, were ineligible to be officers for six to eight years. Because all doctors are officers, that instantly eliminated all the doctors the program had intentionally recruited. Individual services were welcome to continue MAVNI but only after meeting requirements that Stock says were impossible to meet.

Word got around, and soon messages started coming in from MAVNIs to Stock’s Anchorage, Alaska, law firm, Cascadia Cross-Border Law. They still come in, and Stock is doing what she can to help.

“It’s been just a flood of people with problems calling me,” she says. “People in America would be appalled if they knew what the Pentagon was doing.”

SERVICE TO THE COUNTRY

If Stock seems passionate about MAVNI, that might be because she helped create it. For 28 years, she balanced her career as an immigration lawyer with another as a soldier in the U.S. Army Reserve, retiring as a lieutenant colonel when she reached the statutory maximum service. As an immigration lawyer, she’s served on the ABA Commission on Immigration (and served as a state co-chair for the American Bar Foundation Fellows); spoken at ABA meetings; and created the American Immigration Lawyers Association Military Assistance Program, which connects military families to pro bono immigration lawyers.

As a soldier, Stock says she “had an exciting time for 28 years” deploying to Japan, Korea and around the United States. The Army was what brought her to Anchorage, where she was stationed at Fort Richardson in the mid-1980s. It also gave her the flexibility to earn graduate degrees from Harvard University and the U.S. Army War College and later teach at the U.S. Military Academy at West Point, New York. She’s been vocal about her belief that immigrants benefit the military.

That may be why, in 2006, Sen. John McCain, who died last year, called Stock and asked her to testify before the Senate about recruiting more immigrants to the military. Soon, she was ordered to active duty to help create a program for recruiting immigrants with vital skills—medical skills and certain languages—who the military was having a hard time finding through ordinary recruitment. In exchange for their service, these recruits would be able to jump to the front of the line for naturalized citizenship.

Initially, MAVNI seemed successful; it was approved under then-President George W. Bush and implemented under former President Barack Obama. When Stock hit her statutorily required retirement date in 2010, the government kept calling for advice. But Naomi Verdugo, who worked with Stock on MAVNI before her own retirement, says certain people at the Pentagon didn’t trust the foreign-born, and they kept adding more screenings.

“It seems like an appetite that can never be satisfied,” Verdugo says. “Eventually the program becomes nonviable.”

That moment came with the memo, issued just before the 2016 election. Stock quickly sent out an email.

“The memo has created complete chaos within the Army,” she wrote. “Many will be ‘painting rocks’ on various bases around the U.S. for the next six months or longer.”

Indeed, the background checks were so slow that the military eventually canceled some enlistments for failure to pass a background check. Other people had their contracts canceled for no clear reason, or they were told they failed for spurious reasons. One told Stock he’d failed his check because he was working with her, which the military said was a sign that he had no allegiance to the United States.

This had consequences beyond colorful rocks. Some MAVNIs’ visas expired while they waited, giving them a choice between living in the United States without legal permission and leaving the country. But because swearing allegiance to the United States—as joining the military requires—is a death sentence in some countries, everyone couldn’t simply go home. Stock knows of 20 or 30 who fled to Canada, which favors young immigrants with fluent English and college degrees.

That’s exactly the kind of person the U.S. military should want, Stock says. The Army is already bending standards because it can’t meet its recruiting goals.

“The net result of the Pentagon imposing these anti-immigrant rules is that they’re going to have to recruit more unqualified U.S. citizens,” she says. “So we are going to have a weaker military because we are refusing to recruit people who are talented immigrants.”

NORTH TO THE FUTURE

More than two years after that 2016 memo, Stock is still getting messages daily.

As a result, she’s become a kind of a hub for MAVNIs seeking legal representation. She can’t do it all herself—her office has six attorneys, and she could use more—so she’s been recruiting lawyers all over the country to help. There are at least five pending class actions related to MAVNI, she says, mostly backed by large law firms. If she can’t fit callers into one of those, or find them another lawyer, she takes it herself. One case she convinced her husband—an experienced civil litigator but not an immigration lawyer—to take it on.

“I think that’s pretty incredible that she has taken it upon herself, and it really is largely herself, to get their careers back on track or get their clearances or help with these lawsuits,” she says.

Stock’s husband, Neil O’Donnell, is one reason she’s still in Alaska. They met mountain climbing—in a snowstorm—and she says they still enjoy the outdoors, which the state provides in abundance. Stock notes that there’s also plenty of immigration law work.

“We could use four or five more attorneys, frankly,” she says. “[There are] not enough people for the people who need pro bono help, so we do a substantial amount of pro bono work.”

In fact, Stock has recently ended a stint of doing nothing but pro bono work. In 2013, she was a recipient of a “genius grant” when she was announced as a MacArthur fellow for her work on immigration and national security. That came with five years of funding, which enabled her to take meritorious cases without worrying about her legal fees. She also spoke around the country about her belief that immigrants are a boon, not a threat, to national security.

The grant ended this past fall, but Stock still wants to get that message out. She believes this is a dishonorable period in American history, like the World War II-era discrimination against Japanese-Americans. As then, she says, she thinks it’s fueled by fear.

“I think that’s what’s going on at the Pentagon right now, they are terrified of foreigners, and so they’re doing things that actually hurt our nation’s military,” she says. “And I think we’ll overcome that eventually. We’ll have to. If we don’t, we’re not going to be a superpower anymore.”

Members Who Inspire is an ABA Journal series profiling exceptional ABA members. If you know members who do unique and important work, you can nominate them for this series by emailing [email protected]. This article was published in the January-February 2019 ABA Journal magazine with the title "No Summer Soldier."