It's difficult to describe lawyers' situation in Puerto Rico, but hurricanes' damage was 'extreme'

By José L. González and Laura A. Miguel 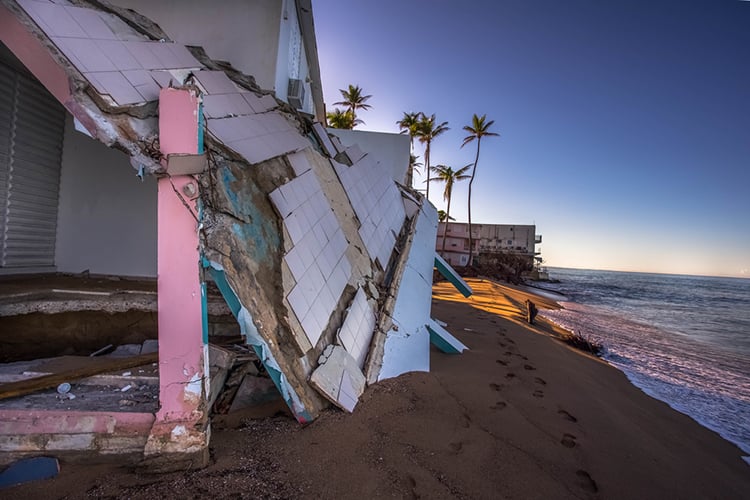 It is difficult to provide a general description of today’s working and business conditions that lawyers practicing in Puerto Rico are facing in the aftermath of hurricanes Irma and Maria, which struck the island in September. There are several factors that contribute to this difficulty, beginning with the lack of a thorough assessment of the present working conditions of attorneys practicing here. Moreover, we are not aware of any survey to determine damages caused by the hurricanes to lawyers at a personal level.

But the extent of the damage the hurricanes caused to the island’s infrastructure was extreme.

The most significant damage was to the electric power grid, which collapsed almost completely. Our office is located in a sector of San Juan that received certain priority in re-establishing the electricity service, but we were without power for seven weeks. We endured almost four months without power in our house.

Even at present, more than four months after the storms hit, according to figures disclosed to the press by the Puerto Rico Electric Power Authority, more than one-third of the population does not have electrical service.

The impact of the hurricanes over the island was not uniform, with some areas suffering extreme devastation. There was greater havoc in the eastern and central parts of the island, so many lawyers in those communities are still without power in their offices. Even in San Juan, where damage to structures was less severe, many lawyers commented in the hurricanes’ aftermath that many legal offices were ravaged. Outside San Juan, such stories are more frequent.

Although significant progress has been made re-establishing electricity service to several sectors by PREPA (the state-owned utility that provides electricity to the whole island), the U.S. Army Corps of Engineers and several stateside utilities that have supported the recovery efforts, there is no reliable measure of the number of businesses and households that remain without power because the information system used for such purposes also collapsed.

There are also significant differences in the types of legal offices and practices in the different towns on the island. Even though Puerto Rico is a small island (3,500 square miles), the practice of law is not homogeneous. The type of practice, proportion of employed attorneys, working relationship with the state and local governments, number of attorneys per legal structure, type of professional fees arrangement, income level, and many other elements of a legal practice differ enormously between the San Juan greater metropolitan area (which has approximately 20 percent of the island’s population of 3.4 million) and other parts of Puerto Rico.

Furthermore, recovery efforts are not being accomplished uniformly—particularly with regard to the recovery of electric power service. This has resulted in geographical disparities in getting legal offices back on track. Other disparities arise out of the acquisition of private insurance, which differs widely. From conversations with our colleagues, it seems that not many legal offices carried business interruption coverage. In those cases, the most common aid they are receiving is access to recovery loans.

It is not possible to determine how many legal offices remain closed because of lack of electric power, how many are operating on a limited schedule because of the increased cost associated with the use of diesel power generators, or how many have had to lay off personnel because of the reduction in the demand for legal services. Indeed, even without a formal assessment of the hurricanes’ effect on the legal market, it seems from our personal observation that there has been a reduction in the demand for legal services at almost every level, arising out of diminished economic activity in the private and public sectors, and the exodus caused by the devastation. This may be the most significant effect because of its expected long duration.

Any assessment of the hurricanes on the working conditions of lawyers, and further consequences on certain sectors of the society that may be more affected by a shrinking market for legal services, should also consider the pre-existing economic and financial realities of the island.

Puerto Rico has been suffering from more than 10 years of stagnation. That, coupled with the public debt crisis, has resulted in terrible economic depression. This reality is widely recognized on the island and in Congress, and it is shown in the publications and submissions to Congress while its members were debating the Puerto Rico Oversight, Management, and Economic Stability Act. Promesa, which Congress enacted in 2016, allowed the Puerto Rico central government, its units and public corporations to file for bankruptcy under the supervision of an oversight board. For example, PREPA had already filed for bankruptcy before the hurricanes hit.

Thus, with the exception of specialized legal services in connection with the management of financial disputes—which are being handled by a reduced number of stateside large law firms and a few midsize law firms from Puerto Rico—the general experience shared among local lawyers we’ve spoken to is that the demand for legal services has decreased significantly.

Given this backdrop, it is difficult to advocate for specific actions to assist fellow Puerto Rican lawyers to recover from their present condition. Although the emergency has ameliorated, there are lawyers on the island who are still suffering the direct consequences of the devastation. But there is a hodgepodge of potential actions that may be adopted by interested groups:

• Help for those who want to relocate—temporarily or permanently—to other jurisdictions, including guidance about the areas of practice that offer better opportunities.

• Opportunities for Puerto Rican lawyers to provide stateside U.S. law firms with legal support services that may be done remotely from Puerto Rico by bilingual attorneys, like document review and translations to Spanish.

• Funds to compensate Puerto Rican attorneys who are able to assist needy populations with legal services.

• Development and application of a tool to assess the actual working and business conditions of lawyers practicing in Puerto Rico, including their level of unemployment or underemployment. This tool should be sensitive to geographical differences, and gender and age groups.

Basically, Puerto Rican lawyers need work and clients to keep moving, to not quit the profession, to not move from the island and to keep running the economy. Otherwise, the island will keep suffering the exodus of attorneys.

José L. González and Laura A. Miguel are attorneys in the González Castener law firm in San Juan, Puerto Rico.