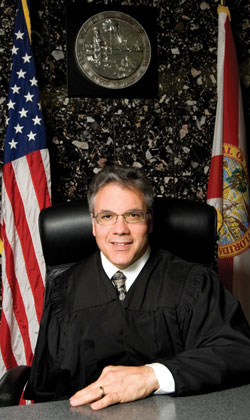 He has no legs and no right arm, yet despite his disabilities—or perhaps because of them—Judge August Bonavita decided to play to his strengths. “My father always told me you’re going to have to use your mind; he drove home that education was the only option,” says Bonavita, 47, who was appointed in 2009 to fill a vacancy on the Palm Beach County Court in Florida.

The ABA Commission on Mental and Physical Disability Law, citing 2005 U.S. Census Bureau figures, estimates nearly one in five Americans lives with a disability. Of the 54.4 million Americans with disabilities, 6.5 million have a severe disability.

Yet for a variety of reasons—some economic, some social—few disabled people seek careers in law. The commission’s 2010 Goal III Report (PDF) on the status of lawyers with disabilities found that while 19 percent of the people in this country are disabled, only 3.8 percent of them work in a law-related field. The U.S. Bureau of Labor Statistics maintains the figure could be as low as 2.6 percent as of the third quarter of 2009.

Bonavita hopes his story spurs others with disabilities to consider careers in law. “There are a lot of things you can do with law. That’s one of the reasons why I chose the law.”

He earned his law degree from Seton Hall in 1992. After a judicial clerkship, he went into private practice in New Jersey for four years, leaving in 1997 to become an assistant public defender in Tampa.

Two years later he became a state assistant attorney general based in West Palm Beach, where he met Charlie Crist, who became Florida attorney general in 2002. Crist, who became governor in 2007, remembered Bonavita’s 12 years of public service when the state Judicial Nominating Committee forwarded Bonavita’s name in 2009 for the 15th Judicial Circuit vacancy. In 2010 he won a full six-year term on the court after his competitor dropped out of the judicial elections.

In addition to his duties as judge, Bonavita teaches law at Palm Beach Community College. While in New Jersey, he also taught at a community college where he met his wife, Laura, who was one of his students. They have an 11-year-old daughter, Julia.

Bonavita got interested in the law when he was just 8 years old; that’s also when a horrendous accident cost him his limbs.

On March 27, 1972, he was just a third-grader building a fort with two friends behind the bowling alley near his home in Carteret, N.J. The enclosure around the electrical transformers that powered the bowling alley had rusted away, enabling the boys to slip inside. But he tripped and reached out to break his fall, his right hand clamping onto an exposed wire connected to the transformer. He couldn’t let go as 13,000 volts (more than five times the highest voltage used in an electric chair) coursed through his right arm, cooking it from the inside out. The arcing electricity also caused a small fire.

One of the boys with him ran home in terror; the other ran for help. A man at the bowling alley saved Bonavita’s life by bodily heaving him from the wire. Doctors ultimately amputated his arm at the shoulder and both legs, badly burned, above the knee.

“They started with my feet and hand and tried to save as much as they could,” he says. But that was the least of his worries. “They didn’t think I was going to live. They brought in a priest who read me the last rites.”

In desperation, his mother sprinkled holy water from Lourdes around his hospital room. “Two or three days later, I was sitting up in bed, asking for something to eat,” Bona vita says.

Bonavita never let his disability define him. It never occurred to him that he wouldn’t continue to attend public school (though he was the only student there in a wheelchair), go to college, get married and start a family.

In the ensuing years, he would become fascinated with the law, in part due to the lawsuit filed on his behalf and settled with the power company.