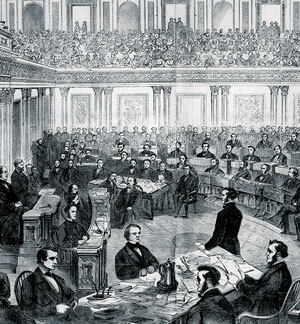 The Senate acted as a court of impeachment for President Andrew Johnson. Photograph Courtesy of the Library of Congress.

After the assassination of Abraham Lincoln, the burden of rehabilitating a war-ravaged nation fell on Andrew Johnson. Though a Southern Democrat, Johnson had been tapped as Lincoln's running mate in the critical election of 1864 because of his allegiance to the Union; now, as president, Johnson found himself caught between a retributive-leaning Republican Congress and his own desire to ease the former Confederate states quickly back into the Union.

A former governor of Tennessee, Johnson’s views were complicated and evolving. He had no particular enmity toward slavery as an institution, but he understood and resented its continuing threat to the Union. “I am for my government, with or without slavery,” Johnson explained at one point, “but if either the government or slavery must perish, I say give me the government and let the negroes go.”

Radical Republicans wanted to remake governmental institutions in the South, while Johnson sought to restore them sans slavery, arguing that no effective government could be reconstructed with 11 of the 36 antebellum states absent from Congress. Misreading their failure to override a veto, Johnson began to use his executive office to mold his own “presidential reconstruction.”

Employing powers of proclamation and pardon, Johnson moved state by state, requiring each returning rebel state to create a state constitution repudiating slavery and a new legislature to ratify the 13th Amendment. The strategy was effective. Of the first 27 states required for ratification, seven were from the former Confederacy. But in doing so, Johnson had allowed former Confederates to vote and hold public office, effectively restoring white-dominated state governments that were free to obstruct black enfranchisement.

Reconstituted and recalcitrant, state legislatures responded with “black codes” erecting fresh legal barriers to any social and political integration of newly freed slaves. Their harshness sparked anger in Congress, as well as several spectacular acts of violence. In Memphis, 46 were killed when whites scuffled with former black soldiers. And in New Orleans, nearly 40 were killed when a white mob attacked a black suffrage gathering.

Republicans moved to repeal Johnson’s Reconstruction. They reauthorized the Freedmen’s Bureau, a military presence protecting newly freed slaves, and passed the Civil Rights Act of 1866. And in a move to institutionalize universal male suffrage, Congress proposed a 14th constitutional amendment requiring each state to afford the same rights for its citizens as those enjoyed under federal law.

But even in the North the measure was not universally popular. Although approval required ratification by 27 state legislatures, by the end of January 1867 only 17 states had voted to approve.

Emboldened with a veto-proof Congress by the election of 1866, Congress passed the Reconstruction Act of 1867, placing 10 of the provisional state governments into five military districts. The aim was to enfranchise former slaves, disenfranchise former Confederates and force Southern states to pass the 14th Amendment, even “at the point of a bayonet,” in the words of one embittered Republican.

The measure worked. While Tennessee had been one of the first states to ratify the amendment, when it finally passed it was with the help of five more Southern states. On July 20, 1868, Secretary of State William H. Seward declared the amendment ratified.

Meanwhile, the bitter constitutional struggle between Johnson and the legislature had already reached its zenith when Johnson had tried to remove the immensely popular Edwin Stanton as secretary of war. When impeachment was threatened, Johnson replied: “Let them impeach and be damned.” And in February 1868, Congress voted to do just that.

The Senate trial resulted in an acquittal. Johnson retained his office by a single vote. But the bitterness over two visions of Reconstruction endured for the next century, and the debate over the role of states’ rights in the republic is still in play in the nation’s courts.