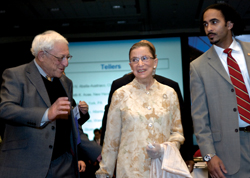 Justice Ruth Bader Ginsburg, appearing before the ABA House of Delegates, called for a return to the less contentious U.S. Supreme Court confirmations that she experienced 17 years ago. “May the Senate one day return to the collegial and bipartisan spirit that Justice [Stephen G.] Breyer and I had the good fortune to experience,” she said. Ginsburg was awarded the ABA Medal, the association’s highest honor, at the 2010 ABA Annual Meeting.

“Without ABA support, I do not believe I would hold the good job I have today,” she told members of the House. When nominated to the U.S. Court of Appeals for the District of Columbia Circuit in 1980 by President Jimmy Carter, she received the ABA’s highest rating.

“That rating made me invulnerable to attack as unqualified for the appointment,” she said.

Ginsburg was involved in several ABA leadership posts before she joined the bench. She became a member of the ABA Journal Board of Editors in 1972—the same year she joined the faculty of Columbia Law School. In 1978, she traveled with a 12-person ABA delegation on a visit to China at a time when the country was only just opening to outsiders.

ABA leaders determined “it would not do to present as representatives of the association only white men of a certain age,” she recalled. Her diary of the trip was published by the ABA Journal in October 1978.

“I have lived long enough to see great changes in our profession, and I appreciate beyond reckoning” the ABA award, she said. She is the fourth woman to receive the honor. The others were Shirley M. Hufstedler, a former U.S. secretary of education and appellate court judge in both the state and federal systems; retired Justice Sandra Day O’Connor; and Patricia M. Wald, former chief judge of the U.S. Court of Appeals for the District of Columbia Circuit.

Ginsburg was appointed to the Supreme Court in 1993 after 13 years on the D.C. Circuit. She was a professor at Columbia Law School and at Rutgers School of Law at Newark. As general counsel for the American Civil Liberties Union, Ginsburg argued six cases before the Supreme Court.

When she graduated from Columbia Law School in 1959, a Supreme Court justice refused to interview her for a clerkship because she was a woman, despite a glowing recommendation from the dean of Harvard Law School.