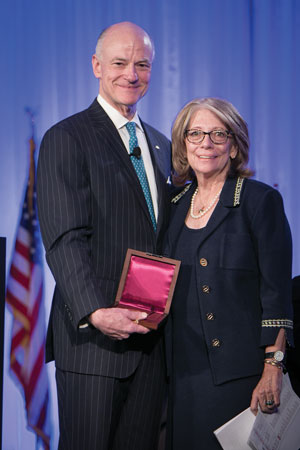 William Hubbard opened his last presidential speech to the ABA House of Delegates by contrasting the association’s Magna Carta festivities on June 15 with the tragedy in Charleston, South Carolina, days later, in which an avowed white supremacist killed nine people meeting for Bible study at an African-American church.

The outgoing ABA president recalled getting a phone call from NAACP Legal Defense and Educational Fund President Sherrilyn Ifill at 6 o’clock the next morning breaking the news.

“It was the antithesis of the glory of the preceding days,” he said.

Hubbard, a partner at Nelson Mullins Riley & Scarborough in Charleston, had known the Rev. Clementa Pinckney, one of the victims. He emphasized Pinckney’s belief in the law as an instrument of justice, and he called on the legal profession to continue as leaders in seeking justice.

Hubbard went on to outline the ABA’s leadership role on several issues in the past year, including the interrelated issues of racism in the justice system, sentencing reform and reform of collateral consequences—noncriminal consequences of a conviction, which can make it harder for former prisoners to re-enter society.

Hubbard noted that while his presidency experienced setbacks, like the shootings, it also saw victories. This was the year that the Confederate flag over the South Carolina statehouse—visible from his office—came down, he noted.

Before thanking the ABA and various individuals for the privilege of serving, Hubbard quoted Alana Simmons, granddaughter of Charleston victim Daniel Simmons.

This article originally appeared in the October 2015 issue of the ABA Journal with this headline: “‘Justice Is Our Calling’: Outgoing ABA President Hubbard remembers Charleston slayings.”