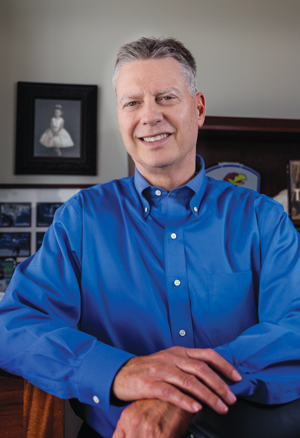 It was a lawyer who captured the first flag from Confederate soil brought to the White House. He was one of 46 attorneys who in April 1861 traveled from the Great Plains to Washington, D.C., where they protected President Abraham Lincoln at a time when most of the troops were out West fighting Indians—and those left in the capital either didn’t shoot well or had Southern connections and couldn’t be trusted.

James Muehlberger, a Shook, Hardy & Bacon partner, found the group’s muster roll while on a three-month sabbatical from his work as co-chair of the firm’s practice in class actions and complex litigation. He wrote The 116: The True Story of Abraham Lincoln’s Lost Guard, a book about the men known as the Frontier Guard. They were led by Jim Lane, a lawyer and former U.S. senator who settled in Kansas territory. The book was published by the ABA’s Ankerwycke imprint.

Muehlberger is also the author of The Lost Cause, about Henry McDougal. A founder of Muehlberger’s firm, McDougal brought and won an 1870 Missouri civil lawsuit against outlaw brothers Jesse and Frank James regarding a stolen horse.

“In some ways, writing books may have made my legal writing better,” Muehlberger says. “It’s taught me [how to] tell a story in a conversational and interesting way—one of those things we try to teach younger lawyers about their legal writing.”

While on his first sabbatical in 2007, Muehlberger found the James brothers’ court record at the Daviess County clerk’s office in Missouri. As a Shook Hardy partner, he can take a three-month sabbatical every six years. He doesn’t know of other law firms with similar offerings.

“I think it helps us retain lawyers; people really enjoy it. We’ve always been a very hardworking trial firm,” he says. “This is high-pressure stuff, and a sabbatical helps our lawyers re-energize and refocus.”

Much of his first sabbatical centered on researching post-Civil War history around the Missouri-Kansas border, where many Confederate sympathizers supported the James brothers. That work led to Muehlberger’s discovery of Lane, who besides being a lawyer had successfully fought off pro-slavery soldiers in the area. Lane met Lincoln when the president traveled there.

Kansas had achieved statehood in January 1861, only four months before the Civil War began. “Lincoln asked Lane what he should do,” Muehlberger says, “and Lane said, ‘Get loyal men in the White House.’”

The Frontier Guard was composed of 116 men, whom Muehlberger read about in a long-forgotten muster roll he found at the U.S. Library of Congress. A vellum-bound book that’s about 7 by 8.5 inches, it includes the men’s names and ages written in quill pen, along with descriptions of daily activities. A historical researcher from Kansas helped Muehlberger piece together their biographies and a timeline of the activities.

Out of the group of lawyers, many had experience fighting pro-slavery soldiers, and Muehlberger suspects a few may have practiced law with Lincoln in Illinois.

Some of the lawyers were East Coast abolitionists who went to the Kansas-Missouri border as anti-slavery activists. Others didn’t go to law school, but passed a bar exam and went to the Kansas territory because there was money to be made from legal work on land sales and title disputes.

It was a pairing Ivy League-educated lawyers who did civil rights impact litigation with attorneys who put themselves through a part-time program and built state court practices representing individuals and small-business owners. Court appearances for the self-taught lawyers were often reached by horseback after traveling long distances through the wilderness. Knowing how to shoot and ride was necessary for survival.

“Lane was able to bring these two groups together,” says Muehlberger. “Some had money to buy guns, and the others actually knew how to use guns. Many of these guys knew how to handle a pistol as readily as a pen.”

A SHOW OF FORCE

When the Frontier Guard got to Washington on April 18, they set up in the White House’s East Room. The Secret Service, the FBI and the CIA didn’t exist, and the men feared that the Confederates would storm the capital and kill Lincoln.

Lane positioned sharpshooters on the White House roof with buffalo rifles, large-caliber weapons that could shoot huge holes through almost anything.

In a town known for rumors, Lane started one about having hundreds of men fighting for him. None of the group wore uniforms, and people couldn’t spot them to count them. On their first night in town, the men marched noisily back and forth across the Potomac River’s Long Bridge so their numbers looked to be in the thousands.

After hearing word that the opposition was gathering in Falls Church, Virginia, 9 miles outside Washington, D.C., and preparing to ambush the White House, Lane and his men marched there on April 23 and attacked. The Confederate troops scattered and left behind their flag, which Lane took to the White House. A Confederate officer had told Gen. Robert E. Lee that Lane had 12,000 troops.

“Their legal training had to come into play,” Muehlberger says.

“What lawyers do is figure out problems and create narratives,” he says. “Lane had to figure out how he could create a force, and he was a problem solver.”

Editor's note: After the October ABA Journal was published, author James Muehlberger said he found 48 names on the Frontier Guard roster that he lists as lawyers. “One or two of the 48 were judges,” he said by email, “but I could find no record of their admission to the bar, so I’ve included those two as lawyers. Perhaps it would be more accurate to say that 48 were lawyers or judges.”