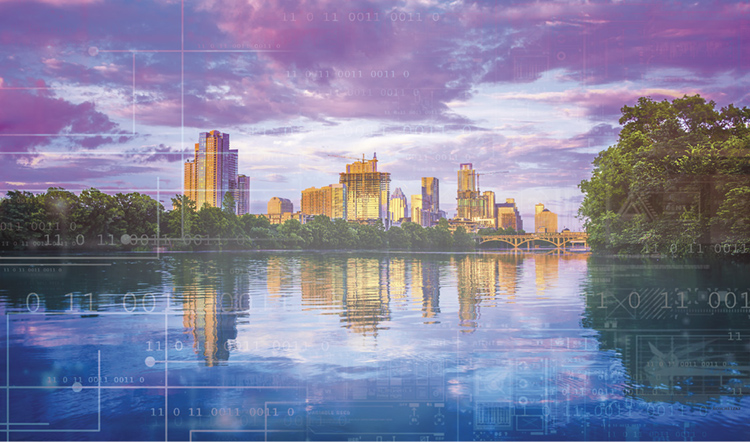 The corporate partner with Perkins Coie had spent most of her career in the firm’s Silicon Valley office and believed the Lone Star State’s capital city couldn’t support her practice, which specializes in advising emerging growth companies, investment banks and venture capital firms.

But things started to change. Austin had become a vibrant and mature tech hub—so much so that Perkins Coie in February 2020, seeing “significant strategic opportunities in Texas as Austin and Dallas continue to grow as business centers for startups, medium-size companies and large global corporations,” opened an office in Austin. This February, it moved into an 18,000-square-foot space after signing a multiyear lease in June.

In November 2021, Hintz decided to make the move she thought she never would. “Before, it was really hard to do my practice here, and now it’s not,” Hintz says. Also, the COVID-19 pandemic has changed how companies and lawyers work; they don’t have to be in Silicon Valley anymore. “Silicon Valley is a mecca, but I don’t think it’s the only one,” she says.

Hintz is one of dozens of lawyers who have joined BigLaw and boutique firms in Austin in the last year. In 2021, Austin led the country with the most law office openings in the United States with 16 new offices. It was followed by Los Angeles and New York City, each with 13, and San Francisco with 10, according to Leopard Solutions, a New York City-based business intelligence firm.

The booming tech scene is leading to an expansion of BigLaw in the Austin market. Kirkland & Ellis made the biggest splash, opening an office in April 2021 with approximately 24 lawyers. Gunderson Dettmer Stough Villeneuve Franklin & Hachigian came the same month, starting out with two lawyers, but it has since expanded to 10 attorneys, according to Wesley C. Watts, founding partner of the Austin office. One large firm that has made the move is Quinn, Emanuel, Urquhart & Sullivan, which opened its Austin office in January 2021 with four partners. O’Melveny & Myers opened in June 2021 with three partners and one senior counsel, the same month as Latham & Watkins opened with three partners.

The law firms are attracted to Texas’ favorable business climate, lack of a state income tax and lower cost of doing business than California, says Amber Gunst, CEO of the Austin Technology Council. The firms also are following their clients to Austin. In late 2020, Oracle announced it would move its corporate headquarters to the city. Tesla followed suit in 2021, and major tech companies Apple, Amazon, Google, Meta Platforms (Facebook) and Samsung also have announced expansions in Austin with large campuses.

Many of the law firms moving to Austin are chasing talent and money, says Kent Zimmermann, a strategic advisor to law firms at Zeughauser Group. Recently, several law firms have also opened offices in Salt Lake City, Miami and Nashville, Tennessee, which also have seen a huge influx of venture capital, he says. Austin is part of a larger trend of firms growing in secondary markets. “High-quality lawyers want to live in those places,” he adds.

On top of that, merger and acquisition activity is at an all-time high in the U.S., and all those deals need lawyers to advise on them. (See “Red-hot,” December-January, page 22.) Zimmermann notes that the demand is outstripping the supply, and the price of lawyers is going up. He says the growth in Austin is related to this transactional boom, as firms are having to pay more and look in more cities for talent nationwide.

Austin also has the cool factor and the “Keep Austin Weird” vibe going for it. For the past decade, Austin ranked as the nation’s fastest-growing metropolitan area, growing 33% from 1.7 million people in 2010 to 2.3 million people in 2020, according to the Austin Chamber of Commerce’s analysis of 2020 census numbers.

In the past, Austin’s legal work focused on the University of Texas and state agency work, but it has evolved to include technology-focused businesses with large legal departments and outside counsel with teams supporting them, according to Momentum Search Partners, a legal recruiting firm based in the city.

“All deals are getting bigger,” says José Ancer, a partner at Egan Nelson, an Austin boutique law firm with 40 attorneys. “It’s not so much Silicon Valley discovered Austin; it’s like everyone else discovered tech. Over time, the attractive returns of the venture capital world put that category on the radar of a much broader group of people. You’ve seen an explosion across the country of venture funds.”

In 2021, Austin-area companies raised a record-breaking $4.9 billion in venture capital in 387 deals, more than double the $2.3 billion raised in 2020, according to Pitchbook-National Venture Capital Association Venture Monitor data. And one of Austin’s largest initial public offerings in 2021 was Disco, a legal tech software company founded by lawyer Kiwi Camara. Disco went public in July at a $2.3 billion valuation. The company, which was founded in Houston and moved to Austin, makes artificial intelligence-driven software that helps law firms in e-discovery.

Gunderson Dettmer’s Watts, who is a native of Austin and has spent his career practicing law in the city, says Austin’s growth in the technology industry started in the 1990s but has accelerated greatly in the past few years.

“Austin is a place with a lot of natural beauty. The cult of entrepreneurship and creativity is part of that as well,” Watts says. That’s attractive to Gunderson’s clients, and Gunderson’s vision has always been to grow where its clients are, he adds.

As more venture funds and tech companies want to establish a presence in Austin, it benefits everyone, according to Watts.

“Indigenous talent with financing resources and deep rosters of executives and leadership, it kind of creates this whole ecosystem and cycle of growth and collaboration,” he says.

Perkins Coie started in Austin with patent litigation and emerging markets. It has since expanded into venture capital, technology transaction and health care, says Jose Villarreal, managing partner of the firm’s Austin office. Today, the office has 20 lawyers and 16 professional staff, and it continues to expand.

“The momentum Austin has is quite significant,” Villarreal says. “Austin was always known as a tech place. Five or so years ago, we crossed a threshold where there is so much tech talent and so much VC capital, the ecosystem just matured. It matured into an adult that is very active, vigorous. The venture capitalists are looking at Austin as a mature market, and that’s going to carry Austin forward.”