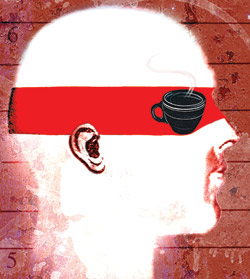 On the morning of Dec. 7, 2009, Daniel Noble went to his usual Starbucks coffee shop in Moscow, Idaho, wearing only pajamas and flip-flops, without his wallet or cellphone, and ordered two 16-ounce double-shot drinks. After downing them, the 31-year-old financial consultant drove to meet his wife, who worked across the state border at Washington State University.

On his way, he struck two college students and fled the scene. The police chased and captured Noble after a scuffle that ended with an officer using a Taser on him. He was charged with vehicular assault, hit-and-run driving and resisting arrest.

He was also taken to the hospital—where Noble’s family convened, along with defense attorney Mark Moorer of Moscow, to puzzle over the morning’s events. “He was a mainstream, strait-laced, no-record, no-problem type of guy who one day flipped the switch,” Moorer says of his client.

While at the hospital Moorer, a former prosecutor, learned from the local district attorney that the same Starbucks employee who had served Noble that morning—on credit, given that he didn’t have any money—saw news of the arrest on TV and had volunteered to share any information he had.

Moorer says that information lingered in everyone’s mind as they tried to figure out what Noble could have been thinking that day. Noble remained hospitalized for almost three months, during which time he underwent a battery of tests. Ultimately, Noble was found to have a “rare bipolar disorder, with caffeine as the final trigger,” his attorney says.

After a bench trial, Washington Superior Court Judge David Frazier granted Moorer’s motion to acquit Noble by reason of insanity. He is now receiving outpatient treatment under the court’s supervision. Among other requirements, Noble is no longer allowed to drink coffee.

Noble isn’t the only defendant to argue that caffeine played a role in his actions. An attorney for Stephen Coffeen contends that he was insane when he allegedly suffocated his 83-year-old father in St. Petersburg, Fla., in December 2009. Coffeen, originally from California, says his mental state was at least partly due to drinking too many Red Bulls, a caffeine-laden energy drink.

In a third case, Woody Will Smith of Dayton, Ky., unsuccessfully argued that he made a false confession to his wife’s murder as a result of sleep deprivation brought about by too much caffeine. He was convicted in the May 2009 strangling death of his 28-year-old wife.

The strategy has drawn headlines about the “Red Bull defense,” similar to the much-ridiculed “Twinkie defense,” which takes its name from the 1979 trial of Dan White for the fatal shootings of San Francisco Mayor George Moscone and Supervisor Harvey Milk. White argued that he had a diminished capacity to form the intent required for murder, in part because he had been eating high-sugar junk food. (After that case, California replaced the diminished capacity defense with the harder to prove diminished actuality defense, meaning that the defendant had to show that he or she actually lacked intent, not just the capacity to form intent. Congress abolished diminished capacity as a defense to federal crimes in the Insanity Defense Reform Act of 1984.)

Espresso and sucrose-packed sweeties aren’t the only factors that come up in unusual defenses. Defendants have argued that variables as wide-ranging as cold medication, anti-depressants and overstimulation from watching too much television have contributed to their crimes.

But despite Noble’s success with caffeine intoxication, whether it’s a legitimate factor in an insanity defense is very much open to debate. Most states follow the M’Naughten rule for determining insanity: Defendants must suffer from a severe mental disease or defect that leaves them unable to appreciate the nature and quality of their actions or that their actions are wrong.

The bar is supposed to be high, says UCLA criminal law professor Peter Arenella. “By design, the defense is not supposed to be one that’s easily raised in the courtroom,” he says. That’s because, unlike defenses such as justification—which hinge on the theory that defendants sometimes have good reasons for actions that might seem criminal—the insanity defense goes against the fundamental principle that people are morally accountable for their actions.

He says the idea that caffeine can trigger a mental illness to manifest itself is “junk science.” Arenella adds, “It never ceases to amaze me what trial judges are capable of doing in this area.”

Defense lawyers, however, are drawing support from the latest edition of the Diagnostic and Statistical Manual of Mental Disorders (DSM-IV-TR), the guidebook used by mental health professionals. The DSM-IV-TR lists caffeine intoxication as a disorder. Symptoms can include nervousness, insomnia, muscle twitching, and rambling thoughts and speech.

Regardless of whether caffeine intoxication should be considered the basis for an official insanity plea the same as, say, schizophrenia, defendants who are on caffeine might still be able to argue in some states that they lacked the intent to commit a crime. While a jury may not favor a defendant just because the person drank too much coffee, if the lawyer can argue that the defendant wasn’t in his right mind because of a combination of factors including caffeine, the jury may be more sympathetic.

“If you’re a defense attorney you don’t want to be very specific about these [factors],” says Rory Little, a criminal law professor at the University of California’s Hastings College of the Law in San Francisco. “You don’t care on which hook your defense hangs, as long as the jury gets to hear it.”

Little adds that because the defendant’s mental state relates to culpability, anything that can shed light on a mental state is permitted in most—though not all—jurisdictions. In Montana, for instance, defendants can’t argue that they lacked intent due to any type of voluntary intoxication. In general, however, if defense lawyers can find scientific testimony to back up their claims, there’s no reason why people can’t argue that a chemical change in a defendant’s body interfered with the intent required for a crime, Little says.

In Florida, where Coffeen is charged with suffocating his father, his brother, Thomas Coffeen, opposes his attempt to mount an insanity defense and has hired St. Petersburg lawyer Allen Allweiss to help garner publicity.

Allweiss disputes that sleep deprivation resulting from too much caffeine could have sparked Coffeen’s actions. “You’d have to consume tons of this stuff, literally, to be in any way adversely affected to the extent that it would induce a psychotic break and warrant imposition of an insanity defense,” Allweiss says.

He says Thomas Coffeen is prepared to testify that his brother had been staying with him before their father’s death and hadn’t been drinking Red Bull or other caffeinated beverages, wasn’t sleep-deprived and didn’t show any signs of psychosis. Allweiss adds that Stephen Coffeen initially said he suffocated his father in self-defense.

“No one kills another without some emotional instability, but that’s not the same thing as being insane,” Allweiss says.

Coffeen’s lawyer, George Tragos of Clearwater, says the defense isn’t as simple as caffeine intoxication. “There are a myriad of issues,” he says, adding that Coffeen suffers from other mental conditions. “Caffeine may be a factor, but it is not the diagnosis.”

He says that three separate doctors have examined Coffeen, and that their conclusions support a finding that he’s insane.

For all of the media attention devoted to claims that caffeine, or other commonly ingested substances, can cause insanity or contribute to crimes, the likelihood of success in an insanity or diminished capacity defense overall is extremely low, according to Little.

“These defenses are offered pretty frequently, but it’s very rare for juries to believe them,” he says.

That appears especially likely in the case of caffeine. “It’s a dangerous defense,” Little says. “Almost everybody is familiar with having too much coffee, and they don’t kill people or confess to murders they don’t commit.”