Klein: Judicial independence 'not up for negotiation' 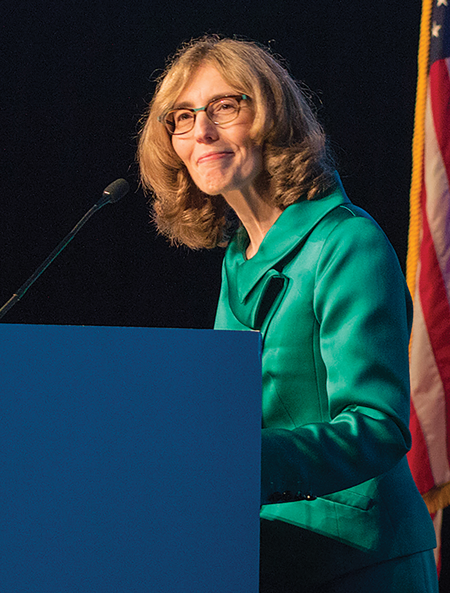 ABA President Linda A. Klein, speaking to the association’s House of Delegates, issued a call to arms for lawyers to defend the rule of law in response to a spate of attacks on law in general and the judiciary in particular by the Trump administration, though the name went unmentioned.

“Make no mistake: Personal attacks on judges are attacks on our Constitution,” Klein said during the ABA Midyear Meeting in Miami. “Let us be clear. The independence of the judiciary is not up for negotiation.”

Klein, an Atlanta lawyer and senior managing shareholder of Baker Donelson, noted that there has been a lot of talk about protecting borders, and she confirmed that every country has a right to do so.

But the United States has due process protections, even for noncitizens. Klein said lawyers need to take the lead in what is “our defining season.”

In response to President Donald Trump’s January executive order on refugees and immigrants, Klein said that those swept up in immigration enforcement should be given hearings before impartial immigration judges.

She also pointed out what she considers to be another vital border: “It’s our Constitution and the rule of law it embodies. And we as lawyers are called upon to protect it. As Winston Churchill put it: ‘Never give in. Never, never, never, never!’ ”

Klein’s speech preceded resolutions, filed after the midyear meeting was underway, concerning alleged breaches of law and other problems with President Trump’s executive order on immigration. Those resolutions were passed on voice votes.

Klein said the association is concerned about significant portions of recent executive orders that “jeopardize fundamental principles of justice, due process and the rule of law.”

“It is vital that our judiciary remains independent and free from political pressure—independent from party politics, independent from Congress and independent from the president of the United States himself,” Klein said. “There are no ‘so-called judges’ in America. There are simply judges—fair and impartial. And we must keep it that way.”

Klein also spoke of the need for Congress to fill vacant seats in the federal judiciary with qualified, vetted candidates; the need for adequate funding for the Legal Services Corp.; and the need for bipartisan criminal justice reform.

The full text of Klein’s remarks is on the ABA News website, americanbar.org/news, in the “Key Issues” section under “Stories, Releases and Statements.”