Last of the Old Guard 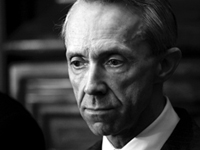 Washington watchers were stunned this spring by the fast sequence of Penn­sylvania Sen. Arlen Specter’s switch from the Republi­can Party and Justice David H. Souter’s decision to leave the U.S. Supreme Court.

Some point to a political connection: Specter’s swap to the Senate Democrats puts the party near an anti-filibuster majority. That would make it easier to approve Souter’s successor.

But there’s another connection: the loss of the moderate Republican. Fewer in the party of Lincoln take the lead in advancing civil rights, privacy and church-state separation.

“Souter thought of himself as a lifelong Republican and conservative, as the terms were used” in his native New Hampshire, says Syracuse University professor Thomas M. Keck, author of a Souter profile in the 2003 book Rehnquist Justice. “What a conservative meant to Souter is different from what it means to Republi­cans now.”

Souter’s Northeastern Republicanism is a relic of the Civil War and Reconstruction, writes East Carolina University professor Tinsley E. Yarbrough in his 2005 biography of Souter. It is not, he writes, “the new Republican Party that depends so heavily on appeals to racially and politically conservative white Southerners and religious fundamentalists.”

In fact, says Harvard Law School professor Mark Tushnet, the Rehnquist court was really divided between the two types of Republicans. On one side were backers of Barry Goldwater and Ronald Reagan, who opposed the legal tradition from the New Deal.

On the other were Souter and Justice Sandra Day O’Connor, who “drew on more traditional Republican Party themes to temper and resist a transformation of constitutional theory,” writes Tushnet in his 2005 book, A Court Divided.

Stare decisis contributed to Planned Parenthood of South­eastern Pennsylvania v. Casey, the watershed 1992 ruling that upheld the basics of a woman’s right to seek an abortion.

That was no surprise: Harlan was Souter’s model. Harlan went “out of his way to show that we judges aren’t just making this up,” says Keck.

Contemporary Republicans were aghast. “Conser­vative Republicans of the 21st century were upset with him,” says University of Pennsylvania professor Kermit Roosevelt, a Souter clerk in 1999-2000.

“Instead of turning the court to the right, as President George H.W. Bush hoped,” says Ilya Shapiro, senior fellow for constitutional studies at the Cato Institute in Washington, D.C., “Souter kept the court just where it was. He is thus more famous for what he is not than what he is—and his retirement, to many people, sig­nifies the ‘end of an error.’ ”

Souter also is a history buff. His “lasting legacy is a series of opinions in which he directly grappled with conservatives on the grounds of history,” Keck says.

He often dueled with Justice Antonin Scalia, the court’s other student of history, over details of the Constitu­tion’s historical founding.

Nor has Souter gotten sufficient credit for his historical knowledge. “Being a historian allows him to be confident in the arc of history,” says Boston College law professor Kent Greenfield, a Souter clerk in 1994-95.

And empathetic. Although it’s not among Souter’s most memorable decisions, Greenfield recalls working on the 1995 criminal law case Kyles v. Whitley. The defen­dant was a “down-on-his-luck black male in Louisiana. If you can find a person more unlike Souter, I defy you.”

As Souter leaves D.C. to return to New Hampshire, the question arises: What brought him from his Thoreau­vian life to the pressured cabin of Washing­ton? Says Greenfield: “It is as public service—he is someone who serves the Constitution and country.”

Bell Atlantic v. Twombly, 550 U.S. 544 (2007)
Antitrust and other claims must consist of enough fac­tual matter to suggest an agreement was made. Writing for the majority.

“One of the most significant business and civil procedure cases of the Roberts court. The court’s willingness to jettison language from Conley v. Gibson [1957]—without any request to do so from the parties—was striking and has had a dramatic effect on federal motions practice. The court’s decision has been cited literally thousands of times since it was handed down.”
—Paul Clement, U.S. solicitor general (2005-2008)

“One of the most underappreciated cases of that term. Because it deals with dry issues of civil procedure, Souter’s opinion established a heightened pleading standard for antitrust claims that has begun to spill out into other types of civil suits.”
—Ilya Shapiro

Bush v. Gore, 531 U.S. 98 (2000)
The controversial and complicated ruling that ordered, in effect, a stop of the presidential election recount. Writing in dissent.

“Each of the four dissenters writes an opinion, but Souter’s is remarkably straightforward and to the point: None of these [majority arguments] has any merit, and if they did, the solution would be to send the case back.”
—Thomas Keck

“It reveals some heartbreak with the court—why in the world don’t you let counting go on?” —Kent Greenfield

“More famous than Souter’s opinion here is his embittered reaction to the case, which further soured him on the work of the court and life in Washington.”
—Ilya Shapiro

“Souter’s opinion for a unanimous court correctly affirmed the expressive associational rights of private organizations. While significant at the time, and of continued precedential value, the case’s ostensible controversy was diffused by the court’s unanimity.”
—Ilya Shapiro

“A fascinating example of judicial craft. … The decision, he is telling readers, expresses no hostility to gays but a respect for individuals controlling the expressive content of their communicative activities.”
—Robert Peck, Center for Constitutional Litigation

Kansas v. Marsh, 548 U.S. 163 (2006)
Allowed a state law that shifted to the defendant the burden of proving mitigation in death penalty cases. Writing in dissent.

“Another theme in Souter’s opinions was that he had a real ability to see the people behind the case, the effect of law on individuals. He was not just a formalist.”
—Kermit Roosevelt

“This is probably his most famous writing in a death penalty case, most notable for his discussion of the rise of DNA testing and its role in exonerating death row inmates.” —Ilya Shapiro

“A great debate with Scalia on history: ‘Scalia’s dissent is certainly the work of a gladiator, but he thrusts at lions of his own imagining.’ ”
—Thomas Keck

“He believes there is a strong division between church and state. … He didn’t like to see government funds go to religious principles.”
—Kermit Roosevelt

“In an early indication of his views on the establishment clause (together with Lee v. Weisman), Souter rejected the view that the state was making its districting decision on cultural, as opposed to religious, grounds.”
—Ilya Shapiro

Lee v. Weisman, 505 U.S. 577 (1992)
The inclusion of clergy to offer prayer at official public-school ceremonies violates the establishment clause of the First Amendment. Concurring with the majority.

“Souter takes on Scalia [regarding the history of the First Amendment]. Souter wrote that the fact that the founders fell short of their own ideals doesn’t change the ideals.”
—Thomas Keck

“Coming in the same term as Casey, with this vote, Souter solidified the ‘traitor’ label conservative groups have attached to him ever since.”
—Ilya Shapiro

Souter is “a deeply religious person … animated by his distaste for government’s effect on religion. He doesn’t want government to tell people what the Ten Commandments are.”
—Kent Greenfield

“On a day when the court released two seemingly contradictory opinions in Ten Commandments cases … Souter emphasized the religious purpose of the display as determined by its context and history.”
—Ilya Shapiro

“McCreary represents not the words of a recluse, but of a person who understands how the world really works. He admonished those who would use the machinery of government for religious ends that ‘the world is not made brand new every morning.’ ”
—Robert Peck

Metro-Goldwyn-Mayer v. Grokster, 545 U.S. 913 (2005)
Promoters of copyrighted work violate the law when they infringe with peer-to-peer technology. Writing for the majority.

“It gives lie to the idea that he is irretrievably mired in the 19th century. The legal community and high-tech community found it sensible and workable.”
—Kermit Roosevelt

“The defect of the opinion is that it assumes that other judges will routinely be able to make the same careful decisions and distinctions he makes in the footnotes.”
—Rebecca Tushnet

“A landmark for bringing the court’s copyright law into the digital age. A justice known for eschewing television demonstrated a marked degree of technological sophistication.”
—Paul Clement

Planned Parenthood of Southeastern Pennsylvania v. Casey, 505 U.S. 833 (1992) Upheld the right to an abortion and held that state statutes may not impose an undue burden on a woman. Writing for the majority (with Justices Sandra Day O’Connor and Anthony M. Kennedy).

“Casey marked Souter’s coming-out party. The onetime ‘stealth nominee’ made an audacious statement about his independence of mind and his unwillingness to be pigeonholed.”
—Robert Peck

“It was a surprise that Souter and two other [Republican] appointees came together against overturning Roe. It was long a project of the Republican Party, but three wouldn’t do so. A good illustration of his conservatism, influenced by stare decisis.”
—Kermit Roosevelt

“It shows his influence very early in his tenure, his ability and willingness to work with others, to cobble together some compromise.”
—Kent Greenfield

“This is arguably Souter’s biggest claim to fame, and in his second year on the court it signaled his move left after a brief flirtation with originalism.”
—Ilya Shapiro

“Souter again argues on history. … It’s a refusal to allow conservatives to own constitutional history themselves. … Souter says [history is] important, but he reads history differently.”
—Thomas Keck

“Souter, writing in dissent for himself alone, cherry-picked from the Federalist Papers to argue for the federal government’s powers to commandeer state officials.”
—Ilya Shapiro

“Though not generally viewed as an originalist, he found resort to the historic record, as expressed by advocates for the Constitution, telling.”
—Robert Peck