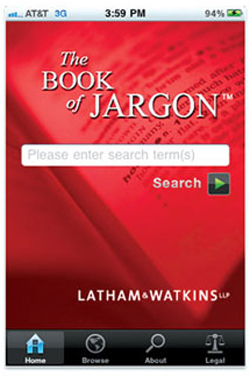 If the term “Canadian wrapper” makes you conjure Drake, then you might think about downloading the Book of Jargon to your iPhone.

The app, developed by Latham & Watkins, provides a glossary of U.S. legal and regulatory terminology, along with capital market and banking slang to help make financial jargon a little less daunting for the uninitiated. It was released in September.

The app was the brainchild of Kirk Davenport and Alexander Cohen, co-chairs of Latham’s capital markets practice group. “What they were able to do was take terms used on a daily basis and present it for people who haven’t had [corporate finance and banking] experience and aren’t familiar with the phrases,” says Latham’s chief information officer, Kenneth Heaps.

Clearly there are plenty of people clamoring for knowledge in the area. In the first month it was available, the free app was downloaded some 5,700 times, according to Heaps.

The firm plans to build on the success of its foray into the app market. An app focusing on project finance terminology will be launched in the next few months, and another app interpreting the United King dom’s capital markets jargon is in the works, Heaps says.

Are you smarter than a Latham capital markets lawyer? Test your knowledge by matching the descriptions to the terms below:

1. An acronym for “excess cash flow.”

2. The impermissible offering of, or publicity for, securities during the prefiling period.

5. A disclosure attached to the outside of a foreign offering document with information required by this North American country when presenting securities for sale.

7. This term, which means “slice” in French, refers to an individual class or series of bonds within an offering (which may have different ratings) or to in dividual credit facilities within the same credit agreement.

8. A tactic used by a corporation that is the target of a hostile take over bid in which the target issues a large number of bonds that must be redeemed at a higher value if the company is acquired. In the event of a takeover, the debt will expand, just as macaroni expands when cooked.

9. In a hostile takeover sit uation, when a takeover target company launches a tender offer for the company that is trying to acquire it.