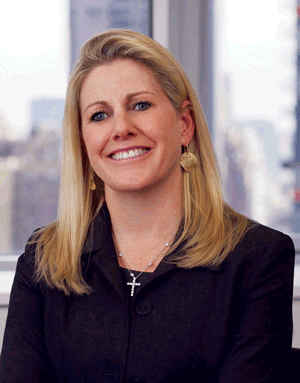 Not many first-year associates would have the courage to march up to their firm’s chief operating officer and boldly ask for help with their student loans.

Sharon Casola did. The result is that her firm, Latham & Watkins, soon partnered with a lender to help associates refinance their debt.

More than 150 Latham associates have taken advantage of the program, reports LeeAnn Black, the COO Casola so boldly approached. Their savings will amount to $4.75 million in interest (an average of $31,000 per associate) over the life of the loan they refinanced.

“The thing I’m most proud of is that I’ve spoken to 15 or more people at other firms,” Black says. “They’re starting to implement programs. It isn’t about us. It’s about getting that debt load off associates’ plate.”

Now a second-year associate at Latham, Casola says her annual law school tuition was $50,000. By the time she graduated in 2014, the interest that had already accrued—even though she hadn’t been required to begin paying her loans back—brought her total debt load to $170,000.

The worst part? Casola’s interest rates ranged from 5 to 7-plus percent at a time when mortgage interest rates were dipping as low as 2.5 percent. But there was virtually no market for student loan refinancing in the years after the Great Recession until the student loan refinance companies Social Finance Inc. and CommonBond emerged online in late 2011—and their offerings were limited.

If you’re keeping score, the terms of Casola’s loans translated to a $1,900 monthly payment.

What started as a joke with a partner—the firm represents major banks; can’t it leverage those relationships to help associates refinance student loans?—turned serious.

“The partner encouraged me to speak with LeeAnn,” recalls Casola. “She gives a state-of-the-firm address to all attorneys, and after her address, I went up, quickly introduced myself, told her my student loan interest rates were exceedingly high, and asked if there was any way we could partner with one of our clients to refinance them.”

Black heard Casola’s plea. Just a few months later, in April 2015, the firm announced a loan refinancing program with First Republic Bank. The institution—which wasn’t a client of the firm but a recommendation from a partner who banked there—declined to comment for this article.

Associates can refinance $60,000-$300,000 in student loans at variable interest rates (in June, they ranged from just under 2 percent to just under 3 percent) through First Republic, according to Black. Loans can be bundled, including with those of spouses and family members.

The bank requires associates to undergo an in-person interview and meet underwriting requirements. The drawback is that by refinancing federal loans into private loans, associates lose their ability to pause payments during a hardship.

First Republic also requires associates to open an account and deposit 10 percent of the loan amount with the bank. Black recognized the liquidity requirement might be an insurmountable hurdle, so the firm agreed to guarantee those amounts for the first year of each associate’s loan.

Kirkland & Ellis also announced a program in April with First Republic, according to Steve Ritchie, a partner in the firm’s Chicago office. Associates in areas in which First Republic has a physical location—those in New York and California—can participate.

Debevoise & Plimpton has teamed up with not just First Republic but also Citizens Bank to offer refinancing options to its U.S. staff members who meet the lenders’ loan standards. Skadden, Arps, Slate, Meagher & Flom says it rolled out a program with Darien Rowayton Bank in addition to First Republic and Citizens Bank.

The irony of this tale? Casola refinanced electronically with SoFi in late 2014, but hasn’t refinanced under Latham’s program, even though she could reduce her payments even further. The in-person interview has been hard to arrange, and she hasn’t had time to move her banking to the institution.

“Probably the first thing on my to-do list is to look into refinancing again,” she says.

Casola is now paying $3,500 a month—several times more than her refinanced minimum payment. If she maintains that pace, she’ll have saved $30,000 over the life of her loans and paid them off in just four more years.

This article originally appeared in the October 2016 issue of the ABA Journal with this headline: “Firm Backing: New Lawyers get an assist on their student loan debt.”