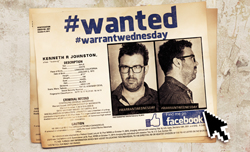 Social media-savvy types know all about the popularity of posting trends like Throwback Thursday and Man Crush Monday. Now law enforcement agencies are jumping on the bandwagon with Warrant Wednesday.

Across the United States and Canada, police departments are soliciting tips—and then often apprehending criminals—by putting warrant posters on their Facebook pages and Twitter feeds.

“We are very proud of the success of Warrant Wednesdays, not only in the number of arrests that have resulted from the postings, but for the attention it has generated on our Facebook and Twitter accounts,” says Darcy Wells, a spokeswoman for the New York State Police, which began posting warrant posters on its Facebook page in late 2013. “We always see our biggest spikes in page activity on Warrant Wednesdays. We had 15 arrests in 2014 as a direct result of these postings and a total of 29 arrests due to social media tips in general.”

The posts are electronic versions of traditional wanted posters, including a photo, description of the individual and crime, and a contact number for tips. Rather than post tips in response, people are encouraged to call or email information about the suspects to protect their anonymity.

Police departments and sheriff’s offices in Colorado, Illinois, Ohio, Oklahoma and other states, as well as Calgary, Canada, have also jumped on the bandwagon, posting warrants—often searchable with the hashtag “#warrantwednesday”—each week. Other law enforcement agencies in Florida and Indiana have launched similar “Turn ’em in Tuesday” campaigns.

Sometimes the followers are the alleged criminals themselves. Last year, as was widely reported in the media, a woman unhappy with what she felt was an unflattering mug shot of herself posted on Facebook by the Columbus, Ohio, Division of Police called the department to complain. When 34-year-old Monica Hargrove—accused of giving a woman a ride to a pharmacy to get a prescription filled and then robbing her at gunpoint—asked that the Warrant Wednesday post be taken down, the detective she spoke with encouraged her to come to the police station to talk about it. When she arrived, she was arrested on aggravated robbery and kidnapping charges.

Even worse for Hargrove: The arrest generated attention from international news agencies, and her mug shot remains on the department’s Facebook page.

This article originally appeared in the March 2015 issue of the ABA Journal with this headline: “#Warrant Wednesdays: Law enforcement jumps on a social media trend to help find criminals.”