The numbers: 78 percent of law school admissions officers express confidence their 2016 application numbers will increase. There was a 7.6 percent decline in law firm jobs secured by the class of 2015.

Two studies from this fall inspire very different impressions of the state of the legal profession, at least in its opening stages.

The Kaplan Test Prep Survey found law school admissions officers more optimistic that law school applications would increase for 2016. Bouyed by estimates of an increase in law school applicants and predictions that “60 or 70” of the top-tier law schools (by US News rankings) would see enrollment growth, 78 percent of the 111 law schools participating in the survey expressed confidence that they would be among those showing an increase in applications. That compared to only 46 percent of those responding to a 2014 survey. 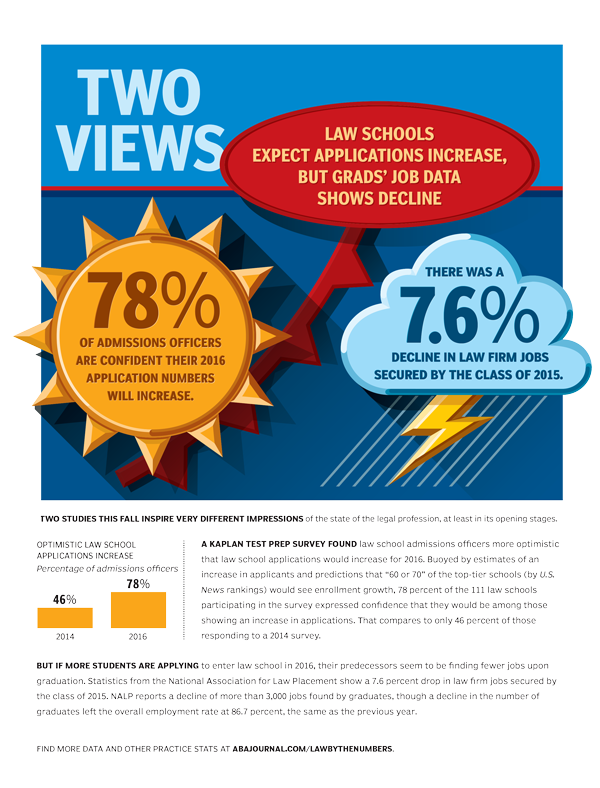 But if more students are applying to enter law school in 2016, their predecessors seem to be finding less jobs upon graduation. Statistics from the National Association for Law Placement showed a 7.6 percent drop in law firm jobs secured by the class of 2015. NALP reported a decline of more than 3,000 jobs found by graduates, though a decline in the number of graduates left the overall employment rate at 86.7 percent, the same as last year.