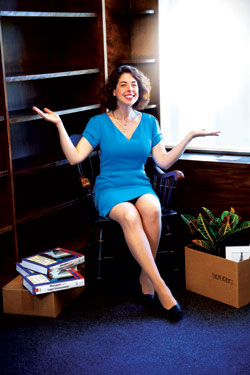 This year, Anna Palmer’s entrepreneurial journey came full circle when she returned to the place where her dream took shape: Harvard Law School.

Palmer, who credits a law school course in entrepreneurship and company creation with inspiring her career path, was in class this time as a guest speaker, sharing her wisdom with law students considering similar ventures outside traditional legal practice.

“The training I got in law school put me in a really good spot to start a company and start it wisely,” says Palmer, 28, who co-founded the Boston-based Fashion Project with a law school classmate immediately after graduation. The business collects posh apparel and accessories and then sells the tax-deductible gifts on behalf of charities like Dress for Success and the March of Dimes.

Changes in the legal job market—and in the overall economy—are compelling new lawyers like Palmer to think creatively about how to put their degrees to work, according to Liz Brown, author of Life After Law: Finding Work You Love with the JD You Have.

Brown says the shrinking number of private sector jobs has forced newer graduates to consider a wider range of careers from the outset. Law schools are beginning to recognize this need, she says, starting programs in law and entrepreneurship, law and business or both. James Leipold, executive director of NALP, says that in the wake of the economic downturn, law schools have increased programming on alternative career options. The shift may be partly due to student interest, but it also stems from the reality that “a percentage will have to find [alternative careers] because private practice jobs aren’t there the way they were.”

NALP statistics confirm the trend. In the early 1990s, law school grads jumping right into business and industry careers numbered less than 8 percent. For the past several years, though, that percentage has more than doubled, with about 18 percent of new grads starting their careers in the business arena. For some recent law school graduates, the contracting legal market may be a blessing in disguise, says Brown, who believes many new JDs would find greater personal and professional fulfillment in business. “Starting a business is at least as challenging as starting a legal career, but it invokes and rewards a different set of skills,” Brown says. “Starting their own business offers them the opportunity to create and develop something they are passionate about, and that fills an important niche.”

“Law school is such a great time to explore your options,” says Palmer, who chose her final-year courses with an entrepreneurial career in mind. “Start early and go full steam, and try to launch by the time you’ve graduated.”