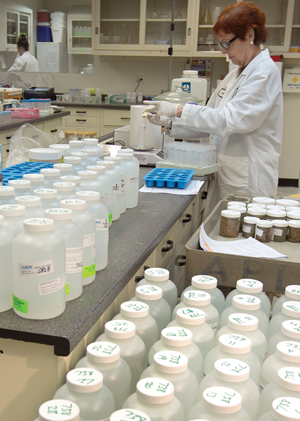 The water crisis in Flint is unique in many respects, but the city isn’t alone in facing allegations regarding lead in the water supply. This year alone, lead-poisoning lawsuits were brought against officials in Chicago and New Jersey, and another lawsuit in Washington, D.C., is expected to go to trial soon.

The lawsuit in Chicago, which was filed in February by three residents, alleges that an initiative to replace water mains resulted in higher lead levels in the drinking water. The plaintiffs allege that officials didn’t adequately inform residents how to reduce their risks. For example, the complaint says the American Water Works Association recommends that after a service line replacement, people should remove the faucet aerator and run cold water for at least 30 minutes.

In Newark, New Jersey, a group of parents sued the city, Gov. Chris Christie and other officials over contaminated water in the schools. That lawsuit came several months after officials said that about half of Newark’s schools had unacceptably high lead levels in the water. 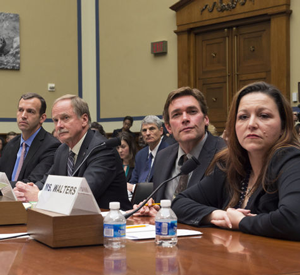 LeeAnne Walters and Marc Edwards sit beside each other as witnesses before a House committee hearing on the Flint situation earlier this year. AP Photo.

A 2009 lawsuit alleging lead poisoning as a result of water contamination in Washington, D.C., centers on alleged contamination dating to 2001. Virginia Tech’s Marc Edwards—who also tested the water in Flint—told a congressional panel that the lead contamination problem in D.C. in the early 2000s was “20 to 30 times worse” than Flint’s, according to the Washington Post.

Despite the attention drawn by lawsuits over water poisonings, the greatest proportion of lead poisoning cases in children are caused by paint in deteriorating homes, according to Anita Weinberg, a clincial professor at Loyola University Chicago School of Law and chair of Lead Safe Illinois.

Weinberg points out that lead in the water supply may have different consequences than lead in paint, given that people can take steps to reduce the risk of poisoning due to water contamination. For instance, she says, most filters will screen out lead from the water. Also, simply letting the water run for a while before drinking from the tap can help get rid of the lead. “Whether or not you’re at risk because of lead in water has to do with how long your water has run before you drink from a faucet,” she says.

Who’s to blame for poisoning of Flint’s water?
The Flint Water Crisis: A Timeline

Traditionally, young children have suffered lead poisoning after eating paint chips (or dust from chips that had disintegrated). The federal government banned the use of lead in home paint in 1978, but many older homes still have lead-infused paint inside. The Centers for Disease Control and Prevention estimates that children in at least 4 million households are being exposed to high levels of lead, and that half a million U.S. children under the age of 6 have blood lead levels higher than 5 micrograms per deciliter.

Numerous lead-poisoning lawsuits have been brought against landlords. In addition, some plaintiffs have attempted to proceed with class actions against paint manufacturers. 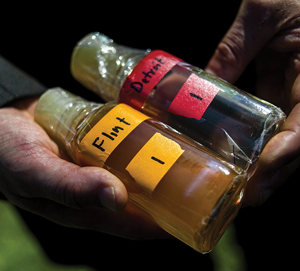 Marc Edwards, an environmental researcher, compared the water from Flint and Detroit in 2015. AP Photo.

The lead paint industry defeated those cases in seven states, but in 2013 Judge James Kleinberg of Santa Clara County, California, ruled that Sherwin-Williams Co., NL Industries Inc. and ConAgra Grocery Products Co. violated California’s public nuisance law by promoting lead paint even though they should have known of its dangers.

Kleinberg ordered the companies to pay $1.15 billion to 10 local governments that sued, including Los Angeles County and the cities of San Diego and San Francisco.

The defendants have appealed the decision.